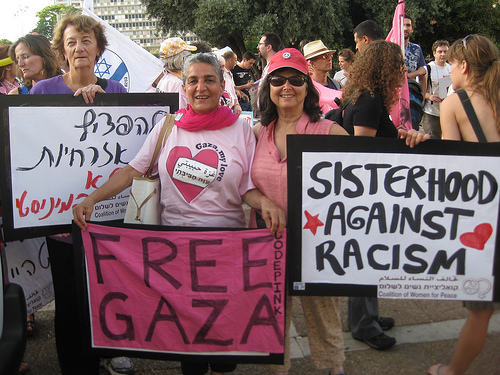 The opening announcement at our first CodePink and Coalition of Women for Peace meeting was stunning and sobering: a 35 year-old Palestinian father of two children, with another child on the way, was killed at a nonviolent demonstration in Ni’lin. He had been shot in the chest by Israeli Defense Forces (IDF). We had been asked, as a means of introduction, to choose a word that best described how we were feeling at the start of our delegation’s efforts to reach Gaza and to build a playground there. The word I chose was “grieving,” the only word I could think of after hearing of this young man’s death.

On the plane ride to Israel, I had just begun reading Judith Butler’s most recent work, Frames of War. In this book, Butler asks why it is that some lives are grievable and others not; why some lives are to be saved while others are shed, if even noticed, particularly during times of war. In one of the book’s many memorable phrases, Butler claims that our efforts to build borders between one another would be better spent appreciating how “bound up we are in one another.” This phrase has become a touchstone for me as I make my way through the early days of the delegation. It doesn’t allow me to slip into the facile duality of “friend and enemy” but challenges me to live  truthfully, as one who, indeed, is deeply bound to other human beings.

As we made our way round the communal introductions, I was deeply inspired by the stories and presence of those who gathered that evening. Among us were two young women of the Shministim (conscientious objectors), one of whom had just been released from a military prison for refusing to serve in the IDF. Others were Israeli and Palestinian women who work together in the Coalition of Women for Peace. On their way were three delegates from CodePink’s Cairo delegation who had just finished building a marevelous “pink playground” for children in the Gaza Strip. Here were folks who well understood “being bound” to one another and who were determined to “pay up” in order to live that insight.

One of the delegates reminded us that 2009 was the last year in the decade that the United Nations declared was to be a decade devoted to the development of a culture of nonviolence for the sake of the world’s children. I thought, once again, of that young father and of the children who were now left behind. Oh, how we adults have failed our children and one another! The consensus of the community gathered that evening was that each of us was responsible for helping to create this culture of nonviolence. I thought of this vow while listening to a conversation between one of our delegates and a young man working the desk at our hostel. For this young man, any effort to help the Palestinian people was seen as a threat to the security of Israel, which meant ultimately, to his family. My sense is that the Palestinian father was also working for the security of his family. I wonder why this common concern for security so often ends in the death of another? If we are bound up in one another, then how would killing another add to anyone’s security? This is a question that I hope to dwell upon in the coming days.

As we make our way to Gaza, there will be plenty of ways to practice “being bound up in one another.” One of the creative ways of doing this will be the practice of clowning, as we will join the Israeli Clandestine Insurgent Rebel Clown Army (ICIRCA) as well as our own delegation member, Patch Adams, in the effort to bring play and joy into the work of our peacemaking. Another way will be for me to confront the welling sense of fear that I am feeling in anticipation of our work in Bi’lin, a community that sits next to Ni’lin. I had joined a nonviolent demonstration in Bi’lin last summer only to be chased from the scene by the menacing fire of tear gas cannisters shot by the IDF, as it seemed to me, directly at us. I am feeling the desire to explore the energy of this fear, to see what’s there and to find ways of encouraging connection to others and not flight from others. There is an opportunity here that I have vowed not to miss; it’s the opportunity to build the beloved community that Dr. King so often spoke of, and to start that work right within my own heart.

The work to shut down Guantánamo never ends

Why Professor Watchlist gets my teaching values completely wrong

Grief and solidarity on the road to Gaza