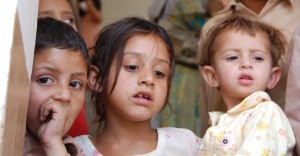 [Editor’s note: I just received another dispatch from Kathy, who is part of a delegation visiting cities and villages in Pakistan through this Saturday. -ES]

In Jayne Anne Phillips’ Lark and Termite, the skies over Korea, in 1950, are described in this way:

“The planes always come…like planets on rotation. A timed bloodletting, with different excuses.”

The most recent plane to attack the Pakistani village of Khaisor (according to a Waziristan resident who asked me to withhold his name) came twenty days ago, on May 20th, 2009.  A U.S. drone airplane fired a missile at the village at 4:30 AM, killing 14 women and children and 2 elders, wounding eleven.

The previous day, some travelers had come to Khaisor, and the villagers had served them a meal.  “This is our custom,” my friend relates.  “It is our traditional way.”  But these travelers were members of the Taliban, and their visit was noted by U.S. forces.  It is possible they were identified through pictures taken by unmanned U.S. drones.  Although the visitors had left right after their meal, the U.S. responded to this act of hospitality by bombing the homes of the hosts early the following morning.

I asked my friend how families cope, when a bomb suddenly blasts their home in the middle of the night.  Do they have any kind of first aid available to help the wounded?  “You see this,” he said, pointing to the long shawl that I happened to be wearing, a customary part of every village woman’s dress, “they try to use this [as a bandage] because it is all they have.”  I imagined the shawl rapidly soaking up the blood of a dying Pakistani man, woman, or child.

On the morning of the 20th, the other villagers had rushed to the section where the missile had hit, hoisting  injured survivors onto their shoulders and carrying them across rough, hilly terrain to the nearest road (about five kilometers away from the village) where, lacking vehicles of their own and with no hope of receiving an ambulance visit, they waited for a car to stop, their only means of reaching a hospital.

The first car they saw did stop, but its driver refused to take any of the wounded for fear that his action would be noted by an unmanned U.S. drone, and that he himself would face the reward for his hospitality which the village had received.

The villagers walked along the road until another car stopped and did agree to take some of the wounded to a nearby center run by the International Commission of the Red Cross.

For three days following the attack, people collected in the village, coming in from all over the region for the funerals.  My visitor told me that whether people know the villagers or not, they will come to pray.  “On the cell phone you get the word,” he said, “Look, this bloody thing again happened. People share the sorrow, but the anger increases.  Everyone says we should get rid of the Americans.”

At the funeral, the villagers showed casings from the missile to demonstrate that it was a U.S. missile that killed their neighbors.

About 40 – 50 families live in the area of the village. My friend said that the people are hospitable and sturdy, tough enough to live in harsh conditions.

Villagers have become accustomed to the drone attacks.  At first, some were paralyzed with fear -but since 2001, they’ve endured about 70 such attacks, and drone surveillance has become a routine fact of life.  Even the children can identify the drones flying overhead.  “When there is a drone up above the children don’t play in a group because they don’t want the drone to hit them,” said our visitor.  The pilots of the drones, looking through monitors at their consoles in Nevada and elsewhere in the U.S., are more likely to mistake groups of people for their designated targets than people standing alone.  Groups of children have been attacked.  “The children scatter and run away, and they stop playing for some hours.”

Asked if he saw any alternatives to the fighting, my friend immediately said that the attackers – the people from the United States – should come and sit with them.  “If they come and discuss and throw away the arms, I hope it will be far better than if they are hitting us and trying to bring the peace through arms.  Even if the peace comes, through arms, we will never forget after 100 years, and we will take revenge.”

My friend has already organized a “jirga”, or discussion, between  local people and Taliban to consider how peace might come to the area.  He asked the jirga members if they wanted peace and they responded, “Yes, why not?  Who is such a person that they would not want peace?  If the Americans stop the drones and go out from Afghanistan and if the Pakistan army stops the mess they are making in our agency, yes, we want peace.”

The U.S., and some segments of Pakistani society, want other things from these villagers.  It’s difficult to know what fuels the ongoing attacks, particularly when media are banned from the areas under attack.

But the duty these villagers were bombed for carrying out, this time, was hospitality.  Strangers come to your home and you feed them.  During my visit here in Pakistan, soon to end, I’ve been shown profound respect and hospitality, although I’ve come here from the land of an enemy, from a country that brings terrifying robotic planes here, constantly surveilling and routinely killing from the skies in a manner reminiscent of science fiction. The drones are a daily fact of life here, brought by visitors; U.S. bombs are now part of their sky: new planets on rotation.

Here, the enlightened West now stands for mechanized death from the skies, “a timed bloodletting with different excuses.”

Yesterday, the “excuse” our visitor described, the rationale for incinerating women, children and elders, was a mere act of hospitality – the extreme, obligatory hospitality shown to friends and enemies alike in this part of the world.

I’m soon to leave Pakistan and its targeted regions. Last week, U.S. envoy Richard Holbrooke and a small delegation left after a short visit. It’s likely that U.S. generals and advisers will continue to shuttle back and forth between the U.S. and Pakistan.

All who come from the U.S. are guests here.

How do we hope to be treated?

Kathy Kelly is a peace activist whose efforts have sometimes led her to war zones and prisons. She co-founded Voices in the Wilderness and Voices for Creative Nonviolence and co-coordinates the Ban Killer Drones campaign.

Why we still need ‘The X-Files’

Visitors and Hosts in Pakistan