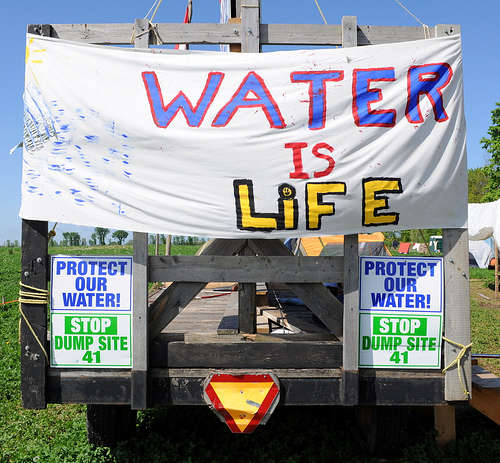 Various campaigners have united to oppose plans for a partially constructed dump site in the Canadian Township of Tiny, just north of Toronto, in Simcoe County. The campaigners who are opposing these landfill site plans have focused on the water contamination that would result from dumping waste on an underground aquifer that runs into the Great Lakes. Provincial and county officials have situated the dump site on the Alliston Aquifer—which otherwise would serve as an exceptionally clean water source. The indigenous inhabitants at three nearby reservations are among the potential victims whose water would be contaminated if the landfill site is completed and used.

The Native Women’s Association of Canada has stressed how the potential dump site “is in close proximity to three First Nations reserves; Rama, Georgina Island and Beausoleil, and it is also the traditional harvesting area of the Métis Nation. Aboriginal peoples have not been consulted about the development of this garbage dump site.” In May, Vicki Monague—an indigenous campaign leader—wrote that:

We have been receiving the support of well over 40 non-native local community members all weekend long who have taken part in our Water Ceremonies and our Songs from the Drum. To my knowledge, this is the first time in Canada that the Non-Native People and First Nations have taken a stand in this region, side-by-side, against the levels of Government. We will continue to stand unified with our White Brothers and Sisters against Site 41.

Our voices have also been heard by Native Elders in Utah and California and we are quickly gaining support from other First Nation communities. Our Sacred Fire has been lit and will continue to burn until our demands are met. We are now inviting all First Nations People in Canada to come and take part in our Peaceful Protest of Site 41. Your First Nations Women need your support. We are going to protect our Heritage Land!

The Stop Dump Site 41! web site lists various supporters who have been opposing the Tiny Township landfill plans. The Christian Peacemakers also have joined campaigners at ongoing blockades and vigils around site 41.  These actions around site 41 have been organized in tandem with rallies, a petition, organized e-mail writing, advertisements, and other opposition from in and around Simcoe County.

In an overview of the campaign in the Toronto Star, David Crombie (a Tiny Township resident) and Maude Barlow (a Council of Canadians spokesperson) have written that:

Site 41 has been hotly contested for more than 15 years, but the Ministry of the Environment finally signed off on the permit and a badly divided county council allowed excavation to begin in early summer. Recently, a growing chorus of voices has called for a one-year moratorium in order to hold the public hearings that never took place and to allow for an independent scientific assessment of the model used to grant the permit, which has never been made public. Proponents of Site 41 question the reason for a moratorium and claim they know enough about the project to move ahead. …

Opposition to Site 41 has grown dramatically. In a recent online poll, 85 per cent of local residents supported the blockade to stop construction. Politicians from all political parties, provincial and federal environmental groups and respected leaders such as David Suzuki have come together to protect the aquifer

Crombie and Barlow also provide information about the Alliston Aquifer as they present their arguments against the landfill site plans.

The Stop Dump Site 41! web site offers various other background and updates. There also are campaign pages on the Council of Canadians web site, where there are multimedia recordings, e-mail-writing campaign forms, and additional information. A thread of comments on the Rabble.ca web site is another of the more relevant web pages associated with the campaign.

Ontario Provincial Police (OPP) officers have arrested protesters who have blockaded further construction at the dump site. The legal status of this blockade is under review in court. This month, a Simcoe County committee also has reviewed a call for a one-year moratorium on the construction of the landfill at Site 41. The call for a moratorium then will be revisited at a Simcoe County Council meeting this August. If it is granted, the moratorium could be a step towards overturning the Tiny Township dump site plans—provided that campaigners are able to make more of a mark on the waste management policies that they hope to amend.

Toban Black is a Sociology Phd student, a weblogger, a photographer, and a community organizer based in London, Ontario. Post-Carbon London is his primary organizing commitment.

An invitation from the Mobilization for Climate Justice coalition

Glimpsing a history of anti-nuclear activism

Why reconciliation and redemption are central to countering white supremacy