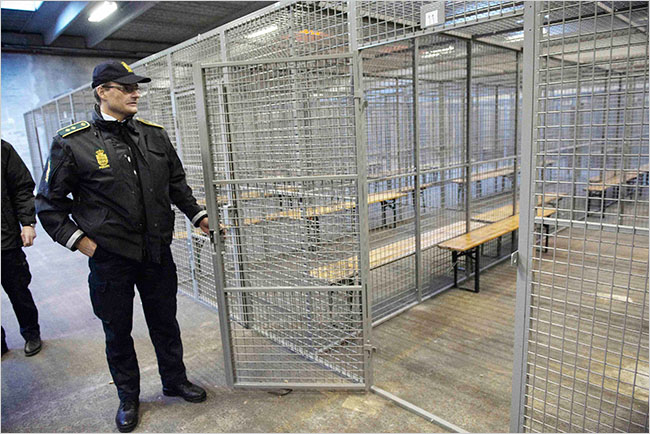 As the UN Copenhagen climate talks began yesterday, a series of strict new laws went into effect. Danish police now have sweeping power to preemptively arrest protesters, enact harsh fines and dole out extended sentences for those engaging in civil disobedience. According to the New York Times, holding facilities that contain approximately three dozen small steel cages and can accommodate up to 350 protesters have already been set up around the city. Police have also been making public displays of their newly acquired anti-riot gear.

All this money and effort has had the effect of turning one of Europe’s most open and democratic cities into a virtual police state for anyone who considers the certain failure of a climate treaty worth protesting. But those not interested in saving the planet–like say, delegates from rich nations–can rest assured that Copenhagen still allows prostitution. In fact, the city expects UN delegates to take advantage of this freedom. But realizing that it is not exactly befitting of a government official attending a landmark conference, the city is requesting that the delegates not patronize Danish sex workers. According to Spiegel Online:

“Dear hotel owner, we would like to urge you not to arrange contacts between hotel guests and prostitutes,” the approach to hotels says.

So, just to be clear, when it wants to dissuade people from taking legitimate action against life-threatening policies, the city of Copenhagen is willing to reform its laws, enact draconian police measures and spend millions in the process. But when it wants to dissuade world leaders from engaging in an act that is illegal in most other countries, during a historic future-in-the-balance conference, the city of Copenhagen sends out postcard warnings.

Of course, this has upset sex workers, who are now firing back at the city by offering a special deal: free sex to anyone who can produce one of the postcards and their COP15 identity card. No joke! What a time to be a sex crazed and completely unaccountable UN climate delegate.

Anti-drone movement prepares for take off