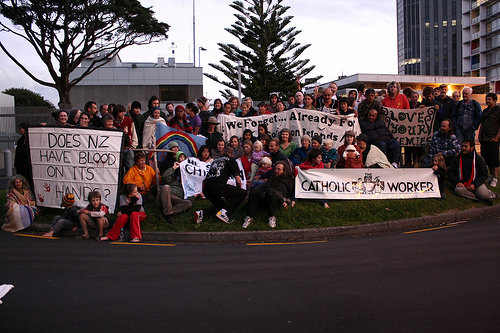 I write this article just a few minutes walk from the district court here in Wellington, New Zealand, where I was delighted to witness the jury’s unexpected “not guilty” verdict in the trial of the three Ploughshares activists in Wellington District Court last week. Adrian Leason, Father Peter Murnane and Sam Land—the three men who were charged with intentional damage and unlawful entry at Waihopai spy base in Blenheim, New Zealand—were acquitted of all charges against them.

At the conclusion of the trial, Father Peter, Sam and Adrian said they felt privileged to have helped uncover the true nature of the spy base. “Our actions in disabling the spy base and stopping the flow of information helped save lives in Iraq,” added Adrian.

“What has been humbling for us to realize is how our witness has impacted on so many people around the world and at home,” said Sam.

“We did not try to avoid the consequences of our actions, because we respect the rule of law although we do believe we are ultimately accountable to a higher authority. We damaged property at the spy base in order to save victims of war and torture. It’s all about Jesus’ command for us to treat all people as our brothers and sisters,” said Father Peter.

Commenting at the conclusion of the trial Waihopai Ploughshares media spokesperson Graham Bidois Cameron said this Ploughshares action is part of an ongoing tradition: “The practice of non-violent resistance and direct action in the cause of peace has a long history in this country—the peaceful resistance to the invasion of Parihaka, and non-violent direct action against nuclear armed warships entering our harbors being just two examples.”

“The actions of Waihopai Ploughshares also need to be understood in relation to an international movement for disarmament and peace,” said lawyer Moana Cole, herself a Ploughshares activist. “Adrian, Sam and Father Peter are part of a rich history of activism in support of those without a voice and the movement is certainly growing.”

Not everyone share’s Moana’s enthusiasm. A cursory glance at most New Zealand mainstream media websites at the moment will highlight the diverse reactions of people across our country to the Ploughshares “not guilty” verdict. Articles, interviews, statements and blog posts expressing everything from great joy, to bafflement, to total outrage are abundant. Supporters of the Ploughshares action see this verdict as a great victory for the global peace movement and a step towards pushing for greater awareness around New Zealand’s complicity in US-led illegal wars. Detractors of the Ploughshares action are mostly either worried that this verdict will set a precedent for other activists to perform similar actions, using the same “greater good” legal defense, or are angry that the men caused more than $1 million worth of damage to government property and “got away with it.”

I can definitely sympathize with the detractors. The law plays a very important role in ensuring peace and security for New Zealand citizens, and Father Peter was right to mention that he and the other Ploughshares activists ultimately respected the rule of law.

However… I’m still firmly in the supporters camp, for main two reasons.

First of all, the trial was held in a district court and the verdict was reached by jury. To my understanding, in terms of setting a legal precedent in New Zealand, the trial has almost nil value (there are plenty of statements from legal professionals on NZ media websites regarding this matter). The main impact of this trial for New Zealand will hopefully be to throw a great deal of fuel on the fire of public debate around the Waihopai spy base, and that can only be a good thing.

Secondly, why would everyday New Zealanders get angry about damage to a base that very few of them have even heard of, and even fewer know anything about? The people I’ve heard talk about it seem to be getting angry simply on principle (“no-one is above the law” etc), with very little knowledge of the specifics around the case. I think this is a mistake, and the judge during the trial rightly reminded the jury that when considering the Ploughshares’ actions, they were to ignore concerns about setting any legal precedent and focus on the particular circumstances that were relevant to this case.

Well, lets look at those circumstances. Waihopai is a mystery to most New Zealanders, and it is this mystery that Adi, Sam and Peter are attempting to shed some light on. Even David Lange, who was acting Prime Minister at the time the base was built, didn’t know what it was really for. Lange says in the foreword to Nicky Hager’s 1996 book on Waihopai, Secret Power, “…it was not until I read this book that I had any idea that we had been committed to an international integrated electronic network”.

Hager’s research, which as far as I’m aware has never been refuted, reveals that Waihopai is part of an international spy network called ECHELON, and is our greatest contribution to US global strategies and ties us firmly into the US war machine. We New Zealanders unknowingly fund this base with our tax dollars to the tune of $50 million a year. That money funds activities which threaten lives around the world. How many innocent people have been killed through the US invasion and occupation of Iraq and Afghanistan which Waihopai assisted? The ongoing war has resulted in horrific war crimes, including more than one million dead Iraqi civilians, torture, and permanent poisoning of parts of Iraq by the use of depleted uranium munitions. Again, we pay for this with our tax dollars. Puts the $1 million damage that the Ploughshares did in perspective, doesn’t it?

This was the case that the Ploughshares presented to the jury. “Evidence presented in the court confirmed that the ongoing war in Iraq is illegal, and causing massive human suffering”, said Adrian Leason. “As an outcome of this trial, we hope that New Zealanders will insist on an inquiry into the activities of the spy base and its links to US-led illegal wars”.

I hope so too.

Will Watterson is an accidental activist with faith-centered leanings towards eco-communalism and nonviolent direct action. He currently resides in Wellington New Zealand, where he works as an education officer for Global Focus Aotearoa, running workshops and events with social justice themes. He also co-manages a youth activism website called Just Focus. His rants about faith, social justice and rediscovering community can be found on his blog No Such Thing As Silence.

More By Will Watterson

What’s wrong with being the world’s most peaceful country?

Jumping on the ‘Brandwagon’

Should we shield kids from a violent world?