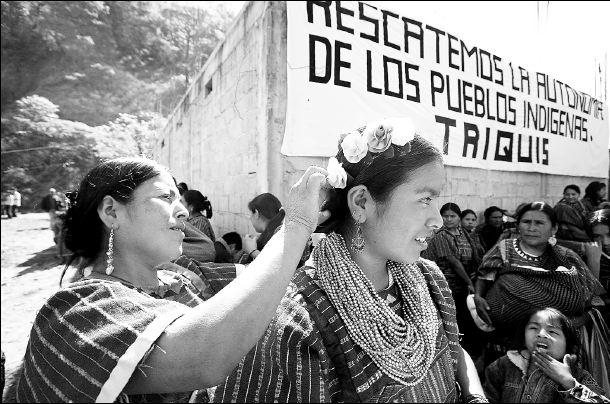 The overlooked area of San Juan Copala in Oaxaca, a poor region in southern Mexico with a mostly indigenous population, has been subjected to continuous government-sponsored violence, leaving the indigenous people suffering for the past few decades. It’s a situation not unlike the one facing the people of Gaza and as such, resistance is brutally repressed.

A case in point occurred on April 27, when an international aid caravan trying to bring humanitarian relief past a roadblock to the besieged Autonomous Triqui Community of San Juan Copala was fired upon by unprovoked gunmen. Many were wounded and two human rights observers, Bety Cariño and Jyri Jaakkola, were killed.

Subsequently, others were detained and disappeared by men claiming to be the pro-government Ubisort-militia (ironically called the Unit for the Social Wellbeing of the Triqui Region) and are affiliated with the corrupt, neoliberal Institutional Revolution Party (PRI). The gunmen enjoyed their impunity backed by the ruthless and repressive governor Ulises Ruiz Ortiz.

The murderous ambush on the caravan backfired, though, and has jump started a non-violent movement of anti-authoritarians and human rights activists throughout the Autonomous Municipality of San Juan Copala. Unhindered by ongoing state violence, they are attempting to pacify the area. As the communiqué has stated:

“We make clear that this resistance struggle has as its final goal to recuperate our history and culture, with a great respect for our mother earth; to achieve development towards the dignified life that we all desire, where peace and justice reign.”

One of these “resistance struggle[s]” is the inhumane five-month-long paramilitary siege in San Juan Copala guarded by gun toting thugs. The siege continues unabated resulting in the destruction of Copala and the oppression of its people:

“There is no electricity, drinking water, or medical attention in Copala. The children can’t go to school because there are no teachers. Paramilitaries shoot at townspeople daily, resulting in the deaths of at least 21 people between last November and May”.

The people of Copala do not know of a normal daily life. Only older women and children are allowed at certain hours of the day to leave the community and bring back food from a nearby town. Ubisort also prevents damaged electricity cables and a busted pipe that delivers the community’s water supply from being repaired, forcing residents to use a contaminated water source. Moreover, sharpshooters who surround the area have kept the community under permanent fear.

Amnesty International’s website explains why the 700 people living in Indigenous Triqui region are being killed:

“San Juan Copala, is one of the communities of the Indigenous Triqui group, one of the poorest and most marginalized ethnic groups in Mexico, declared itself an autonomous municipality in 2007. This means it governs itself through the traditional indigenous practices and does not recognize the authority of existing public officials”

So the presence of the Indigenous Triqui group goes punished because they will not conform to the capitalist ways of the state. This has led to demonstrations by the Autonomous Municipality against international corporations who want to “develop” on (translation: steal and destroy) Copala’s indigenous land. Unfortuantely, these demonstrations have grown more violent over time.

Previous third-party groups like the APPO (Popular Assembly of the Peoples of Oaxaca) have advocated for nonviolence against the government and paramilitary, but have also vandalized and used weapons when under attack. The Autonomous Municipality do not want this to be the case and want to keep this peaceful:

“We don’t have weapons, we don’t need them: we know that with organization and with the solidarity of the people of Mexico and of the world we will soon attain a life of peace, with justice and dignity”.

Meanwhile, another international solidarity effort, planned for June 7th and 8th, is underway. Governor Ruiz Ortiz has already promised to block what’s being called the “Bety Cariño and Jiri Antero Caravan” and deport any foreigners on it and Rufino Juárez Hernández, leader of Ubisort, announced (or threatened) that “not even the minimal [security] conditions” would help the convoy and that “lamentable events could occur.”

Considering this attempt to bring humanitarian-aid past a suffocating blockade and the violent military opposition towards a small community and its demonstrations—not to mention the ignorance of most news institutions—it’s hard not to see an eerie parallel between the situation in San Juan Copola and Gaza. But the far more important similarity between these two regions is that both are filled with vibrant people who will not stay silent about their fallen and oppressed comrades. Perhaps both can learn from one another in their continued efforts for nonviolent self-determination.