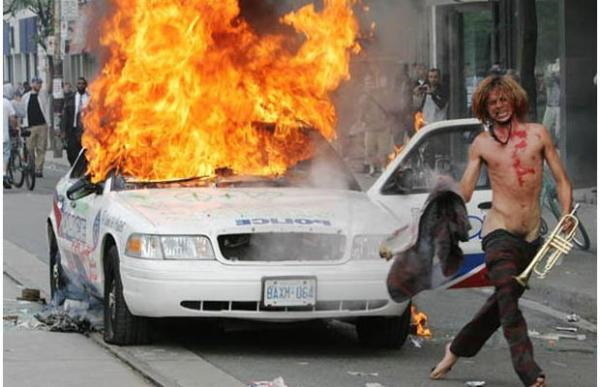 During Saturday’s nonviolent protest of about 5,000 activists outside the conference center in downtown Toronto, where leaders of the G20 were meeting, several hundred masked figures dressed in black broke away from and started torching police cars and smashing store fronts. Not only did this steal the attention away from the peaceful protesters, but it got a lot of them hurt and arrested. By the end of the day’s events, the police had beat activists and journalists, fired tear gas and rubber bullets and arrested more than 560 people.

Just about anyone following the G20 could have seen this coming. In the weeks before, Canada was busy building what The Guardian called “the toughest security cordon in the history of the summit,” spending an estimated $1 billion dollars and bringing in 19,000 police officers. So, clearly it was ready to use them. But more importantly, why was it so ready to use them?

Some might point to the threat of vandalism promised by a group of Ontario anarchists a month before the summit. In a message to its members, the Southern Ontario Anarchist Resistance (SOAR), announced its plan to stage “militant protests” and to “humiliate the security apparatus” by using “a variety of tactics”—a common phrase used by anarchists who perceive nonviolent action as ineffective. But as is so often the case, such dismissal stems from a complete lack of knowledge as to the dynamics of nonviolent action.

In what sounds like a reasonable appeal, SOAR told its members, “Respect for diversity of tactics also means not smashing things while we’re part of the labour child-friendly march, and remembering that although we might think certain tactics are pointless/annoying, we should not needlessly antagonize those people.”

What these anarchists don’t seem to realize is that nonviolent campaigns lose their power and are generally rendered pointless when they are associated with people who act violently.

This is why governments are always eager to paint their critics as violent, and sometimes, as police in Quebec did two years ago, plant saboteurs to incite violence. In fact, there’s been some speculation that the security forces in Toronto encouraged acts of destruction. In regards to the three police cars that were set on fire, The Guardian wrote:

Questions are being asked as to why the police chose to drive the vehicles into the middle of a group of protesters and then abandon them, and why there was no attempt to put out the flames until the nation’s media had been given time to record the scenes for broadcast around the world.

If this is true, it doesn’t really say much for SOAR and the effectiveness of its “variety of tactics” approach. It suggests that they are considered more of a convenient pawn than a serious threat. In fact, the real threat is a strong nonviolent movement able to appeal to the public by exposing the illegitimacy of the G20. It’s only on the surface that the security apparatus is able to justify a massive crackdown based on threats of vandalism. No mega-corporation is facing serious existential danger because of some smashed windows.

Of course, this anarchist offshoot has argued the contrary, saying that since mass audiences “generally dismiss every form of direct action and every radical cause” (a claim that is not supported), there isn’t any utility in trying to win the public over to a given cause. Therefore, the point of their destructive action is to “put people on notice that there exists active insurrectionary resistance, right here in the belly of the beast”—an explanation that could ironically apply to a nonviolent campaign as well.

Another point of contention that should be noted is that SOAR and other anarchists like them do not view themselves as violent. As one masked protester told the Toronto Star newspaper: “This isn’t violence. This is vandalism against violent corporations. We did not hurt anybody. [The corporations] are the ones hurting people.”

Unfortunately, this rings as a rather naive, if not even disingenuous, statement. There are differing views on whether or not vandalism is a form of violence and while there’s no doubt it pales in comparison to the violence corporations engage in every day, it does scare people and furthermore leads to a string of unintended consequences.

In Toronto, it led to the passage of draconian laws that violate Canada’s charter of rights and freedoms. At least one family had their home mistakenly broken into by gun-brandishing police officers. Also, “non-lethal” weapons, such as tear gas, were used for the first time ever on the public citizenry of Toronto.

Anarchists engaged in vandalism may continue to dismiss the role they play in the perpetuation of violence, but they will do so at their own peril. There is no evidence of their tactics working toward any kind of positive change.

Looking back on the World Trade Organization protests in Seattle 10 years ago, we do not hear anyone applauding the work of those who smashed windows. If anything it’s taken 10 years to overcome those images and get people to recognize that Seattle was a largely nonviolent campaign that effectively shut down the WTO for years to come.

Perhaps the most encouraging result of the aftermath was that Seattle’s police chief not only apologized to the peaceful protesters but also came around to seeing their perspective and has become a critic of globalization. If there’s any chance of that happening again, it’s going to be through undisturbed nonviolent action.

None of this is to say, however, that the nonviolent protesters in Toronto are blameless for the general dismissal of their action. They bare responsibility for not figuring out a way to distinguish themselves from the anarchist vandals. Nearly every anti-globalization demonstration is hijacked by this group and nonviolent activists should have a plan for dealing with them by now.

Finally, G20 activists have done a poor job of making their demands known. The array of groups and issues present at G20 demonstrations confuses the public and rather than try to figure out how all the issues are connected, they just write everyone off as a bunch of misfits and societal castoffs.

The good news is that in the world of nonviolence, these are surmountable problems. Nonviolence isn’t the one tactic anarchists make it out to be. In his book Waging Nonviolent Struggle, Gene Sharp identified 198 methods of nonviolent action. If G20 activists can isolate the ones that aren’t working for them and employ new ones, perhaps the next demonstration will close the gap between the frustrated anarchists and the ignored peaceful protesters.