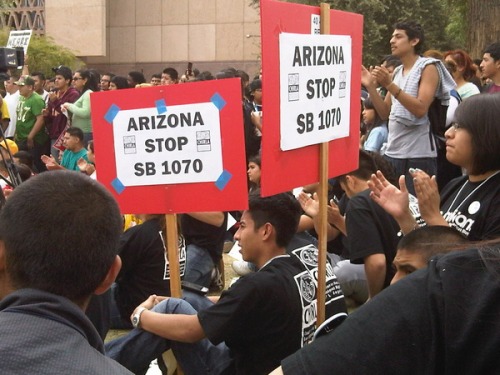 Since the recent passage of Arizona Senate Bill 1070, scheduled to go into effect on July 29, those of us working for social justice in the United States have a rare opportunity to register a particularly effective form of protest.  The inherently unjust nature of this legislation presents conscientious individuals with a real chance to go back to what many might say civil disobedience was originally intended to do: promote the repeal of an unjust law by openly and nonviolently breaking the law itself.

This is what has come to be known today as direct civil disobedience.  It is distinguished from indirect civil disobedience, where the law being broken is not itself the target of the protest.  Not many would argue, for instance, that a law prohibiting people from sitting in the middle of the street is unjust.  When used to draw attention to an issue of social importance, however, violating this law with a willingness to accept the consequences may be an effective tool.  Although the merit of such tactics can vary depending on any number of factors, to score a direct protest by violating an unjust law is very likely to be viewed as more legitimate.

The distinction is useful because in recent years we in the United States haven’t had to worry much about severely repressive, overtly dictatorial laws.  Not so very long ago, in certain parts of the country, violating an unjust law was as simple as ordering food at a lunch counter, sitting near the front on a city bus, or going swimming at a public beach.  More common in the US today we find people courting arrest by blocking entrances to buildings, occupying government offices, or chaining themselves to fences, seeking to address an injustice more or less unrelated to the law actually being transgressed.  Since these injustices don’t always allow for direct, public defiance, we try to create that tenuous link between issue and protest method as best we can.  But while indirect civil disobedience always beats inaction, from a strategic standpoint, if the opportunity is there, direct beats indirect every time.  And with this new Arizona law, the opportunity is definitely there.

Indeed, not since the end of the draft in 1973 has there been a law in the United States that seems to render itself so well to direct civil disobedience.  Arizona SB 1070 requires non-citizens to keep registration documents on them at all times, and forces police officers to inquire about immigration status during any kind of arrest or routine stop if they encounter “reasonable suspicion” that the person might be in the country illegally.  In addition, the new law gives police leeway to arrest someone solely on the basis of there being probable cause that they may be undocumented, at which point they’re to be turned over directly to Immigration and Customs Enforcement (ICE).

This basically boils down to the police in Arizona having new license to stop anyone looking remotely Hispanic – for no other reason than that they look remotely Hispanic – demand papers from them, and take them into custody if satisfactory documents are not immediately produced.  Predictably this has led some people, such as Roman Catholic Archbishop Roger Mahony, to draw parallels to the lives of those in Europe forced to live under the Nazi régime.  Additionally – and this concerns all of us – the new Arizona law makes it a crime to “transport or move”, or “conceal, harbor or shield” undocumented immigrants, reminding me more of something out of the Fugitive Slave Acts from this country’s dark past.  Against such blatantly unjust, potentially far-reaching legislation, at least we’re armed with a chance for everyone to participate in its direct disobedience, instead of just abandoning our undocumented brothers and sisters to their fate.

In a relatively short amount of time, Martin Luther King, Jr. became somewhat of an expert on unjust laws.  In a speech he delivered before the Fellowship of the Concerned in 1961, King defined an unjust law as “a code that the majority inflicts upon the minority, which that minority had no part in enacting or creating, because that minority had no right to vote in many instances.”  Although close to 50 years old, this definition holds up in modern-day Arizona quite well.  The undocumented minority, having virtually no recourse to its voice being heard, is at the mercy of the majority – in this case that of the Arizona Senate – 60 percent Republican, and 100 percent white.

King places upon his definition one condition: that the law the minority is compelled to obey is not binding upon the majority.  This indeed rings true again, as one would have a very hard time imagining members of Arizona’s white community consenting to being stopped because of their skin color, questioned by police, and immediately forced to prove their legal status under penalty of detention.  On the necessity for civil disobedience when faced with such a law, King writes in his Letter from Birmingham Jail that:

(A)t first glance it may seem rather paradoxical for us consciously to break laws.  One may well ask: “How can you advocate breaking some laws and obeying others?”  The answer lies in the fact that there are two types of laws: just and unjust.  I would be the first to advocate obeying just laws. One has not only a legal but a moral responsibility to obey just laws. Conversely, one has a moral responsibility to disobey unjust laws. I would agree with St. Augustine that “an unjust law is no law at all.”

While it’s difficult for me to speculate as to exactly how this unjust law should best be disobeyed, the inspiring example is already there of the five students and community organizers who staged a sit-in at Senator John McCain’s office in Tucson after the bill’s April signing.  Remarkably enough, three of the five were undocumented and knowingly subjected themselves to possible deportation, finally undergoing arrest, then detention by ICE, before thankfully being released the next day.

Nobody, of course, could ever expect anyone else to risk such drastic consequences, although the power and moral suasion of such a protest among the general public would be staggering.  This most extreme example of civil disobedience to the new Arizona law is only practicable by a small segment of the population – the ones with the very most at stake.  But direct civil disobedience in this case is not just for the undocumented, nor only for those of Hispanic descent; if we can put our heads together and strategize, I think we’ll find that Arizona SB 1070 gives all of us the opportunity to figure out a creative, nonviolent, and effective way to break the law, in hopes that someday soon we can see it taken off the books.

Calls to abolish ICE grow as encampments multiply across the country

Germans march in Munich against G7 talks and trade deal

How do you tell the kids that Grandma is in jail for resisting nuclear weapons?

A rare opportunity for direct civil disobedience in Arizona