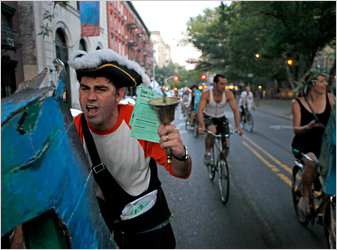 Time’s Up!, “NYC’s direct action environmental organization” (which also fought to save a Brooklyn bike lane earlier this year), is now organizing to protect New York’s community gardens, which may become vulnerable to development in September. The New York Times reports on how:

The bikes departed Tompkins Square, pedaled by men and women dressed in 21st-century thrift-store versions of 18th-century garb. There were tricorn hats, vests and, in a few cases, shirts with long, flowing sleeves. Many of the bicycles were decorated with cardboard cutouts in the shape of a horse’s head. One man rang a bell. Others shouted to passers-by on Avenue B, calling out, “The bulldozers are coming.”

The procession was modeled, of course, on Paul Revere’s nighttime ride to Lexington, Mass., in 1775. But the riders on Thursday night meant to warn people not about an invading military force, but about proposed rules by the city that would alter the status of hundreds of community gardens.

[…] They rode from garden to garden in the East Village to spread news of the rules, then ventured uptown to deliver a message to Mayor Michael R. Bloomberg.

One perhaps can’t help but wonder whether these activists might have gotten the Revolution-era motif from the Tea Party, a movement not exactly known for dedication to the environment. What is it—tribute or reclamation? Or neither?

Time’s Up! has more in store. The Times continues:

Some gardeners said the ride was the first in a series of events meant to sway opinion in favor of explicitly preserving the gardens. Members of a citywide gardening group are encouraging people to bring signs and banners on Aug. 10 to a public comment session for the new rules. Some gardeners said they would deliver fruit and vegetables from gardens to the mayor and members of the City Council on Monday.

The Time’s Up! website describes two upcoming actions, one of which is this morning:

Bicycle protesters have sometimes been accused of being overly aggressive and disruptive of traffic, but here the mood seems to have remained positive, declaring the good that these gardens do for the city. I experienced this at least twice today: eating lunch at a restaurant in my neighborhood in Brooklyn that serves garden-grown food and then, on a bike ride no less, discovering the large community garden at Floyd Bennett Field where an elderly immigrant couple happily showed my friend and me their day’s harvest of beautiful tomatoes.

Why are the Danes so happy? Because their economy makes sense

6 creative ways to make your point at the conventions