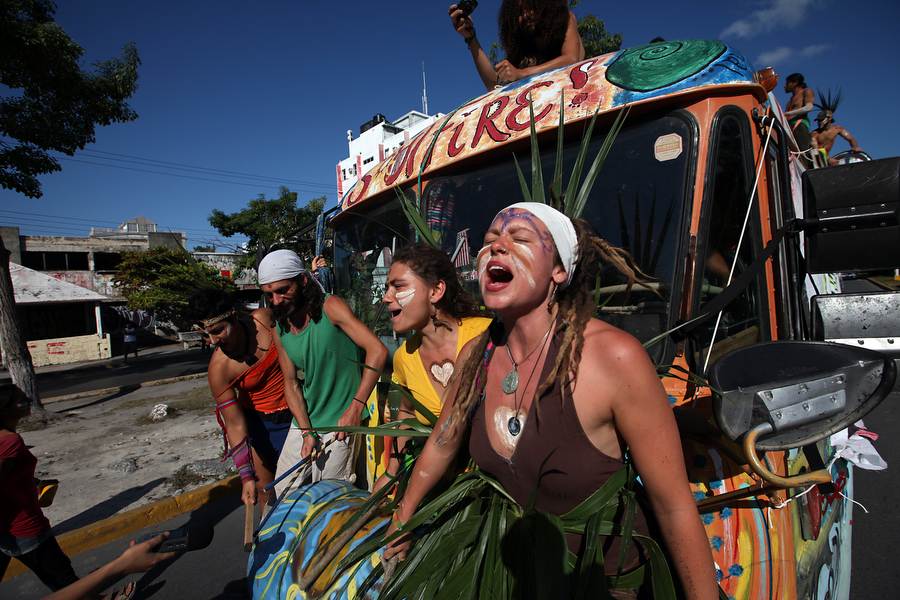 While delegates at the UN climate conference in Cancun were busy saving the 20-year climate negotiations from imminent collapse, climate activists set about reminding the moribund media of what’s at stake if politicians continue to drag their feet. As the Los Angeles Times wrote last week:

In Cancun, if the delegates negotiated behind closed doors, environmental groups made up for it by vying to stage the most creative “photo ops” to capture media attention. Mark Malijan, a freelance photographer whose trip to Cancun was sponsored by Earth Journalism Network, captured vivid images of a broad variety of protests. See his slide show above this post.

Among them was the demonstration of La Via Campesina, a social justice group that included Mayans from the Yucatan province around Cancun, and activists from both developing and industrial countries. About 1,000 protesters– men, women and children, many in colorful outfits–carried signs promoting indigenous rights and condemning efforts to sell carbon credits from forests. Music from a steel drum and chants of “Si, se puede!” (Yes, we can!) punctuated the march.

Malijan also captured a 350.org “media event”: Four young protesters from the Dominican Republic, Mexico, the Democratic Republic of Congo and the Philippines sat at a table plunked in the surf off Cancun, a symbol of the rising tides expected to swamp coastal communities if planet-heating emissions are not curbed.

And from a balcony of the Crown Paradise Hotel, an opulent beachside resort, he photographed the symbolic protest of Greenpeace and Tck Tck Tck, an alliance of climate action groups.  Volunteers dressed as negotiators in dark suits floundered in the sea, around a giant inflatable ring symbolizing  a “lifeline” they need to throw to the endangered planet. On the beach, others lay down on the sand in a pattern spelling out the question: “Hope?”

Back at Cancun Messe, a giant hangar with rooms for seminars and press conferences, a group of delegates from Tajikistan and Central Asia, sitting before a flaming red backdrop, offered a more tranquil tableau, as they presented data on glacial melt and water shortages.

In the same building, Malijan ran into a polar bear shaking hands with a skeptic. It was a British aristocrat, Lord Christopher Monckton of Brenchley, who has made a career out of casting doubt on global warming. Inside the polar bear outfit was Matt Vespa, a San Francisco-based attorney for the Center for Biological Diversity, an environmental group.

Behind the sprawling, chaotic movement to boycott Trump

A look at climate actions in Cancun