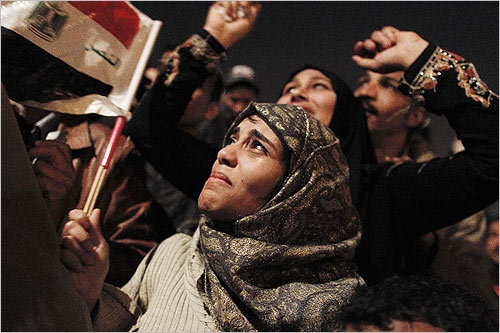 Virtually all analyses that I have encountered in the mainstream media on the Tunisian and Egyptian democracy uprisings have emphasized material causes: poverty, widespread unemployment, food prices, lack of political participation, corruption, denial of human rights, oppression, torture and so on. These may be grounds for deep grievances. But they do not explain the sweep of national nonviolent mobilizations across the Eastern bloc and into the Soviet Union, starting in 1980 with Poland. They do not explain the Israeli and Palestinian joint committees that worked together to develop new symbols starting in 1981, and which became the first harbinger for the 1987 Palestinian intifada. They do not explain the decade-long U.S. civil rights movement.

Indian resistance to colonial rule was strong throughout the 19th century; more than 100 peasant revolts were politically shallow and easily suppressed. Yet it was not deprivation or colonial exploitation that caused multiple, multi-decade independence struggles to unify virtually the entire Indian population in the early 20th century.

Tunisia and Egypt’s upheavals were years in the making, as are all national nonviolent revolutions that I’ve studied. Many tragic events had transpired, but had not set off a national movement. Not only does suffering not explain the emergence of a movement, what may trigger a mobilization in December or January may not have had any effect in months or years earlier.

All of these factors were present and operative in Tunisia and Egypt in 2010-2011, in varying degrees of intensity and pervasiveness.

I have not mentioned the charismatic leaders that are supposedly required of nonviolent movements, because I find little evidence of this phenomenon as a factor. More typically, movements thrust forward the leaders that exemplify their quest and raise up those who personify their emerging mobilization. Effective spokespersons must sometimes materialize rapidly, even if they must stay nameless or faceless in movements that are obliged to remain clandestine to survive.

I would rank all of these factors as more important than the exact nature of the underlying fundamental material grievances that so dominated the analysis by the North American and European news media.

We do not yet know the eventual outcomes in Tunisia and Egypt, although we do know that the more advance study, planning, and preparation the better. Poorly planned, improvisational mobilizations have historically led to coups d’état or merely opened the doors to a new set of thugs.

Analogies to Iran and Gaza are utterly misplaced. If you want analogies, look to the Eastern bloc. Educated middle classes of today’s societies can make judgments about ethics, principles, values, and basic rights based on a wider framework of analysis than those with little education. The artistic and literary activist scholars who addressed their work and communications to these middle classes in the Eastern bloc helped them to comprehend the corruption of the system, and hence played a major role. They needed receptive listeners and readers, but their work unraveled Eastern European communism. There, as in North Africa and on the Nile, movements grew from the broad numbers who came to see through the lies on which whole systems of patronage were based.

Egypt and Tunisia: The Untold Story