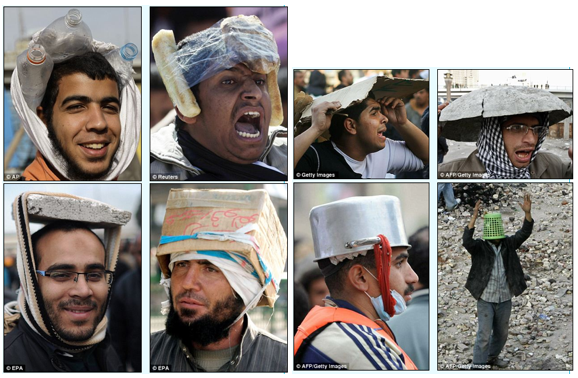 We’ve written a lot on this blog about the importance of appearance at protests and the potential negative consequences of wearing body armor—namely that it is more likely to inspire violence and draw sympathy away from the cause. But the pictures of makeshift helmets worn by Egyptian protesters that surfaced in a recent Daily Mail article have led me to consider a possible exception to the rule.

These protesters, wearing baskets, plastic bottles, and metal pots on their heads elicit feelings quite different than fear and intimidation. At first they appear comical, but upon further consideration they are a clear sign of desperation. Consider the difference between these photos of makeshift armor and this picture from the pamphlet distributed by activists last week called “How to Protest Intelligently”: 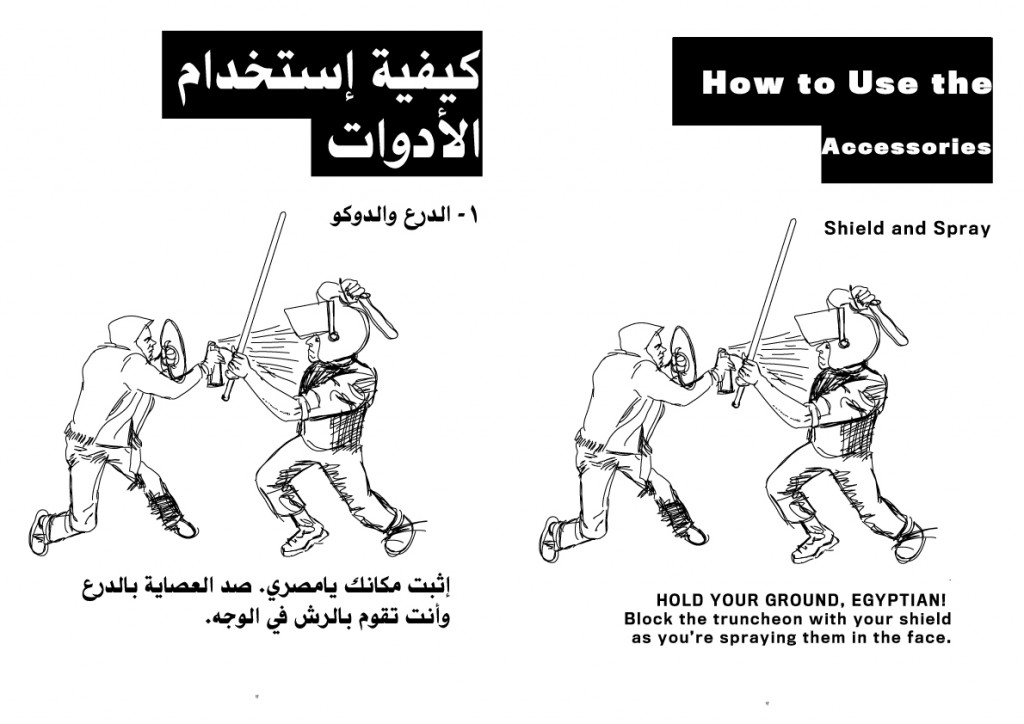 Had the protesters followed this model and come armed with shields and spray paint, the crackdown would likely be a lot worse. At the same time, however, body armor—no matter how pathetic and makeshift-looking—still takes something away from the desired effect of nonviolence. Wearing armor is a sign that you are playing by the state’s rules of engagement. But the moment you face a heavily-armed state without any defense, you’ve in effect changed the rules of the game. As military historian Basil Lidell Hart once noted in regards to his interviews with German generals after WWII, “other forms of resistance baffled them” because “they were experts in violence, and had been trained to deal with opponents who used that method.”

While that doesn’t mean you aren’t still risking your life when you resist nonviolently, it does mean that public perception is likely to your advantage. I think the Egyptian people have that sympathy, for the most part, despite not adhering to a strict code of nonviolence. But I wonder what the difference would be if the images we’ve seen so far, with all the chaos and rock-throwing, looked more like the images from the Civil Rights Movement or any of Gandhi’s campaigns in India, where people are calm, orderly and defiant in the face of oppression. Would Mubarak have any political capital or support left?

A win for the caring economy in Massachusetts