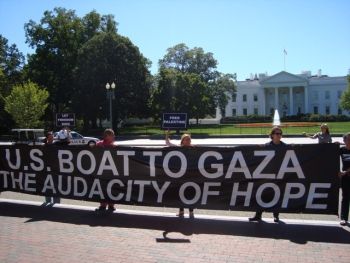 A US boat named The Audacity of Hope is scheduled to sail to Gaza next month along with a flotilla of 15 ships from Europe, Canada, India, South Africa, and the Middle East, carrying passengers from more than 22 nations. The US Boat to Gaza is part of a larger campaign to break the blockade of the Gaza Strip and draw attention to Israel’s inhumane blockade of the Palestinian coastal enclave. The organizers, supported by a large list of signatories, explained the reasoning behind the presence of a US boat in the upcoming flotilla as such:

The U.S. government is complicit through established policies that uncritically support Israel in its brutal attack on the Palestinian people and on those who attempt to intervene on their behalf. We in the United States must continue to step up and do our part. We must join with others from across the world to support an end to the collective punishment of 1.5 million Palestinians in Gaza.

The international movement to end the siege on Gaza reached a violent peak on May 31, 2010 when Israeli commandos intercepted the Gaza Freedom Flotilla, killing eight Turkish nationals and one Turkish-American. In the aftermath of Israel’s raid on the Freedom Flotilla, Israel mounted an aggressive PR campaign to derail the growing global awareness of the humanitarian crisis resulting from Israel’s blockade of Gaza.

The Israeli daily, Haaretz, reports that Israeli prime minister Benjamin Netanyahu has asked UN secretary general Ban Ki-Moon to stop the flotilla that is set to arrive in Gaza in May. In his statement to the UN, Netanyahu accused the impending flotilla, deemed the Freedom Fleet, of being comprised of radical Islamists “whose aim is to create a provocation and bring about a conflagration.”

The Israeli government campaign to silence dissent and curb criticism of Israeli governmental and military policy, evidenced by Netanyahu’s desperate plea to Ki-Moon, has accelerated with the creation of a military intelligence research division tasked with monitoring left-wing groups and so called “deligitimizers.” The new unit will reportedly work closely with Israeli government ministries and has already been in discussion with the Prime Minister’s office regarding the Freedom Fleet’s upcoming journey to Gaza.

In addition to monitoring the actions of the Free Gaza Movement—an organization involved in the flotilla planning—and similar organizations that aim to highlight the blockade on Gaza, the military intelligence unit is also tasked with monitoring Western groups who support boycotts, divestments, and sanctions against Israel (BDS).

Supporters of the BDS movement will not only find themselves under close Israeli intelligence surveillance, but may also be faced with legal consequences. The Israeli Knesset passed the first reading of a “boycott law” that would criminalize any calls for academic, cultural, or economic boycotts against Israel. According to the law, courts could levy fines of up to 30,000NIS (approximately $8,500) against Israelis calling for boycotts whereas foreign nationals who violate the law could be denied entrance to Israel for 10 years or more. The law poses a clear threat to Palestinian citizens of Israel, as well as Jewish citizens of Israel and foreign nationals, who support the levying of boycotts, divesment, and sanctions against Israel. The “boycott law”, which is supported by 32 members of the Knesset alongside 12 members who were in opposition, shows the Israeli state’s increasing fear of the BDS movement.

Israel’s dismissal of all criticism as “deligitimization”, along with the impending criminalization of boycotting Israel, has not stopped Israeli, Palestinian, and international organizations who continue to work for an end to Israel’s occupation of the West Bank and siege of the Gaza Strip through the nonviolent, coercive pressure of BDS.

The blockade is not just a blockade on goods, but also on human contact and communication. Your personal message will reach people who have literally been imprisoned by the Israeli siege and blockade.  Your letters will build solidarity and make a human connection. They will convey our dedication to ending the Israeli occupation, and the liberation of Palestine guided by international law, justice and human rights.

Already mothers, farmers, teachers, students, cab drivers and artists are writing. Whether it’s a letter from a U.S. mother to a mother in Gaza, a child in the U.S. to a child in Gaza, or letters from students, teachers, business people, religious leaders to their counterparts in Gaza, the siege cannot withstand the power of our words to break through.

For more information on how the letter writing campaign and how to otherwise support The Audacity of Hope‘s journey visit their website.

The work to shut down Guantánamo never ends

US activists to launch boat to Gaza