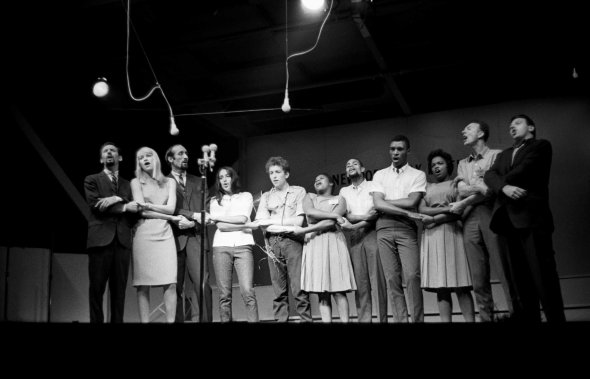 How should music rank among the ever-growing list of time-tested nonviolent methods such as boycotts, marches, strikes, sit-ins, and vigils?

Anthony Shadid of the New York Times reports that a song, “Come on Bashar, Leave,” is spreading across Syria, boldly calling on President Bashar al-Assad to step down. (Bryan Farrell also wrote about it at Waging Nonviolence yesterday.) The article suggests that a young cement layer who chanted it in demonstrations was pulled from the Orontes River this month, his throat having been cut, and, according to residents of the city of Hama, his vocal chords torn out. Hama is where, in 1982, then-president Hafez al-Assad, father of the current president named in the song, gave orders to the army to massacre more than 10,000 in putting down an Islamist upheaval. Today, boys aged six years and older vocalize their own rendition of the original warbler’s song instead. As the song has sped across Syria, demonstrators have adopted it for themselves.

During the U.S. civil rights movement, “freedom songs” raised courage, stated the goals, declared commitment, united separated communities, and sometimes took melodic aim at notorious police chiefs. As a contemporary expression of spirituals, freedom songs derived from the black choral tradition that developed from the African and American experiences, matured in the fires of southern slavery. They addressed frustrations, forged bonds of personal loyalty, assuaged fear and dread, and fortified a people under stress. A strong tradition of composing during performance, in response to need, meant that new phrases would be added or a stanza changed to take up a specific issue, such as deciding whether to go to jail the next day. Song leading became an organizing tool. The civil rights struggle was profoundly rich in song, due to the significance of black congregational singing, nourished as it was by faith and resistance. The movement’s signature anthem, “We Shall Overcome,” has since become a universal expression of civil resistance movements across the world.

Later, music held a central role in the nonviolent revolutions of the Eastern bloc. On August 23, 1989, hundreds of thousands of Estonians, Latvians, and Lithuanians linked hands in a human chain across 400 miles, “manually” connecting the capital cities of the three Baltic republics. As many as 2 million participants of all ages demanded the right to restore their independent statehood, as they sang folk and nationalist songs. They called their action the Baltic Way. Estonia’s struggle that brought independence is specifically known as the Singing Revolution.

During Ukraine’s quest for fair elections in 2004–2005, songs sung by rock groups contributed to the Orange Revolution movement. In 17 days in autumn 2004, massive rallies gained staying power from the efforts of musicians who performed around the clock. As approximately 1 million disciplined Ukrainian demonstrators camped out in Kiev’s Independence Square to protest rigged election results, their singing and music expressed their purpose. Everyone could participate, and music helped to assure the security personnel that the throng would be stationary. Music ranged from Okean Elzy, the most popular group in Ukraine, to the rock band Grandzioly (Green Jolly), which recorded the official lyrics of the Orange Revolution, “We Are Many, We Cannot Be Defeated.” In Ukraine alone, the song had 1.5 million downloads.

Why is music and song important in civil resistance? Several reasons leap to mind. One of the most fundamental requirements for a nonviolent mobilization to coalesce is the need to communicate clearly the nature of the specific grievance. The wrong that has brought people to shed passivity and actively wage the conflict without violence must be clearly grasped, if success is to be achieved. Songs can help in enlisting new recruits. When a group or society has decided to take history into their own hands and wants to act effectively to lift oppression, they must be able to put their point across intelligibly and compellingly. At the most basic level, the desired change can come about more quickly if the target group fully comprehends the basic injustice that has brought an organized challenge to its legitimacy and power. Songs can sometimes transmit the cause of distress more penetratingly than pickets, news releases, or press conferences—which is why the Syrian authorities have reacted to something as intangible as a song.

Music and culture, it must be remembered, are shared by police, security services, and the army, and therefore may help to turn the loyalties of state servants away from repugnant policies or regimes. Lyrics put to a familiar traditional melody can remind the populace and those in the security apparatus that they are one, and that they will together share the benefits of the change being sought.

As in the civil rights movement, singing the right song at the fitting moment can involve heart, mind, body, soul—one’s entire being—in making the decision to face fear, stand unflinching in attacking the political power of the adversary, or confronting likely grave retaliation. “This May Be the Last Time We See Each Other,” for instance, was a freedom song that we sang in the civil rights movement only when we were afraid that someone would be killed.

Oranges, olives and palms, oh my! — protest for Passover and Holy Week

The Power of Song, from Selma to Syria