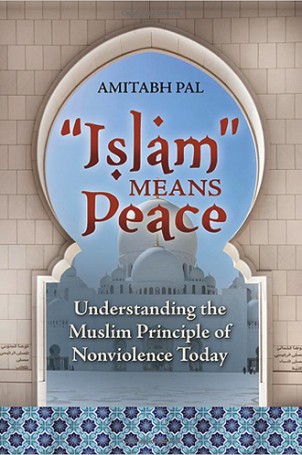 After the Arab Spring, few would argue — as many did until very recently — that nonviolence and Islam are incompatible or even contradictory. At the same time, however, few still have any knowledge of the rich history of nonviolence in the Muslim world, which long predates the uprisings in Tunisia and Egypt.

That is why “Islam” Means Peace: Understanding the Muslim Principle of Nonviolence Today, the new book by Amitabh Pal, the managing editor of the Progressive, is so important. In addition to writing wonderful chapters on somewhat more well-known figures in the nonviolence world like Khan Abdul Ghaffar Khan, Pal tells the story of many obscure Muslim peacemakers who deserve far more attention — such as Abul Kalam Azad, who worked alongside Gandhi in India’s independence struggle, and Ibrahim Rugova, who led the Kosovar Albanians’ nonviolent movement against Milosevic.

For anyone not well-versed in Islam, Pal also provides a great primer on the Qur’an, the real meaning of jihad and how Islam actually spread around the world, effectively rebuting many of the most common myths about the religion. I recently interviewed Pal for Religion Dispatches about this hidden history and how the nonviolent movements in the Middle East are shaking up both the region and the way that the West perceives Islam. Here is an excerpt:

What role have women played in nonviolent movements in Muslim countries? How might their greater participation in these actions and campaigns change the gender dynamics in these countries?

I can answer this historically. In the case of Ghaffar Khan’s movement there was the participation of a surprising number of women, given how conservative — and you can even argue misogynist — Pashtun society had been traditionally. They allowed women to participate because he said so and his honor and stature was such that they couldn’t resist. Back in the 1930s and 1940s, women used to lead their marches! This is just incredible. What power and influence he must have had to convince them to allow that to happen! Did that lead to a large scale change in the way that women were perceived in Pashtun society? No, probably not. Did that perhaps lead to a small, tiny change? Hopefully yes.

If we leap forward to what’s happening in Egypt and Tunisia, women have participated in very large numbers. I think it’s been a very positive development and I think they will form the bulwark against a regression on women’s rights and ensure that the Muslim Brotherhood and their ilk will not be able to seize power and push women to the back room. They have been empowered and I don’t think they’re going to give up their rights, at least in these two countries, very easily. That’s positive and hopeful. Historically, Tunisia has been one of the most progressive in the Arab world in terms of women’s rights, and I think women there are determined to keep it that way.

In one part of the interview that was cut from the final version, Pal gives a very powerful response to a question about the difficulties that many of the ongoing movements in the region still face that is worth remembering.

What would you say to critics who now point to Libya or the recalcitrance of regimes in Syria, Yemen and Bahrain to argue that nonviolence can’t succeed against more ruthless regimes?

I would urge people to be patient. We live in an age of short attention spans where everything seems to happen at hyper speed. It took Gandhi three plus decades. Let’s not forget. He came to India from South Africa during World World I. It took Martin Luther King a decade or so, from Birmingham to the civil rights bills. To take a European example, Solidarity in Poland seemed to be vanquished in the mid-80s and it came back in the late 80s after a decade of struggle and toil. So it takes time. It has barely been six or eight months for heaven’s sake. People are so impatient!

How Brexit is an opportunity for a more just Britain

Amitabh Pal on Islam and nonviolence