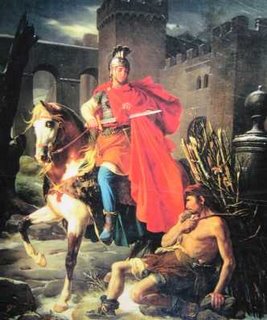 One of the key components of building a more nonviolent world is unearthing our forgotten, suppressed, or distorted history of nonviolence.

Nathan Schneider offered a pointed example last week on this site. His story reports how the US Air Force was using religious motifs—including what it called Christ “the mighty warrior” who believed war was “just”—to answer the question “Can a person of faith fight in a war?” Not surprisingly, it responded in the affirmative.

This is nothing new. Since the legalization of Christianity by Emperor Constantine in 315 C.E. the thoroughgoing nonviolence of Jesus has been misshapen out of all recognition to better fit the demands of empire.

While this has been perennially the fate of Jesus, it has also been true of those who have come after him. Followers of Christ who have committed themselves to living a radically nonviolent life have often, ironically, found their life stories twisted to support war and violence.

A case in point was alluded to in Nathan Schneider’s article. The story was accompanied by the title page of the US Air Force document in question, which depicts a Roman soldier cutting his cloak in half to clothe a naked beggar. This is Saint Martin of Tours, who served in the Roman Army in the fourth century C.E. and throughout history has been deemed the patron saint of soldiers. For fifteen centuries, St. Martin has been the poster boy for the just war theory in which compassionate Christian teaching is compatible with military service.

This reading, however, is a striking falsification of Saint Martin’s story.

The saint’s biography, written just a few years after his death by Sulpitius Severus, relates how Martin resisted, rather than embraced, military service.

Sons of military officers were required to enter the Roman army. Wanting instead to become a Christian hermit, Martin was turned in by his father “who looked with an evil eye on his blessed actions” and was then “seized and put in chains… and compelled to take the military oath.” Rather than being a model soldier, Martin was forced against his will to join the Roman army.

Severus then recounts the story of Saint Martin’s interaction with the naked poor man, who is later revealed in a dream to be Christ himself. While this is as far as the traditional reading goes – the appearance of Jesus confirming the rightness and even holiness of Christian soldiering – Severus stresses that Martin’s encounter with Jesus was more crisis than confirmatory. This experience led him eventually to declare on the eve of battle: “I am the soldier of Christ: it is not lawful for me to fight.” His commander is furious at this news. As Severus puts it:

Then truly the tyrant stormed on hearing such words, declaring that, from fear of the battle, which was to take place on the morrow, and not from any religious feeling, Martin withdrew from the service. But Martin, full of courage, yea all the more resolute from the danger that had been set before him, exclaims, “If this conduct of mine is ascribed to cowardice, and not to faith, I will take my stand unarmed before the line of battle tomorrow, and in the name of the Lord Jesus, protected by the sign of the cross, and not by shield or helmet, I will safely penetrate the ranks of the enemy.”

Though his commanding officer is convinced that Martin is a coward, he is baffled by his offer to stand unarmed at the front of the battle line. He decides to imprison him instead. And then the unexpected happens: “The following day the enemy sent ambassadors to treat about peace and surrendered both themselves and all their possessions.”

In these circumstances who can doubt that this victory was due to the saintly man? It was granted him that he should not be sent unarmed to the fight. And although the good Lord could have preserved his own soldier, even amid the swords and darts of the enemy, yet that his blessed eyes might not be pained by witnessing the death of others, he removed all necessity for fighting. For Christ did not require to secure any other victory in behalf of his own soldier, than that, the enemy being subdued without bloodshed, no one should suffer death.

Years ago I attended Saint Martin’s High School. In my four years there, I often heard the story about the saint’s encounter with the beggar: a salutatory example of charity. In my years there, however, I never heard the story of Saint Martin’s act of nonviolent resistance. In our age of permanent war, it is time to rediscover such acts of fearless nonviolent action. Our history is studded with this nonviolent legacy. We need only open our eyes to see it.

The Patron Saint of Conscientious Objection