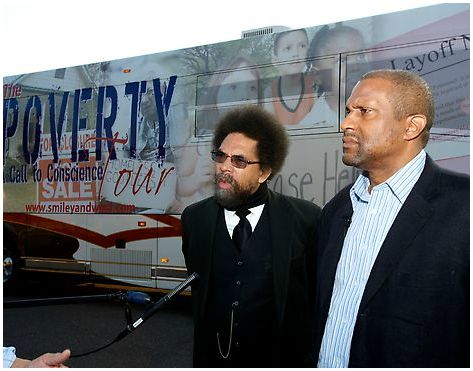 Broadcaster Tavis Smiley and Princeton professor Cornel West just wrapped up their 18-city “Poverty Tour”. The aim of the trip that traversed through Wisconsin, Detroit, Washington DC, and the Deep South was to “highlight the plight of the poor people of all races, colors, and creeds so they will not be forgotten, ignored, or rendered invisible.” Although the trip has been met with a fair amount of criticism, the issue of poverty’s invisibility in American media and politics is unmistakable. The community organizations working tirelessly to help America’s poor deserve a great deal more attention than what is being given.

The main attack against the Poverty Tour is Smiley and West’s criticism of Obama’s weak efforts to tackle poverty. For me though, what I would have liked to see more is the collection of stories and experiences from the people West and Smiley met along their trip. The act of collective storytelling in and of itself can be an act of resistance.

American media is mostly fatigued of poverty and recession coverage, which is one reason that Republicans have been able to pass laws that damage needed social programs. Even with the increasing racial diversity in America, there is minimal neighborhood integration for African Americans. Hispanics and Asians remain as segregated now as twenty years ago.  Americans do not know each other, and especially middle to high income white communities have a dearth of comprehension of what life is like for those in low-income communities.

I have been abroad for the past two and a half years. When I left the US, the economic collapse was only beginning. Coming back to America was a shock in and of itself. I traveled around to different areas; from rural areas, to Native American reservations, and large cities before settling back in inner city DC. What strongly hit me is how the diversity of struggles and situations is not even closely represented in media discussions. The stories being told are a tiny fraction of what life is actually like for many people. Facts and statistics about poverty in America—unemployment numbers and so forth—may sometimes be reported, however, the human face of inequality is more hushed. A new study by PEW Research Center shows how white Americans now have on average 20 times the net worth of African Americans and 18 times that of Latinos. These figures are astounding, and in some ways incomprehensible. Statistics are important, but the faces of the inequality, and the humanization are what are often forgotten.

Media might report on a single family or community that has been affected, but what West and Smiley’s tour wanted to capture was the swath of stories and experiences that are common for so much of America. While West and Smiley themselves were able to appear on a fair number of mainstream media outlets to discuss the issues, what I appreciated the most (and even wanted more of) was videos and stories of the people they talked with. You can see some videos on their YouTube channel here.

When asked why policymakers and the media don’t talk about the poor Smiley said:

…because they are a throwaway population. They’re disposable. Too many poor people are being rendered more and more invisible in this country every single day. I’ve said consistently it’s the telling of truth that allows suffering to speak.

West and Smiley wanted to find a creative way to get attention on the issue of poverty, and in that regards they are right – creativity, innovation, and organization is needed. If mainstream media does not want to report on issues of inequality in America, then people have to find new methods to get stories heard.

One of the organization’s West and Smiley met with was the Take Back the Land initiative that fights for housing rights in America. It’s a small and growing movement that is not just organizing people, but also using a variety of media such as videos, photos, and print to get their stories heard. There is still a digital divide in America, with whites having more access to internet in their homes, nevertheless internet and social media still has potential to bring more humanization to the issue of inequality in America. There definitely needs to be more creative measures to get stories out there.

Where are the stories of poverty in America?