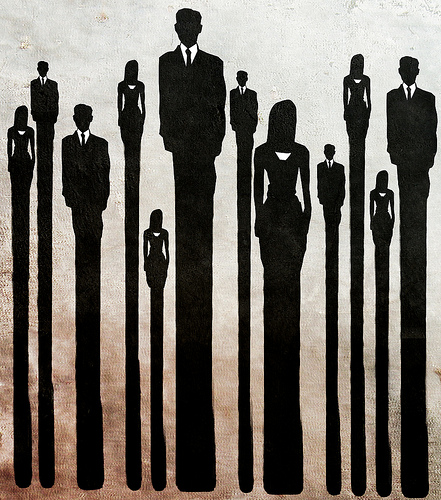 When is a Person not a Person?

Psychologists for Social Responsibility (PSR) recently answered this absurd question with the obvious and embarrassing answer: when it’s a corporation. According to PSR’s statement, in case anyone is confused, a human being:

is a complex organism with capacities for joy and pain, reflection, and the compassionate appreciation of others. Mature persons are expected to display reasoned judgment, and are personally responsible for their own actions (our emphasis).  Human beings live, breath, think, experience emotions, and internalize values such as empathy and caring for others. Like all sentient beings, they suffer, and die.

Corporations possess none of these functions, which make being human sacred, valuable and worthy of dignity. As the Occupy movements grow in remarkably inspiring ways, they have a unique opportunity to raise the human image from the slander and propaganda of the corporate media—where our capacity for consumption defines us and our desire for wealth drives us—to a more promising, and far more accurate conception of what makes us truly human: our capacity for nonviolence, motivated by our most precious desire for freedom. As Gandhi put it, “Non-violence is the law of the humans…”

It is clear in these movements that we are not fighting against a dictator who has been in power for longer than his share of time; we are fighting a new form of colonialism. It is time to take Gandhi more seriously than ever, as he led a campaign against colonialism for more than 30 years before laying down his life for the movement that we are now called on to continue bravely. Overcoming the juggernaut of corporate personhood through our highest ideals and desires is by no means a painless and rapid process. By its very nature, nevertheless, it is undoubtedly the most rewarding course that we can take. The benefits of what we receive in the process will certainly outweigh any short term sacrifices we may be required to make, even if that means our very bodies.

In order to do it we may have to be prepared to sacrifice everything, but never our humanity—or that of anyone. Resorting to violence would inevitably break the spirit of the movement, and our spirit is what we have in our favor—indeed, it is the whole issue. Violence is inhumanity itself. The admirable nonviolence that has characterized the actions of the protestors so far will have to be maintained as the movement morphs and grows and we find ourselves in situations where how to maintain it is not as obvious. But maintain it we must, since to use violence in the cause of humanity—and nothing less is really at issue here—would destroy the very thing we are fighting for.

Man’s inhumanity to man is as old as humanity itself. How we created a system to perpetuate this ultimate form of inhumanity, declaring that abstract entities are ‘persons,’ is not as obvious. Perhaps it was a cracked system from the beginning; perhaps it was the genocide we raised in the name of personal economic gain, or slavery, or war. Did anyone else notice the cruel irony when we dropped bombs on the “targets” over Japan, that were named “Fat Boy,” and “Little Man”? When Dr. King said that we have “guided missiles and misguided men” was he not referring to the horror where cities consisting of human beings became dehumanized while the machines built to kill them were given human names? Yet he believed that we could overcome that steady violence of dehumanization to guide us toward “beloved community,” not the cemetery of vengeance and destruction. A human being—any human being—must be held worthy of redemption from even our most grievous misdeeds, not because we have faith in a celestial father figure who rewards the just and punishes the unjust, but because we have faith in people.

There are at least two projects, to our knowledge, that seek to recall the giveaway of our precious humanity to abstract corporations through Constitutional amendment: Move to Amend and the Environmental and Social Rights Amendment, shepherded by Rabbi Michael Lerner and the Network of Spiritual Progressives. Let them be the constitutional ‘arm’ of the movement. And it would be well for all of us to draw attention to a basic fact, that corporations, as we know them, are by their very definition what PSR calls “a misleading and highly dangerous fiction” when they pretend to sequester human beings from their “personal responsibility for their own actions.”  Even “B-“ style corporations that dethrone the profit motive and observe the “triple bottom line” of person, profit, and planet” do not always avoid this dangerous fiction.

What began in imitation of a wave of political freedom struggles in the Middle East, some nonviolent and some not, has become a critical struggle for the dignity of humanity itself. And for that, nonviolence is the only option.

Corporations are not people: We hold these truths to be self-evident…