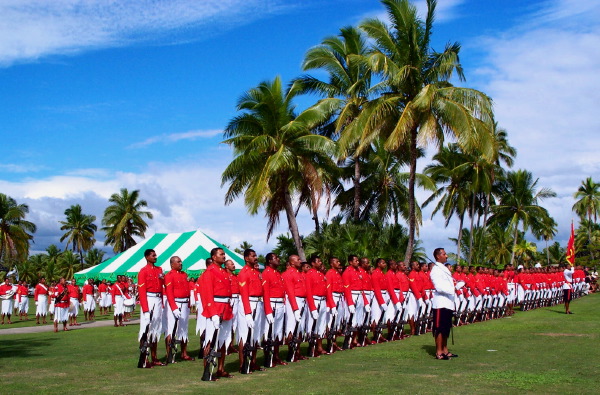 When Fiji’s brutally repressive military tried to detain an 80-year-old reverend with the Methodist Church this summer due to his involvement with politics, it caused quite a stir — not only because of his age or his former position as the military’s head chaplain, but also because he refused to let the soldiers take him to the barracks. “I told them, the only way to take me to camp now is bundle up my legs, tied up, and my hands, I will not go with you,” was how he described the incident to New Zealand press. “That is the only way, you carry me to the camp or you bring your gun and shoot me and you carry my dead body to the camp to show to the commander,” he said.

This kind of dissension from a former military official is not typical of the one group of Fijians that actually receives special treatment. Fiji’s strongman Commodore Voreqe (Frank) Bainimarama goes out of his way not to antagonize the military, which has intentionally trained more soldiers than it could handle in order to supply thousands of them to the British Army, American mercenary companies, and the U.N.’s peacekeeping operations in places like Iraq, Sinai, Lebanon, Sudan, and Somalia.

Lieutenant Colonel Ratu Tevita Mara — profiled in part one of this series as Fiji’s highest-ranking defector — has asked for the use of Fijian soldiers overseas to be stopped until democracy is restored, since he sees the practice as helping to keep Bainimarama in the military’s good graces. “He certainly rewards the military by sending them on peacekeeping duties overseas, and yes of course they get extra allowance, extra money for that,” Mara told me in a recent interview.

Bloomberg News noted in 2007 that Fiji had “positioned itself as a discount-soldier surplus store,” and quoted Bainimarama’s “private-army sales liaison” as saying that “we made a conscious decision to create an army bigger than we need to generate foreign currency.” Private contractors who’ve hired Fijian soldiers for work in Iraq and Afghanistan over the past few years include Blackwater/Xe, DynCorp, Triple Canopy, ArmorGroup, and Global Strategies Group, which even hired a full battalion of Fijian soldiers to secure the distribution of new Iraqi currency in 2003.

A few years ago, Iraq became the biggest source of remittances flowing back to the island nation, with the mercenary companies paying an extra fee to the junta for taking its soldiers. Now, as tens of thousands of U.S. troops prepare to pull out of Iraq by the end of the year, Fiji is being asked to send more of its own soldiers to help fill the vacuum: in front of the U.N. General Assembly in late September, Bainimarama boasted that “with the planned withdrawal of the U.S. Forces from Iraq this year, the United Nations saw fit to increase the size of its Guard Unit,” for which “Fiji was selected to provide the extra personnel.”

Mara told me that “what I’ve been pointing out to the other countries is that you have to undermine the military. That’s the only institution that Bainimarama has in Fiji that supports him. And if the military continues to support him, then the longer he stays in. You certainly can undermine the military support for Bainimarama by threatening to withdraw Fijian soldiers from peacekeeping operations. That will certainly have an effect.” Fijians started an online petition “to stop the deployment of abusive Fijian troops on peacekeeping missions overseas.” 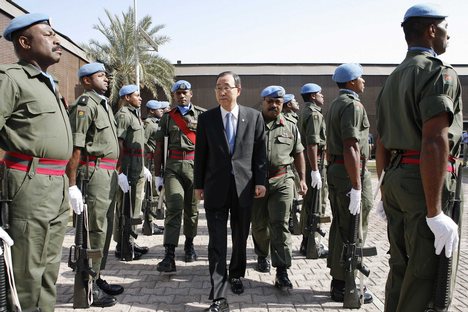 Secretary-General Ban Ki-moon tried to defend the U.N.’s continued use of Fijian soldiers at the Pacific Islands Forum in early September, where he said that “at the time of renewing this contract for Fijian soldiers in Iraq there was no other alternatives.” Ki-moon claimed that somehow the U.N. is privy to the internal workings of the junta enough to know who’s behind all of the abuse: “Whoever is known to have violated any human rights, we have not deployed,” he assured.

Mara dismissed this defense, and told me that “those participating in Iraq are regular force soldiers who have been in the army before and after 2006, so how can Ban Ki-moon verify they didn’t participate in the coup or its actions after? Totally impossible.” He said that “it’s a fact that soldiers involved [in the junta’s abuses] have been on U.N. missions since the coup in 2006 and continue to do so. There is no way the U.N. can verify the soldiers involved.”

Still, despite the financial incentives offered to the military, Mara said that “I know for a fact that the military is divided in their loyalty to Bainimarama. Even I was accused of plotting a coup against him while I was still in the military. He himself asked me that question, if I was planning a coup against him. And I said that’s totally incorrect. Why would I be wanting to plot a coup against you? I’ve mentioned that regularly — that I don’t believe another military coup will solve things in Fiji. In fact, it will only make things worse. But you can’t rule that out. You can’t discount people taking things into their own hands.”

Despite his years of military training, Mara made clear, “I’ve always advocated a nonviolent approach and a nonviolent end to what’s happening in Fiji. We can certainly influence the military. The majority of the military would like a return to democratic governance. The majority would like a return to normalcy in their daily lives, to live peacefully with each other, talk peacefully without being overlooked all the time. They certainly know that the country now views them as a force used by Bainimarama to oppress them. There are certainly a lot of hard feelings toward them, but in Fiji we’re all related to each other. The barrier is easily broken down by talking to each other.” 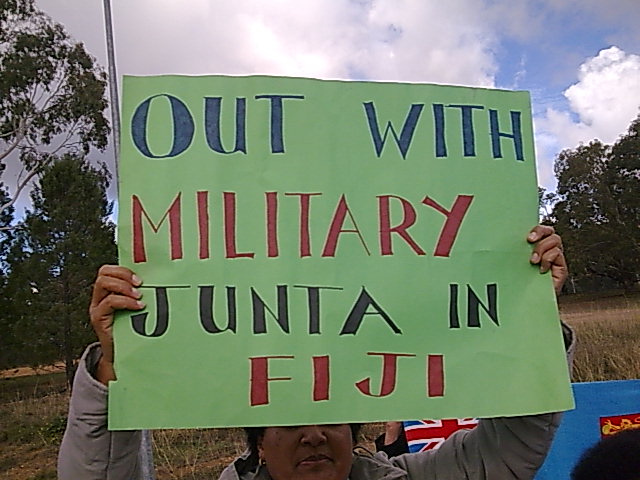 The U.S. Embassy in Fiji has likewise noted that regime change will have to be brought about by Fijians themselves: in a 2008 Wikileaks cable, the embassy wrote that “it is very difficult to envision a circumstance in which the United States would preemptively ‘intervene’ militarily,” but noted that “it is conceivable that foreign governments might have to ‘intervene’ to protect foreign citizens if an attempt to remove Bainimarama and his group triggers civil war.”

Before it comes to military action, however, Mara believes that Americans and other internationals can help to weaken the junta by boycotting not only Fijian mercenaries, but also tourism, global brands such as Fiji Water that fund and employ soldiers, and other key lifelines providing millions in cash to the regime. These leverage points — discussed in part three of this series — are those that connect Fiji to the rest of the world, through which the junta makes those of us who pay into them complicit in its exploitation and abuse of the Fijian people.

James Lawson Award helps to build the legacy of activism