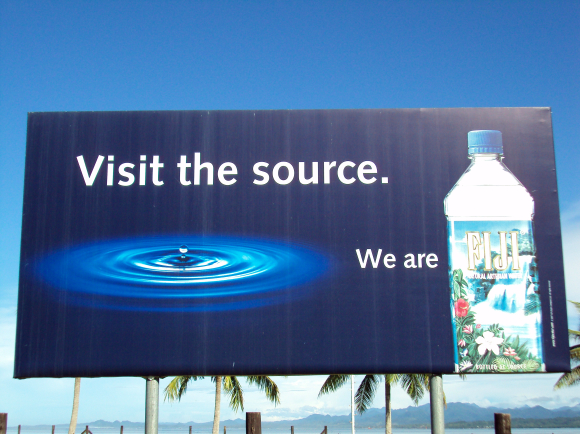 Fiji may seem like a distant and exotic land known primarily to Americans for its pristine beaches and ubiquitous Fiji Water bottles. “Brand Fiji” is the junta’s name for its multimillion dollar campaign to market Fiji as little more than a land of crystalline perfection. Lieutenant Colonel Ratu Tevita Mara — profiled in parts one and two of this series as Fiji’s highest-ranking defector — believes the outside world should consider targeting Brand Fiji’s most visible lifelines, such as tourism and water, that continue to provide the bulk of the cash that the regime is burning through.

“Tourists just keep feeding the regime,” Mara was widely quoted as warning Australians after his escape in May. Throughout the five years of dictatorship, Fiji has managed to retain its global reputation as a paradise — an American tourism industry survey this year found that Fiji was still the third most popular honeymoon destination in the world (behind Hawaii and French Polynesia), and the reality TV show The Bachelorette was even set there this summer. “If that is a way that the illegal junta can be brought to its knees, for tourists to be stopped from going to Fiji so the illegal junta doesn’t get the money that it’s illegally getting from tourists, then we should pursue that. Obviously it will mean hardship for us if it means hotels are closing down, but currently people are facing severe hardship,” Mara told me.

When I asked Mara what he would tell Fiji Water drinkers who may know Fiji only as the paradise it’s portrayed to be by the bottle, Mara said that “people in the States who drink Fiji Water should be aware that every bottle that they buy pours more money into the coffers of the illegal military junta.” He called Fiji Water, along with tourism, “revenue streams that are keeping the current military junta afloat. If they are avenues and ways that we should look at to try to bring down the military junta, to force it to go to democratic elections as quickly as possible, we should look at all means that keep it afloat. That includes tourism as well as Fiji Water.” (Fiji Water has described the post-coup turbulence in one of its newsletters as “an unfortunate crime wave as a result of political instability and building tensions,” in explaining why the company has “been making more of an effort to support our local police.”)

On Fiji Water’s hiring of the junta-run security operation, Homelink, to protect its facilities across the island, Mara noted that “Homelink is a security company that’s run by the military. Serving military officers serve on the board. It employs reserve and territorial force soldiers. So one would question the link there.” He adds that “the original concept was to maintain a vigilant security company within Fiji, but also to employ reserve soldiers. I doubt that there’s been a public audit that’s been done. Those are all questions that should be asked.”

Fiji’s other prized natural resource is mahogany, which the country grew into the largest mature plantation in the world. A power grab around this mahogany wealth was behind Fiji’s 2000 coup, while today a joint venture of foreign timber companies operates one of the world’s biggest mahogany factories off of the island. “Fiji Pure Mahogany” is the trademark name for Fiji’s value-added mahogany products, such as those turned into guitar parts and yacht components.

One of the biggest customers and currently most awkward suitors for this wood wealth has been Gibson Guitar, the rock superstar brand now embraced by the Tea Party and conservative figures such as Michelle Malkin after US Fish and Wildlife Service agents raided its factory in an ongoing dispute over the company’s imported wood. Gibson Guitar spent months courting the Fijian junta over a potential deal to become the exclusive buyer of Fiji’s mahogany for its high end guitars — reportedly giving Prime Minister Commodore Voreqe (Frank) Bainimarama a $5000 sample last year — but then abruptly cancelled a press conference that was supposed to announce the deal in late September.

Gibson’s CEO explained the delay in a statement: “No absolute commitment will be made until we conduct an extensive review of the situation. The Prime Minister has expressed his desire to have Gibson make a long term commitment to this emerging industry on the island nation. We are very hopeful.” 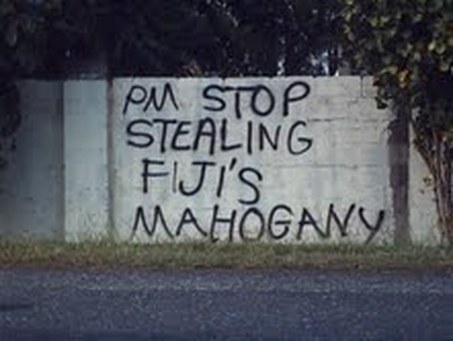 Whether the rumblings of discontent now coming out of Fiji, perhaps combined with international pressure, can coalesce into a movement coherent enough to force a return to democracy remains an open question. Any pressure western democracies can put on the junta is at risk of being eclipsed by China, which has started to lavish military and financial aid on a country facing increasing poverty and social stagnation. And then there is the unpredictability of Bainimarama — “a psychiatrist would have a field day with Bainimarama,” as the U.S. Ambassador to Fiji wrote in a 2006 cable recently released by Wikileaks. The Commodore has “lost all sense of reality,” Mara said. “At the moment it’s for his own survival. He knows that in the end he will face prosecution. As soon as you bring an elected government back in, he will be charged and prosecuted for what he’s done.”

As complicit as he was during the past five years of dictatorship — the U.S. Embassy refers to him as one of the “senior officers most visibly involved in post-coup human-rights violations” in Wikileaks cables, which also cite human rights activists who named him as being present for or aware of detainee abuse at military barracks — Mara now hopes that his willingness to return to Fiji and stand trial once democracy is restored will inspire other military officers to follow suit, and to start the truth and reconciliation process. “I apologize to the people of Fiji for my part in 2006,” he told Fijians via his website after he left. “When this hateful dictatorship has been eradicated, all of us who once served it shall answer to the Fijian people for the part we played, and I will gladly submit to their verdict.”

As he put it to me, “at the end of all this we are accountable to the people of Fiji for our actions.” In the meantime, though, Mara can be found praising Gandhi’s model of “passive resistance” and calling on the people of Fiji to “stand up against the evil being perpetrated by the vicious and brutal illegal military junta. Enough is enough.”