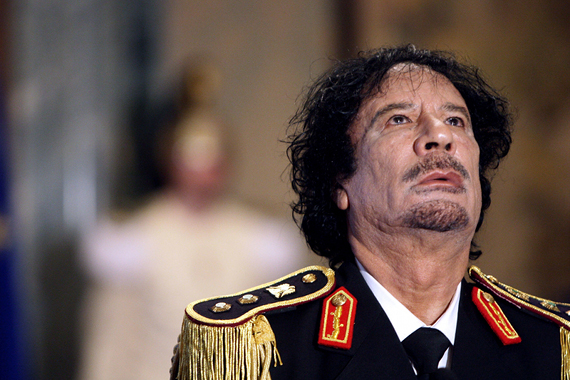 The October 19 death of Col. Muammar el-Qaddafi allows us to see more clearly an underlying force at work in the Arab Awakening. From Tunisia to Egypt, Libya, Syria, and Yemen, movements have sought to end the presumption of father-son inheritance of rule. The passing on of power from father to son has been a characteristic of patriarchal tribal societies, in the Arab world and elsewhere. In Europe, the feudal system worked the same way. Yet democracies demand that power be passed on merit and popular acclaim, and not as an hereditary right.

One of the most remarkable features of the popular revolts of 2011 is a dialectic between archaic patrilineal dynasties that call themselves democracies and popular civil resistance movements that display their commitment to genuine democracy by remaining essentially leaderless—making all of those who take part in some sense a leader. The course of the violent rebellion in Libya has followed this pattern in some respects, but not in others.

In Tunisia, early in the 23-year politically repressive regime of president Zine El Abidine Ben Ali, political activists and scholars were aware of the extent of the clan’s corruption, and as the family took over national enterprises in 1995–2005 privatization schemes, knowledge of it became commonplace. Mohamed Bouazizi, 26, an unemployed fruit and vegetable seller set himself on fire in the central Tunisian town of Sidi Bouzid on December 17, 2010, sparking the “jasmine revolution.” Workers initially kindled the uprising, and the largest cities lit up in turn after a successful general strike in Sfax on January 12. Professionals, traders, merchants, and financiers soon joined as well, many of whom had been allied with the Bourguiba regime and with Ben Ali in his early years. The upheaval expanded to the upper crust as, on January 8, a delegation of business executives from Sousse, Ben Ali’s base, called the presidential palace in Carthage to ask the president to step down.

Among the first concessions sought by the popular revolts opposing Egypt’s 32-year-old grip by Hosni Mubarak, and 30 years of rule by Yemen’s Ali Abdullah Saleh, was the renunciation of the right of their sons to succeed them. These struggles are still unfolding, as are those in Bahrain, Syria, and elsewhere, where the model of father-son succession as yet remains in place. According to anthropologist John Borneman, “The public renunciation of the son’s claim to inherit the father’s power definitively ends the specific Arab model of succession that has been incorporated into state dictatorships among tribal authorities.” Although in-depth research on what has been unfolding this year in the Middle East will require time, we can already see that these populist revolts—involving people both young and old, and both female and male—have set a strong precedent of ending father-son privileged succession once and for all.

Libya’s struggle has been the only one to turn to civil war. When the revolts spread from Tunisia and Egypt into Libya, Qaddafi immediately responded with violence. As rebels took control of Benghazi, he swore to pursue his opponents “alley by alley, house by house” and bade his security personnel to shoot unarmed protesters. The United States and its NATO allies attacked Libya after Qaddafi’s aggression against rebel-held cities, using as their mandate the doctrine of “the responsibility to protect.” While the facts about Qaddafi’s eventual death are still disputed, he is clearly the first Arab tyrant to be slain by his own populace in this year’s Awakening.

Regrettably, what began as a nonviolent struggle in Libya could not mature into a full-fledged civil resistance mobilization. Amid the claims and counter-claims of civilian casualties, one can be sure that the numbers have been high. Some estimates compute the number of civilian deaths during the five weeks between the beginning of Libya’s uprising and the Western intervention of NATO at just under 2,000. No exact overall figure is available, although in September the minister of health for the new Libyan government estimated that at least 30,000 people had been killed and 50,000 wounded during the first six months of Libya’s war.

The bloody end met by Qaddafi and three of his sons certainly represents still another case of the breaking of the customary father-to-son legacy of power. Yet at least as important as what these rebellions did is how they did it. While the Libyan uprising was turning into an armed civil war, the rebels developed a formal governing body, the National Transitional Council, which served legislative, executive and diplomatic functions. In the unarmed conflicts in Egypt, Tunisia and elsewhere, however, no such body seemed necessary.

The Palestinian intifada of 1987 was an important antecedent for the Arab civil resistance movements in 2011. It, too, was acephalous, headless, leaderless. A collective called the Unified National Leadership Command remained clandestine to evade arrest by Israeli authorities, as the uprising sought self-governance and independence for Palestinians. Despite its name, the group, consisting of representatives from the four main secular-nationalist factions in the territories occupied by Israel, coordinated actions, rather than commanding the population; local committees also made independent decisions on actions. The Command moved the focus of civil resistance from one location to another and prevented fatigue by choosing different nonviolent methods from a time-tested international repertoire.

“It was not a leadership of persons, but of organizations,” Ghassan Khatib told me, as I recounted in my book on the intifada. (Once minister of planning, he is now Director of the Palestinian Government Media Center and co-authors the bitterlemons website with Yossi Alpher, an Israeli who formerly directed the Jaffee Center for Strategic Studies.) Security was Israel’s avowed goal in its endeavors to suppress what is often called the first intifada, yet it never officially acknowledged that the uprising was a primarily nonviolent struggle. The measures that Israel used to crush it ultimately shattered the very Palestinian leadership that had advocated nonviolent tactics instead of armed militias.

Leaderless movements are of great significance in the annals of nonviolent resistance—including, just to name two examples from World War II, the Norwegian teachers’ resistance under the Nazi occupation and the Danish national resistance to Hitler. More recently, in Serbia, Georgia on the Black Sea, and Ukraine, no particular personæ were at the helm of what became national nonviolent revolutions. In the Eastern bloc in the late 1980s, countless activist intellectuals, editors, literary figures, playwrights and performers, professors, politicians, reporters, and ordinary citizens used nonviolent sanctions in altering their circumstances, changing their party-state governments, affirming their individual liberties, and improving their lives.

With examples like Mohandas K. Gandhi and Martin Luther King, Jr., in mind, observers sometimes assume that civil resistance movements need charismatic leaders. The absence of one, however, is actually closer to being the norm, not the exception. For their own survival, movements often need to function without known leaders, who can be decapitated. A profound yearning for democratic governance can also underlie a leaderless mobilization as well. Diffusion of popular leadership and power centers can be good preparation for a movement’s evolution into democratic self-rule. The headless mobilizations of the Arab Awakening are in fact closer to democracy than the elusive charismatic leader seemingly so hoped for by the media.

From now on, what is most important is genuine support for the people of the Middle East as they continue to shape their democratic futures. The first step is to recognize these headless movements as precursors to democracy. As far as Libya goes, let’s hope the bloodshed stops with Qaddafi.