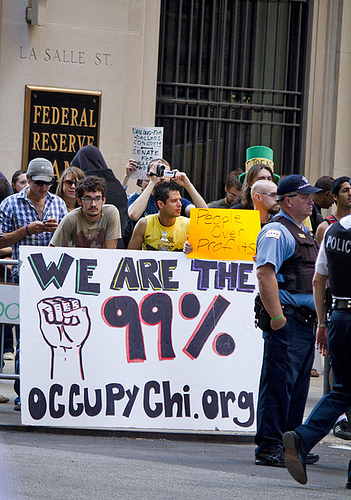 “Bring five friends with you next time,” announced Ashley Bohrer, 23, beaming with pride at Occupy Chicago’s Monday afternoon General Assembly (GA), “and have them bring five friends with them!” This is how Occupy Chicago (or perhaps better recognized by its Twitter hashtag #OccupyChi) is growing through social networking – both in person and via digital media. Bohrer, a graduate student at DePaul University working on a Ph.D. in philosophy, has been with the occupation since nearly the beginning.

“I’m upset. I’m angry. I have a personal story—like most of the people here—it’s different but I have massive student debt. I have a job but I live below a living salary.” Bohrer is animated and articulate as our conversation is interrupted numerous times by others seeking interviews, other activists sharing updates about their committee work, and people stopping by thanking her and Occupy Chicago for their presence.

As the local manifestation of the global occupation movement—see Occupy Together—sparked on Wall Street, Occupy Chicago has been at it almost just as long. Monday, October 17 marked Day 25 of an ongoing presence in front of the U.S. Federal Reserve Bank at Lasalle and Jackson in Chicago’s financial district. Over the weekend, after having been told it could not keep a permanent camp at the bank, the GA agreed to relocate its occupation—while maintaining a regular presence at the bank—to Grant Park. At the corner of the park known as Congress Plaza (Michigan and Congress), nearly 2,300 Occupy Chicago supporters rallied in support of the movement. The Chicago Tribune, recounting the events of the evening, reported that 175 people were arrested on a municipal ordinance violation that states Chicago Parks close at 11 p.m.

After Chicago Police had issued a number of very clear warnings—and people moved across the street while maintaining vigil for those choosing to be arrested—cops began to clear the park of personal belongings, tents, and arresting occupiers. The arrests were orderly and professional—good practice for CPD and the City of Chicago who will be hosting the NATO-G8 Summit in May 2012. Occupy Chicago and the National Lawyers Guild, who lends legal support, have put the number of arrests at over 250. Bohrer was one of those arrested and it was her first time participating in civil disobedience. Those arrested were detained, processed, and released on a bond of personal recognizance, but not until early Sunday morning. Supporters waited outside the jails, in the rain, until the last of Occupy Chicago activists were released.

At meetings the next day, one could see the weariness of the experience. But they returned—and with enthusiasm! Twenty-year-old Illinois Institute of Art student Juan, from the Chicago neighborhood Little Village, was a little bummed he had not been arrested. It would have been his first time doing civil disobedience and he is ready.

“Human rights are something I believe in,” said Juan passionately. “If we aren’t being heard, no matter what your race, your class, I believe in civil disobedience.” Juan also acted as facilitator for Monday’s afternoon GA and has camped out for 15 or 16 nights of the occupation. “This [Occupy Chicago] is less about specific demands or grievances. It’s more about a new community being formed of people who are socially awake and know something is wrong. We all have different opinions but are united in that we believe the system is fucked up.”

A week ago, the Chicago Tribune printed a list of “demands” from the GA. While these “demands” reflect general principles discussed that the GA is working on democratically passing through its modified consensus process requiring 90% majority for passage, Occupy Chicago has no plans of relenting in its indefinite presence at the Federal Reserve nor its 24/7 occupation. Its presence in the heart of Chicago’s Loop has been an interruption to the way the interests of the financial sector have dictated the structure and content of the political establishment. The police regularly issue warning to Occupy Chicago to vacate the public-private park (much like Zuccotti Park where #OccupyWallStreet is camping out) next to the Chicago Board of Trade kitty-corner from the Federal Reserve where activists like to gather and hold meetings. While there are differences of opinion about how Occupy Chicago should conduct itself, criticism from inside and outside the movement is not taken lightly. “Don’t criticize the movement, say we are doing things wrong unless you are out here with us shaping the movement,” said Juan. And indeed there is space for all voices to be heard—at the General Assemblies and in committees—in a way that reflects the vision of sharing power and sharing wealth that keeps Occupy Chicago going.

So what’s next for Occupy Chicago? How will the City and the movement respond to the arrests? “It is a morally reprehensible and politically unsustainable system we find ourselves in,” said Bohrer. “The arrests do not negatively impact the ideas or spirit of the movement. It [the arrests] just makes more visible the state apparatus [that protects the financial sector]. Our civil disobedience protest is against the way the political and economic system co-constitute each other. We will re-occupy.”

Occupy Chicago after arrests: we will re-occupy

Activists throughout history have put social movement work on hold for the electoral arena. Determining whether to do so is a matter of strategy and calling.

The eco-protesters who live in tunnels

When reparations grow from the grassroots

Activism will be key to overcoming the Covid-19 crisis

Immigration reform is still possible — with a strong social movement

Time is running out. Here’s how the climate movement can level up.