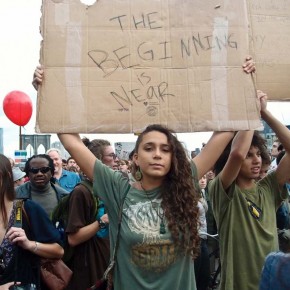 A short video entitled “Where Do We Go From Here” has been posted on the OccupyWallStreet website. Featuring interviews conducted on the one-month anniversary at Zuccotti Park, where the occupation began a stone’s throw from Wall Street on September 17, the video paints a picture of a charged but focused space nurturing thought, connection, democracy, and, most of all, hope.

As the sentiments of those interviewed suggest, the park has become a small City of Hope.

They speak of the emerging potential of this resilient action for economic equality. They share their personal determination to settle in for the long haul. Most powerfully, their riveting faces convey longing, determination, confidence and expectation.

The lyrical tone of this piece doesn’t directly allude to the bursts of official reaction that are bearing down on the movement—700 arrested on the Brooklyn Bridge, bouts of pepper spray, threats of eviction, and occupations cleared this week by police in Chicago and Oakland. Nevertheless, it suggests that, in the face of the virtually inevitable backash, this movement will seek to be centered, peaceful, organized, and creative.

At the same time, the interviewees, while hopeful, have only very general and tenuous answers to the question: “Where do we go from here?”

This question is not a new one. In 1967, Dr. Martin Luther King, Jr. published Where Do We Go From Here: Chaos or Community?  This book was written, not at the beginning of a movement as in the case of Occupy, but after the movement he had given his life to had achieved startling successes.

It was a time of assessment and of the bitter recognition that racism and economic injustice in all of their systemic comprehensiveness and depth needed to be challenged in much more powerful way than the Civil Rights movement had done to that point.  And it was a time for recognizing a stark choice: on the one hand, a society that works for all of us; on the other, what Dr. King aptly named “chaos.”

Now, four decades later, this choice persists. And so the question is asked: Where must this latest movement for economic equality go?

Of course, none of us has a crystal ball to answer this question with precision. But we have tools available to us to think about the challenges and possible directions. One of these resources is the book Doing Democracy: The MAP Model for Organizing Social Movements, written by the late Bill Moyer and published by New Society Publishers.

Bill Moyer (1933- 2002) was an activist who orgnized and participated in movements for civil rights, peace, and the environment for many years. Moyer had noticed that many activists chronically feel powerless, even when they were actually succeeding. Moyer set out to tackle this problem by creating a strategic framework based on the lessens of successful social movements. By doing so, he sought to offer a step-by-step process by which activists can “identify successes already achieved, set long and short term goals, confidently develop strategies, tactics, and programs, and avoid common pitfalls.” He called this the Movement Action Plan.

For Moyer social movements are:

collective actions in which the populace is alerted, educated, and mobilized, over years and sometimes decades, to challenge the powerholders and the whole society to redress social problems or grievances and restore critical social values.

The power of movements is directly proportional to the forcefulness with which the grassroots exert their discontent and demand change. The central issue of social movements, therefore, is the struggle between the movement and the powerholders to win the hearts (sympathies), minds (public opinion), and active support of the great majority of the populace, which ultimately holds the power to either preserve the status quo or create change.

This process means alerting, winning, and mobilizing the majority to exercise its People Power. This, though, does not happen overnight. For Moyer, this process involves a series of phases that build on one another.

When the movement does not achieve its goal early in the process, this can lead to frustration and even to people leaving the movement. While we don’t criticize a sophomore in college because she hasn’t graduated yet, we often criticize a social movement because it hasn’t “graduated” by meeting its overall goal. Like a college student, a movement goes through a series of stages that build on one another to “graduation.” In this spirit, Moyer named the following Eight Stages of Successful Social Movements:

1. Normal Times: Business as Usual. A critical social problem exists that violates widely held values. The general public is either unaware of this problem, not focused on the problem, or convinced that there is nothing it can do about the problem.

2. Failure of Official Institutions. This stage is focused on exhausting the traditional remedies of the system.

3. Ripening Conditions. Recognition by the public of the problem and its victims slowly grows. Longtime advocacy groups lend support and visibility.

4. Take-Off. A catalytic event occurs that starkly and clearly conveys the problem to the public. Dramatic nonviolent action/campaigns organized. Actions show how this problem violates widely-held values. The Problem is put on society’s agenda. Movement “takes off.”

5. Activist Failure. Despite action, the goal of the movement is not immediately achieved. Powerholders unchanged. Numbers down at demonstrations. Despair, hopelessness, burnout, dropout. Seems movement has ended. (In fact, the real work now begins. Virtually every successful nonviolent social movement goes through this phase.)

6. Winning and Activating Majority Public Opinion. The movement deepens and broadens. Growing public opposition puts the problem on the political agenda. Official channels used with some success. Nonviolent actions at key times and places. Movement promotes alternatives, including a paradigm shift (e.g., new economic policy). The consensus of the powerholders on this issue fractures. Powerholders promote bogus reforms and create crises to scare public. However, support for alternatives is increasing.

7. Success.  Majority now opposes current policies and no longer fears the alternative. Many power-holders split off and change positions. Power holders try to make minimal reforms, while the movement demands real social change. The movement finally achieves one or more of its demands. The movement raise larger issues and propose better alternatives and a true paradigm shift.

8. Continuing the Struggle. The struggle to achieve a more humane and democratic society continues indefinitely. This means safeguarding the gains won as well as pursuing new ones. Building on this success, we return to Stage 1 and struggle for the next change.

As Moyer stresses, real-life social movements will neither fit exactly nor move through the stages linearly, smoothly, or precisely in the manner outlined. Nevertheless, they reflect five broad phases: the hidden problem, increasing tension, take-off, waging the movement and success.

So, where do we go from here? There are many road maps for social change, but I have found Moyer’s model quite useful. Those who are organizing, participating in, or trying to understand the burgeoning Occupy movement may also find this approach helpful.

A few initial thoughts occur to me as I reflect on the movement in light of Moyer’s MAP. First, it is rightfully geared, not toward convincing the powerholders directly, but toward alerting, educating, winning and mobilizing the majority through its framing (“We are the 99%”) and its breadth (activities in 1,700 cities integrating people from all walks of life).

Next, Moyer would say that the movement is in Stage 4: Take Off. This stage is a heady and powerful experience, but often the movement’s goal is not met quickly. As Moyer warns, the risk is that organizers and participants “perceive that their movement is failing, and their efforts are futile. This can lead to burnout, dropout, and the dissipation of the movement.” If this begins to occur, Moyer invites organizers and participants to recognize that this is a normal phase of a successful movement that calls for building in a deeper and broader way.

Finally, Occupy envisions not simply a particular policy change, but a paradigm shift for true economic quality. This is a long-term process and will, according to Moyer’s MAP, require a deep shift in consciousness and deep participation in the larger population. Key to this shift will be a focus on deeply-grounded values and the disciplined activation of nonviolent principles and tactics. Occupy’s framing, social media strategies, and willingness of people everywhere to deliver the message in peson—in actions and gatherings in many cities and town in the US and abroad—is laying the ground work for creating and sustaining a powerful and successful People Power movement.

As the sign says, “The beginning is near”—for a long-term turning in our society and for the acceleration of this emerging movement that has the potential to nourish this shift.

People power in the making