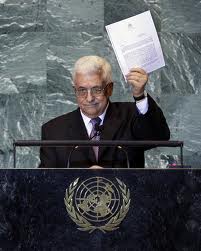 Mahmoud Abbas, president of the Palestinian Authority, said on September 23 from the U.N. podium that “our people will continue their popular peaceful resistance.” Yet CNN’s English interpretation on its translation bar below the picture omitted the words popular and peaceful. This omission (later corrected) altered the meaning of the statement—an avowal that ought to be welcomed, no matter where one stands on the issue of Palestinian statehood.

“Popular resistance” is the English terminology that the Palestinians have chosen to describe their choice to struggle nonviolently for independence, statehood, and the lifting of the military occupation. Abbas repeated the words “popular” and “peaceful.” It is not at all surprising that the Palestinians who have adopted the technique of nonviolent action have laid claim to their own nomenclature for describing it in English. No appropriate term for “nonviolent” exists in Hebrew or Arabic. It is worth noting that the Arabic word intifada means “shaking off,” an action that does not involve violence. It was used in the 1987 uprising to explain the Palestinians’ approach to ending Israeli military occupation, which was remarkably nonviolent, and had a meaning similar to the catchphrase “take back”—as in to restore, not destroy.

Settling on self-referential terminology like this is important and defining for any social mobilization that intentionally refuses to take up violence in its quest, whatever the specific goal. This choice can be shaped and constrained by language and culture.

A few other examples:

As discussions about Palestinian statehood continue in the weeks to come, it is important for international and regional powers to think more deeply and deliberatively about how people and societies build the capacity for independence and self-governance. Such a capacity can be enhanced by the practice and understanding of nonviolent struggle. The same cannot be said for guerrilla or armed struggle with its centralized military command structures that operate at cross purposes with participatory democratic principles.

During the course of nearly the entire past century, the Palestinians were promised an independent state, first by the British, then in U.N. General Assembly resolution 181 (the Partition Plan), and later by U.S. presidents of both political parties. Moreover, starting in the 1920s, the British and Zionists responded to violent upsurges of Palestinian action but not to their more common efforts at nonviolent resistance in trying to protect their way of life, as described in my book A Quiet Revolution. This pattern has been short-sighted. Responding when Palestinian factions adopted armed struggle, while ignoring, downplaying, or denying the Palestinians’ use of nonviolent action—a policy that continues into the present era—has not been in the interest of any of the peoples in the region, least of all the Israelis.

Hard data now confirm that countries that experience bottom-up, grassroots nonviolent struggle are more likely to sustain human rights and democracy once established than when violence has been used, as Adrian Karatnycky and Peter Ackerman show in “How Freedom Is Won: From Civic Resistance to Durable Democracy.” Scholars have also documented that nonviolent movements succeed more often than violent insurrections, as explained by Maria J. Stephan and Erica Chenoweth in their new book, Why Civil Resistance Works.

When institutionalized politics and constitutional processes—such as elections, political parties, parliamentary action, or even lobbying and interest groups—fail, it is essential for citizens to know how to exercise their inherent political power through nonviolent collective action. The construction of a liberal democracy, with representative governance and accountability in civil institutions, can be helped by civil resistance.

The Palestinians’ popular peaceful resistance is also important for their appreciation of how they can prevent despotism, tyranny, or oppression in the leadership of a future Palestinian state—without violence. For this reason alone, it is worth encouraging the Palestinians in their increasing turn to the practice of what they call popular resistance. In any future Palestinian state with limited arsenals and armed forces, it will be important for the Palestinian people to know how to take corrective action if violent groups emerge from within what will be at best a fragile civil society. Having strong associations that can offer a way for fight for rights and justice without armed struggle and terror is imperative for the future of both the Palestinians and the Israelis. Michael Randle writes, in his post-Cold War survey Civil Resistance, that “to resist the encroachment of basic rights by a duly elected government is not to deny democracy but to uphold it.”

It would have been helpful in recent times to recognize and reinforce the groups that have since the late 1980s adopted nonviolent means of struggling to protect their land, water, and rights. In this sense, the Israelis and Palestinians who have been working together for years in the West Bank village campaigns of civil resistance are already enacting the civility, tolerance, and exertions of cooperative power that are the bedrock of democracy. They are acting out procedures for fighting for rights that are respectful of all people involved. As the work of April Carter shows, nonviolent direct action is fundamental to democracy, can function in its absence, and also acts as a means of democratic empowerment. According to Carter, direct action is an expression of active citizenship, and “the key element … in inspiring participatory democracy is the sense of mass popular empowerment and liberation.”

Popular peaceful resistance represents democracy in the process of becoming.