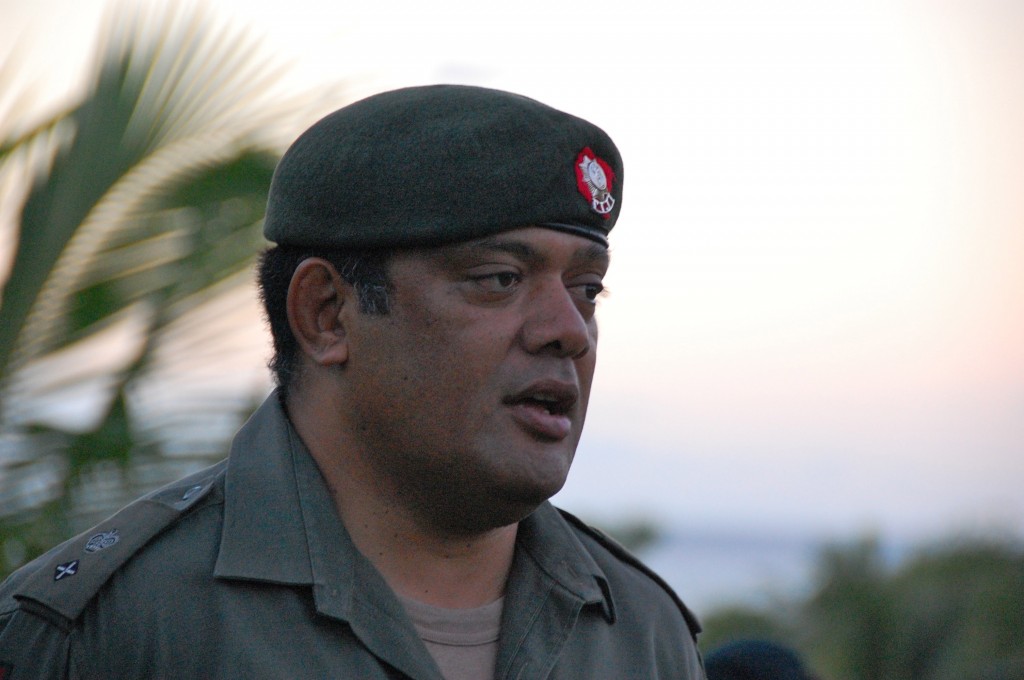 The world has had little reason to pay attention to the intensifying human rights meltdown in Fiji at the hands of the ruling military junta. After all, it hasn’t affected the bottom line: foreign exploitation of the island nation’s cheap natural resources or the discounted soldiers it supplies to the United Nations and American mercenary companies in Iraq and Afghanistan.

Fiji Water, one of the top imported bottled waters in the United States, still markets itself as an untarnished taste of paradise, while giving millions of dollars to the country’s brutal dictatorship and hiring a military-led company to run its security. Even Gibson Guitar, the favorite of rock-stars which just became the new darling of the Tea Party after federal raids on its imported wood, is busy courting the despotic regime for preferential access to Fiji’s mahogany riches, which were behind the country’s 2000 coup.

The draconian censorship of all media in Fiji means constant suppression of reports about the increasing surveillance, harassment, detentions, beatings, rape and murder of Fijian citizens at the hands of their dictatorship. International press has recently noticed that the junta is even censoring news of tourist deaths on the island in order to maintain the facade of idyllic calm.

But in the past few months, the discontent simmering in Fijian society has come spilling out through several key fractures. There have been high-level defections, calls for global solidarity by labor unions and on-the-ground protests. For the first time since the junta took power in a 2006 coup, many Fijians have hope that the ingredients of a revolution are coming together.

Fiji’s highest-profile defector yet, Lieutenant Colonel Ratu Tevita Mara, believes that Fiji is ripe for an Oceanic version of the Arab Spring. In a video posted on his site, he said the regime will be brought down by “peaceful means,” and that “we will use passive resistance, there will be no violence.” These are no doubt surprising words coming from the former fourth highest-ranking member of Fiji’s military and the army’s chief of staff. In a recent interview, I spoke with Mara, about the junta, its vulnerabilities, and what he sees as its inevitable downfall.

Mara was initially a key supporting official of Commodore Voreqe (Frank) Bainimarama’s 2006 coup — the U.S. Embassy calls Mara a “coup ringleader” in Wikileaks cables — but he has since described his government as a “vicious and brutal illegal military junta” run by a “mafia of violent and corrupt terrorists.” Mara’s words carry additional weight with Fijians as he is the son of the founding father of modern Fiji, Ratu Sir Kamisese Mara — the first prime minister of post-independence Fiji and later its president. He’s also the brother-in-law of Fiji’s current president, Ratu Epeli Nailatikau, who answers to self-appointed Prime Minister Bainimarama. Mara was charged this spring with sedition and mutiny after a military officer reported him for making a critical comment about the regime.

Mara spoke to me from Australia, where he’s a declared fugitive from Fiji after being picked up at sea by the Tongan navy in May. (Being related to Tonga’s royal family, he was given citizenship there.) The junta has filed extradition papers for him all over the South Pacific, where he’s been on a speaking tour airing their dirty laundry to regional governments and Fijian expatriate democracy groups. He has also put a series of videos on his website in which he appeals directly to soldiers and police officers to end Bainimarama’s reign, calling some out by name. According to Mara, Bainimarama’s inner circle has become increasingly insular, and that it’s this inside group of soldiers and bodyguards that has been behind the physical assaults on dissidents, including Fiji’s infamous nighttime arson attacks on the homes of perceived critics. “It’s not the whole of the military that’s doing these atrocities in Fiji, it’s only a select number of people under Bainimarama,” Mara explained.

Recently-released Fijian Wikileaks cables — explored in depth by the Australian press — document the torture, rape, and even murder of detainees that constitute the reign of Bainimarama’s henchmen. A 2007 cable reported that Bainimarama privately confirmed to EU diplomats that “if someone insults the President or the RFMF [Republic of Fiji Military Forces], of course we must have them taken to the barracks and have them beaten up.” In another 2007 cable, the U.S. Embassy related Fijian human rights reports that Bainimarama himself had joined in the beating of a senior government official, barking “don’t f*** with the military” as he did. The U.S. Embassy also reported on an incident when the military had handed over the bruised, dead body of a detainee to the police.

Fijians are arrested not only for public statements against the junta, Mara explained, but are now even taken to barracks for comments made in private conversation — a tactic he described in one of his internet videos as “more like Nazi Germany and the Gestapo, or the Soviet Union and the KGB.” A more contemporary comparison, however, would be China, where Fiji’s chief censor — the secretary of the Ministry of Information —is attending workshops on how to control the flow of information to the public.

Mara confirmed to me that “the mobile phones are tapped, the landlines are tapped.” He also confirmed that the internet is indeed monitored — a fact that I discovered on my own in 2009 after my emails were intercepted by Fiji police at an internet cafe and I was arrested for them.

“There is control on the internet, they control that. The internet monitoring is done by the internet company Connect,” which the government owns, said Mara. “I’ve sat in meetings where transcripts of conversations have been brought up to Bainimarama. Civil servants have even been sent from their jobs for phone conversations criticizing the government.” People who appear to be civilians are paid by the military to monitor their neighbors: “Reserve soldiers, they get put on the payroll. They remain in civil society, continue their normal civilian jobs, and send information back to military headquarters.” Mara recalled taxi drivers calling military headquarters with tips about seditious passengers. 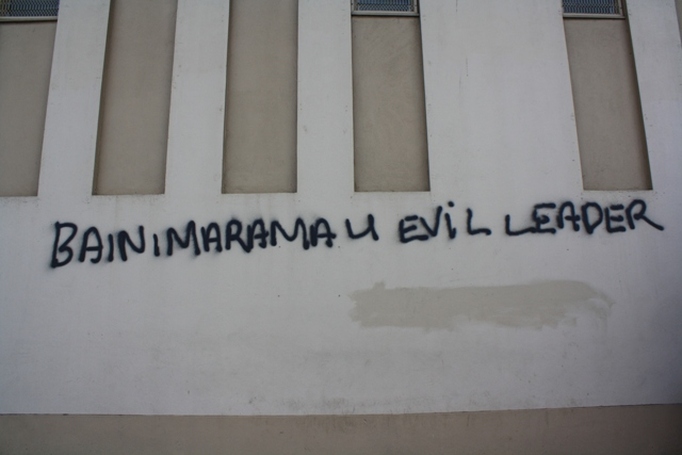 The surveillance apparatus, the censorship of media — which the regime has dubbed the “journalism of hope” — and a climate of fear around public protest have led many Fijians to use anonymous methods to communicate to each other and to the world that they’ve had enough. The capital city of Suva and other parts of the main island were recently tagged in the middle of the night with graffiti like “PM MURDERER,” “BAINIMARAMA U EVIL LEADER,” and “PM YOUR TIME IS OVER – NEW GOV’T SOON,” followed by the torching of police huts. A group calling itself the Viti Revolutionary Forces emerged to take credit, and managed to send out a nationwide text message urging Fijians to “start passive resistance now.” The military has started to arrest suspects, and five men appeared in court this month to plead not guilty to charges of sedition.

Anti-regime blogs by well-connected dissidents have flourished, and are becoming the go-to drops for whistleblowers with inside scoops about the junta. Satirical accounts masquerading as the regime have been created on social media, such as a junta Twitter account which tweets at unsuspecting foreigners who’ve made comments about Fiji (“As long as you do not criticise us you are welcome to stay. Smile for the men with the guns.”) A former Fijian government minister was arrested, and says he was beaten, for distributing an anti-regime DVD to villagers. Fijians abroad have started displaying upside-down Fijian flags at public events, as they’ve been doing at this month’s Rugby World Cup in New Zealand. (Rugby is Fiji’s national sport.)

But perhaps the most critical mass of resistance comes from Fiji’s trade unions, whose leaders have been repeatedly arrested and beaten by the military. They’re now taking the risk of being publicly quoted by Australian and New Zealand press about their ordeals, while the unions are persecuted for holding public meetings due to Fiji’s martial law forbidding unpermitted gatherings.

International trade unions have raised the alarm about the junta’s abuses and called for global solidarity. As a result, the Australian Transport Workers Union, along with their New Zealand counterparts, have even considered shutting down flights to Fiji.

The regime escalated its war against Fiji’s workers last month with the release of its Essential National Industries Decree, a hugely controversial law designed to shred workers’ rights. An Air Pacific pilot was just arrested and charged with cyber-crimes for releasing internal documents to an anti-regime blog showing that the airline, which is nearly half-owned by the Australian giant Qantas, had helped to draft the decree and paid a New York law firm tens of thousands of dollars to consult on it.

While workers continue to step up their resistance in the face of repression, there are signs that the military is losing its moral authority. This developing situation — to be discussed in part two of this series — has heightened prospects of a popular uprising. As Secretary General of Amnesty International Salil Shetty told regional press this month, “In all these places, we are talking currently about Syria, Yemen, I don’t see how Fiji is such an exception. If this level of violation of human rights continues and if people don’t have a voice and if they have no basic freedoms, in my view it’s a matter of time.”

In China, citizenship on trial