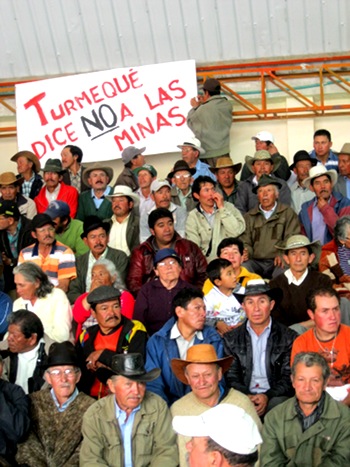 Slowly the room grew crowded on Thursday at the Cultural House in Turmequé in Boyacá, Colombia, which hosted around 750 farm workers coming together to define their strategy against the mining industry that is soon to arrive in their municipality. The message has been spreading across the valley, and people are worried: their lands will be expropriated and they will be forced to take work as coal miners, facing all the health risks that come with doing so. They didn’t ask for this to happen. Without warning, the local and national governments granted a Mexican company the rights to exploit their own people. And those in Boyacá are not alone in this fight; their case is just one among many like this throughout South America.

To the governments of countries like Chile, Argentina, Peru, Bolivia and Colombia, mining, biofuel and agricultural projects seem like a panacea for confronting economic crises and generating revenue. Although there are some cases of more sustainable development, many contracts given to national and foreign companies for extracting resources brings only short-term employment, along with long-term environmental and social consequences.

The mining industry began a revival five years ago, especially in Chile, Perú and, more recently, in Colombia. There are beneficiaries, of course, and there are victims. The former are the mining companies themselves, as well as local, regional and national governmental institutions. The mineral and metal market has thrived. But the latter are indigenous and rural populations, who face water contamination, land expropriation, cultural deterioration, slavery, prostitution and a variety of health risks. The victims, however, are starting to realize what is happening and to confront it.

After the infamous accident that took place in Chile’s Mine San José on August 5 last year—leaving 33 miners underground for more than one month—mine workers reinforced their organization, demanding better working conditions, an end to exploitation and accurate studies on environmental damage. Gold and copper mining are now the biggest threat to clean water and the environment in that country. Last July, workers from the Escondida mine forced copper prices to fall by 15% after two weeks of striking—with tremendous effect on the status quo, given that the industry represents 20% of the Chilean GDP.

In Colombia there are localized initiatives against several projects. One of them is happening in Boyacá, near Bogotá, where people in the countryside gathered to demand that environmental authorities deny the necessary environmental licenses. A similar protest was successful in Santurban, located in the northeast of the country. Around 40,000 people went into the streets there last February to oppose the mining project and its environmental implications, and the conflict spread throughout the entire country. The protests lasted for weeks, until finally the Canadian company GreyStar Resources was forced to withdraw. The movement then went even further, insisting that the government protect the area as part of the national parks system. These Santurban protests alerted other communities to the dangers of exploitation and encouraged them to join in a common fight to protect their water and natural resources.

A different situation exists in Peru, where protests are causing a proliferation of so-called “informal mining.” There, people are fighting a Newmont gold mining project—which the government supports—with blockades, strikes and protests. As a result of this, however, the value of minerals and metals increases, resulting in widespread illegal exploitation. These miners pose an opposite challenge to the government than protests alone do: they bring water contamination, dangerous residues and an increase in prostitution. As illegal mines attract workers, solitary men are making taverns and brothels a very profitable business, while having no protections under the law themselves. These mines therefore pose a dilemma to both the government and the protesters.

The root of these problems, however, lies with insensitive governments that insist on the necessity of pursuing their economic goals through exploitative mining. The governments give permits to companies covertly, often ignoring the potential for environmental and social damage. However, a broad range of initiatives throughout South America is motivating the people to demand a better balance between the benefits of mining and people’s right to have access to clean water, good health and basic safety protections.

For more information, see No a la Mina, a multinational website promoting civil resistance against mining.