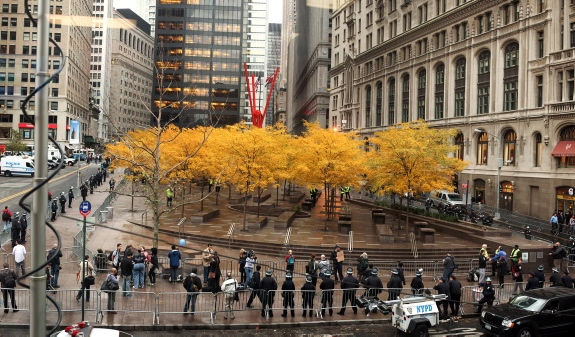 Liberty Plaza (or Park or Square) looks an awful lot like Zuccotti Park again—aside from the damaged flower beds and a broken plastic peace sign lying in the gutter. At 1 in the morning, hundreds of police in riot gear stormed the plaza, shining floodlights and tearing down tents. Sanitation workers loaded occupiers’ belongings into garbage trucks, including the books of the occupation’s library. LRAD sound cannons were on the scene, and as many as five police helicopters hovered high overhead, where airspace was closed to media aircraft. On the ground, police cornered reporters out of view from the plaza during the eviction of the protesters, some of whom locked arms around the kitchen area and nonviolently resisted removal. They faced pepper spray and batons for doing so.

When I arrived at around 2:20 a.m., riot police were preventing anyone from getting closer than a block away from the site. By the time I returned there just after sunrise, after hours following marches and spontaneous assemblies and affinity groups meeting in the streets, the place had been completely cleared and washed. It was blocked off with barricades, despite a court order that the occupiers should be allowed to return. Back in Duarte Square on Canal Street, though, where hundreds had temporarily gathered, it was surprising how positive the mood actually was.

So, then, what next? What does the Occupy movement do when its flagship occupation is, at least for now, gone?

It happens that just hours before, Adbusters magazine—which originally called for the occupation—promulgated “Tactical Briefing #18: Occupy the High Ground.” It suggested that perhaps the time has passed for the movement to be so focused on encampments, and that it might move on to bigger and better things instead. This is a notion that has come up repeatedly in my recent conversations with early organizers; after almost three months, they feel, the movement is starting to outgrow the occupation. Mostly in a good way—the working groups, websites, and other infrastructure are already at such a point that most of the occupation’s business has been happening outside the crowded plaza for weeks. Organized resistance actions are taking place around the country without being specifically tied to occupation sites.

It’s also true that the camps have suffered from problems of health, sanitation, and crime, which were the excuse for what appears to be a coordinated attack on occupations by the mayors of cities around the country. But the occupiers have insisted that they can resolve these problems themselves, and nonviolently, in contrast to their governments’ policies of forced, armed eviction. Now that these coordinated attacks are happening, they seem to call for a coordinated response.

I’m reminded of a conversation I had in the first week of Occupy Wall Street with Monica Lopez, a Spanish journalist who took part in the May 15 movement in Madrid (and who was featured in our video “The Demand Is a Process”). This occupation won’t last forever, she predicted. It shouldn’t. The time eventually came in Madrid that the movement decided it would be better off ending the occupation than keeping it going—on June 12, less than a month after it began. Since, as WNV’s Ter Garcia has reported, the Spanish movement has shifted its attention to direct actions ranging from preventing evictions, to organizing a global day of protest, to engaging the political process. And, as I recently witnessed in Greece, those who occupied Athens’ Syntagma Square are now focusing on cultivating neighborhood assemblies concerned with local issues. 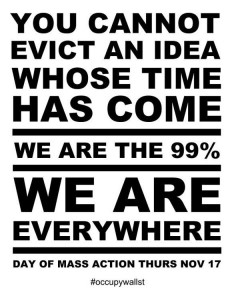 For the rise of the Occupy movement so far, though, the tactic of occupation has been absolutely essential. Mayor Bloomberg suggested in his explanation for the eviction that the encampment was not included in the protesters’ First Amendment rights to freedom of speech and assembly. However one interprets the law, though, from a strategic point of view, the encampment was precisely what made their free speech heard, allowing it to cut through the din of politics as usual and jump-start a public conversation about wealth and corruption.

Still, an encampment alone poses little real threat to the pillars upholding the power of the banks and the corporate elite that the Occupy movement hopes to undermine. Even the encampment in Cairo’s Tahrir Square, for instance, likely couldn’t have brought down Hosni Mubarak without the support of a coordinated general strike that threatened to bring down the Egyptian economy. If focusing too much on encampments distracts the movement from conducting more threatening actions like this, encampment is better left behind.

For those in it and those trying to understand it from the outside, the Occupy movement has never been easy to predict. As it enters this next phase, I’d bet we should be prepared to be surprised again.

Forced eviction takes Occupy Wall Street into its next phase