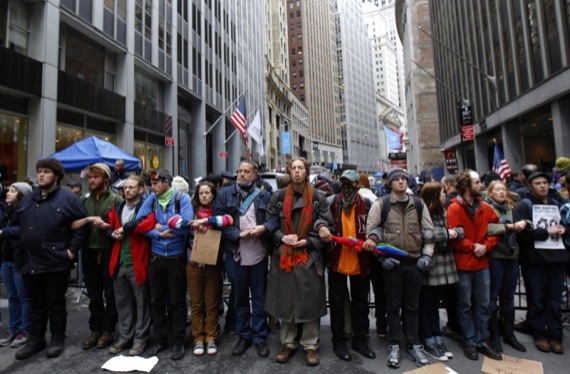 A little after 7 last Thursday morning, hundreds of protesters marched from Zuccotti Park, the scene of a massive police eviction two days earlier, into the warren of streets that surround the New York Stock Exchange.  It was the two month anniversary of Occupy Wall Street, which has introduced a new language of political confrontation—the 99 percent versus the 1 percent, Occupy!, “Whose Streets? Our Streets!”—to the national conversation. An entire “Day of Action” was in the works. For the early morning event, marchers hoped to reach Wall Street itself, or as near to Wall Street as they could get given the metal barricades, police vans, motorcycles, and riot police that have effectively privatized that narrow strip of once-public land. It was perhaps the movement’s most carefully-orchestrated action—though you might not have known it by watching the news that day.

Occupy Wall Street’s unorthodox approach to direct action was on full display Thursday morning as multiple columns of marchers encircled Wall Street. The flood of protesters stopped to chant or quickly moved on, depending on the density of police personnel arrayed to corral and disperse the crowd. Others sat down in front of barricades when the police refused further access to the public. This seemingly chaotic rhythm of the protest was, in fact, intentional.

For many days prior to the November 17 day of action, Occupiers met to map out the multiple stages of the action, noting the various intersections where police would try to bottleneck marchers, and devising routes of retreat that would allow them to re-group when faced with overwhelming police force.  In order to spread out the police presence, the march was staggered; different strands would leave minutes apart and aim for different access points to Wall Street. Although these general contours of the action were planned en masse, over a dozen affinity groups—self-organizing sets of volunteers—met on their own to plan actions-within-the action: some would break off from the main march to proceed directly to Wall Street through a Duane Reade on Pine; others planned acts of civil disobedience at strategic locations.

This organized randomness frustrated police tactics, which are best suited to corralling a single-minded mass. As a result, the police did as much as the marchers to block access to Wall Street, manhandling pedestrians and “freezing” intersections in order to stanch the unpredictable flow of protest. Perhaps the chief breakdown of police control occurred at the intersection of Broad and Beaver at around 10 a.m., where several strands of the march met after earlier sit-ins on Pine Street. Unprepared for this secondary flow, the police initially allowed the marchers to take to the street, dancing and singing—free from police violence, if only for a few minutes.

By noon, as sirens screamed down Broadway and over 150 protesters sat handcuffed in police vans, the march had sparked several articles on the front page of the New York Times website and hours of coverage on local and cable news. While the morning action had clearly succeeded in drawing more attention to the Occupy Wall Street movement, a certain skepticism haunted some of the news coverage: Was all that morning chaos really nonviolent? Did it work?

The unpredictable movements and the “diversity of tactics” employed by the Occupiers—from traditional civil disobedience to absurd dance routines—frequently cause police, spoiled by total compliance, to become panicked or enraged. The result is violent overreaction, as was witnessed on Thursday morning. On Pine and Nassau, night-sticks and bawled fists were deployed against a troop of green-clad and leaf-covered pixies; later, on Broad and Beaver, after their initial retreat in the face of an unexpected dance party, some creative officers transformed a metal barricade into a plow, using it to sweep up or knock down protesters.

Slightly earlier, police had shouted at a group of protesters twirling umbrellas, telling them to holster their rain gear. When the protesters refused to do so, an officer reached into the crowd and pulled one young, umbrella-bearing man to the ground; a circle of police formed to stomp on and then arrest him.

A minute later and a few feet behind the scrum, another officer found himself standing with the offending instrument. He pondered the medium-sized accessory for a few seconds and then, as if for the first time realizing what it was, collapsed the umbrella, tossing it—not ungently—aside, as you would upon arriving back home after a hard day’s work.

Although this carnival of nonviolent force and violent counter-force effectively attracts media attention, reporters have not quite come around to the stark imbalance between the nonviolence of the protesters and the oppressive reactions of the police. On Thursday afternoon, for instance, press reports became surreally fixated on a single act of violence that occurred back at Zuccotti Park, hours after the morning action. Apparently, a lone protester had thrown a mysterious “star-shaped glass object” at a police officer. At some point in its flight, the star cut Officer Matthew Walters’ hand and he went to the hospital for twenty stiches. Sharp, if vague, the glass weapon soared above the hundreds of thousands of words written about the “Day of Action,” as a premonition of what future, stellar assaults might be in the offing.

As Mayor Michael Bloomberg stood flanked by white-coated doctors at Bellevue Hospital to update the press on Officer Walters’ hand, photos circulated of a protester with blood pouring down his face. Reporters quickly explained why the 20-year-old boy deserved the cracked head: apparently he had thrown an AAA battery at one police officer and stole the hat off another officer’s head. If a bloody face is what you get when you throw a battery, one shudders to imagine what will happen if the police find the elusive star-hurler.

These violent acts should not be dismissed lightly. Yet there is an obvious disproportion between lone-wolf incidents of protester violence and the organized physical assaults directed by the police at lines of peaceful protesters—simply because those protesters stand on squares, sidewalks and streets where the police suddenly announce they don’t belong.

There is no doubt something forceful about protesters seeking to hold ground against riot police who deny their right to public sidewalks. There is no doubt something forceful about men and women who sit down in front of a police barricade and lock arms, as police officers shout at them. But these tactics of holding space are a clear, nonviolent rebuke to the array of police weaponry that rains down on demonstrators on a daily basis.

Four days after Thursday morning’s march, the New York Times and a dozen other news outlets fired off a protest to the NYPD: “The police actions of last week have been more hostile to the press than any other event in recent memory.” The letter recounted a scene from Thursday when police officers used a metal barricade to beat a photographer trying to snap a picture. Perhaps they had mistaken the flash-bulb for a flying star.

Jeremy Kessler is a doctoral student at Yale Law School and Yale University’s Department of History, where he writes about the history of conscientious objection. His non-academic work has appeared in The Daily and The New Atlantis.