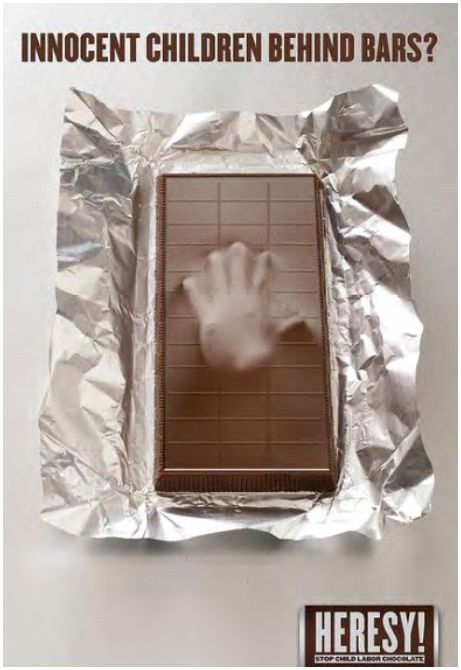 Now that you are finished knocking on your neighbors’ doors  in the gluttonous pursuit of Halloween  confectionary bliss, maybe it is time you reflected a moment on the “not-so-good” aspect of all those goodies. I’m not talking about diabetic hazard or carcinogenic artificial sweeteners (a least not in this article), but rather the grim reality of child exploitation and forced labor in the supply chain of one of the country’s most profitable corporate chocolatiers.

According to a report published earlier this year by the International Labor Rights Forum (ILRF), Green America and Global Exchange, Hershey remains the most egregious and flagrant example of corporate irresponsibility within the industry and has taken practically zero measures in order to bring its operations into compliance with industrial standards designed to eliminate forced and exploitative child labor.

Apparently, Hershey CEO James Bilbrey, who earned over 10 million dollars in 2010, can’t find room in his wallet to ensure that the West African farms from which he sources his cocoa are fair trade certified and whose quality is verified by an independent monitoring agency. It appears that Hershey views such third-party oversight as a frivolous expense that carries along with it the ‘undesirable’ outcomes of increased transparency and reduction in labor/human rights abuses; Hershey still refuses to identify its cocoa suppliers.

For over a year, labor rights advocates have been collecting petitions calling for Hershey to end its practices of forced labor, child labor and human trafficking. Over 100,000 signatures were obtained (you can still sign here), and organizers and supporters of the Raise the Bar initiative decided to personally deliver the stack of petitions to the CEO at Hershey Corporate Headquarters in Pennsylvania, in addition to sending copies of the petitions to all of the company’s board members. ILRF also held a Halloween photo-petition contest and are urging people to take a variety of actions, including hosting a screening of the Dark Side of Chocolate.

It has been more than ten years since the issue of forced and child labor in West African cocoa was made public, and already ten years since Hershey and other chocolate companies signed the Harkin Engle Protocol to address the issue… They are focused on promoting their charitable contributions to development projects as opposed to making a commitment to be accountable for conditions in their supply chain and thereby submit to more rigorous monitoring and certification programs by external actors.  This is not a question of ‘either, or’; it is a question of where the company’s first line of responsibility lies; ensuring they are managed responsibly or promoting their charitable activities.

Yet one need not go all the way to Africa in order to discover Hershey’s inappropriate and exploitative behavior when it comes to young people. Uncle Sam himself also took issue with the company’s less than transparent relationship with ‘his’ own kiddies. And just a few months ago, hundreds of foreign exchange students walked off the job at a Hershey plant citing low wages and unnecessarily difficult working conditions that kept them in aches and debt. They put together this YouTube video as a tribute to their triumph and called upon all New Yorkers to Occupy Hershey this Halloween.

Yes, Hershey is the slow-poke and bully of the industry, but companies like Mars, Kraft and Nestle are not far behind at all (check out this helpful Chocolate Report Card to help you the next time you go to the supermarket), but at least they have taken the step of accepting an ethical approach to sourcing their cocoa. May your conscience and your sweet tooth be satisfied in your quest through the realms of conscious consumerism.

The bitter side of sweetness: Hershey tricks, children mistreated