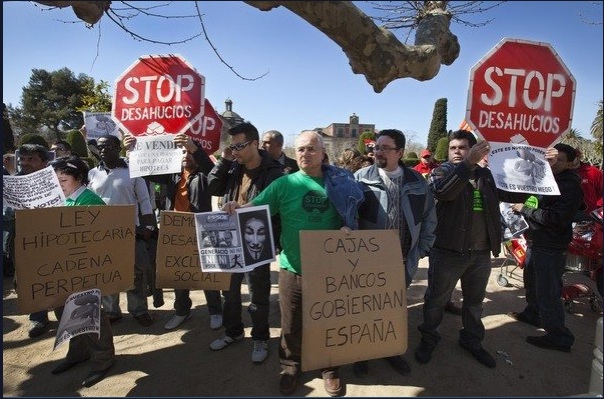 After a year of ongoing work, Spain’s premier anti-foreclosure organization, the Platform of People Affected by Mortgage (PAH), has been compelling both the government and the banks in the country to react, pushing them to make some small but positive steps toward securing the right to housing.

The PAH started in February of 2009 from a small group of citizens in Barcelona in order to demand that the Mortgage Law include dación en pago, a measure that would make possible to hand back the keys and the property to the bank, discharging all mortgage debt if the holder fails to pay the mortgage. But as more and more families were evicted from their homes, PAH took to the streets in November, 2010 with the Stop Evictions campaign, which gained even more momentum during this year’s May 15 movement mobilizations. PAH became a meeting point for people in danger of losing their homes, organized locally by citizens and activists to provide legal advice and promote civil resistance actions.

Today, PAH has chapters in more than 40 cities, and it has stopped at least 110 evictions through nonviolent resistance. Since October, hundreds of 15-M activists had been occupying empty buildings to provide living space for evicted families in cities like Madrid, Barcelona, Terrassa and Granada; dozens of families have decided to occupy empty houses themselves.

Activists associated with PAH in Elche, a city near Alicante, has advised as many as 50 families and, in many cases, they’ve discovered irregularities bordering on illegality. “There are families that have been paying a default insurance,” explains Gloria Marin, from PAH Elche, for instance. “They didn’t know that and the bank didn’t tell them a thing about it while trying to evict them.” In Elche, as in many other cities, the courts and the police have not moved to intervene against anti-eviction actions.

Barcelona, one of the cities where PAH’s work began, the response of the regional government has been even more positive. In October, thanks in part to PAH, the City Council moved to declare Barcelona “active on the prevention of evictions,” creating a commission to study each case, to ensure the right to housing and to support the inclusion of dación en pago in the Mortgage Law. A hundred other cities have taken similar action as well.

In other places, however, the situation has become a bit more difficult. In Madrid, where PAH has succeeded in stopping 17 of the 20 evictions it fought, police response has been escalating. PAH started its work in Madrid last June, but, after a month of several eviction preventions, the courts decided to increase the police presence. In July, more than 50 riot police prevented over 100 citizens from stopping an eviction.

The police presence since then has increased even more. “In recent weeks, the courts have sent in the police forcefully,” says Chema Ruiz of PAH Madrid. “In the beginning there were just a few police officers, and the evictions were easily stopped, but the situation has changed.” Last week, some people were arrested in an anti-foreclosure action, among them a photographer from the alternative newspaper Diagonal. Facing the increased police presence, PAH Madrid activists have changed their tactics, focusing more on the visit of the judicial commission to an endangered house and attempting to prevent it from approving the foreclosure.

Despite the repression of these actions in the Spanish capital, the message of PAH has been heard and echoed in mainstream Spanish politics. After the two-year campaign for the dación en pago was ignored by the two major parties, some months ago most of the country’s political parties included it in their platforms going into the November 20 election. Even PSOE, which rejected the dación en pago last June in Congress, reversed course and incorporated the proposal in its platform. But the victory of the right-wing Partido Popular in the Congress makes it impossible to know whether the PSOE’s promise would have become a reality.

Now, the regional government of Catalonia is going further and has announced to enact the dación en pago and to purchase option agreements to let families keep their homes. PAH is also working on a “popular initiative” to petition Congress to reexamine the inclusion of dación en pago in the Mortgage Law. Soon they will begin collecting the 500,000 signatures needed to do so.

Even the banks are starting to react to people’s calls on behalf of the right to housing. In Murcia, PAH has negotiated the dación en pago for 100 families, as it has for thousands throughout Spain. In many cases, after accepting the dación en pago, canceling the debt in exchange of the house, the banks consented to allow a family to stay in their home by paying subsidized rent. “It’s not because they are better now, but because we have forced them to take care of their image,” says a statement from PAH.

Some banks have launched such programs as “Supportive Leasing” in La Caixa, which offers 3,000 houses with a monthly rent between €75 and €150, or the inclusion of dación en pago in their mortgage products—though generally with very high interest rates.

Today in Spain, banks are becoming major real estate holders. Bankia alone—a bank that was recently privatized—began the year with more than €11 billion in property, making it the country’s largest landowner. Other banks, such as CAM (also recently privatized), Santander or BBVA, offer more than 20,000 foreclosed houses with significant discounts. Most of these banks has received thousands of millions euros from the government last year in bailouts. PAH calls on the government to purchase these houses from the banks in order to increase the number of public housing units, but, for now at least, the government has yet to listen.

Surviving the ups and downs of social movements

A year of small victories for the Spanish anti-foreclosure movement