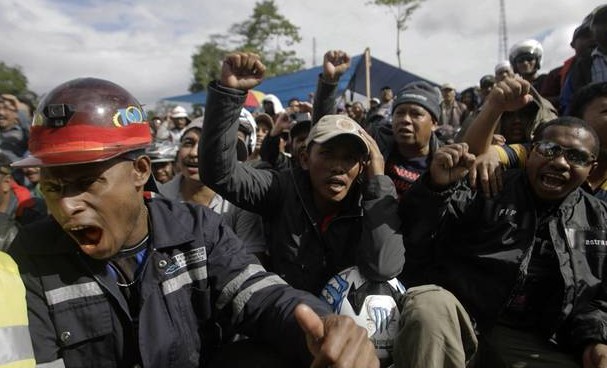 This week the union and the U.S.-based mining corporation Freeport-McMoRan announced a settlement to a three-month long strike at its Grasburg mine in West Papua. Workers are expected to be back at work within days. Although the strike has been settled, Freeport and its activities remain controversial in West Papua and Indonesia.

The workers’ union settled for a 40 percent wage increase over two years, as well as additional housing and other benefits. The workers will also receive wages lost during the strike in the guise of a one-time three month “signing bonus.” Prior to the strike, which began on September 15, workers at Grasburg were the lowest paid at any Freeport facility. The company also has mines in the U.S., South America and the Congo. (A two-month strike at Freeport’s Cerro Verde mine in Peru was suspended at the end of November pending government mediation.)

Juli Parorrongan, a spokesperson for the union, said that pre-strike monthly wages range from $361 to $605 a month. He expressed dissatisfaction with the agreement to the Jakarta Post:

However, we decided to agree on the increase because we have to consider the humanitarian aspect, given that the striking workers have not been paid by Freeport for the last three months. We were forced to agree to end the strike, but this is not the end of our struggle.

Workers had blockaded roads in the area at key points and were accused of cutting the pipeline which carries mining concentrate to the port from where it is loaded and shipped for processing. By the end of the strike, the mine was operating at 5 percent of capacity.

Two striking worker was killed and others were injured on October 10 when police opened fire at a large demonstration in Timika, the town near the mine. Attacks by unknown gunmen on a vehicle carrying police and Freeport personnel led to more deaths and injury to two others. Such attacks along the road to the mine are a relatively common occurrence, and it is not clear if the latest ones were related to the strike. These assaults against security and Freeport personnel are believed to result from conflicts among police, military and Freeport security personnel feuding over the spoils from extortion targeting Freeport, as well as conflict over freelance gold-mining efforts by local people. While these attacks are often blamed on poorly armed guerrillas fighting for independence, local police recently said that the shooters were “well trained.”

The strike by 8,000 employees at the controversial open pit mine halted production costing the Indonesian government $8 million per day in taxes, royalties and dividends, which helped to broker an end to the strike.

In the U.S., Occupy Phoenix, the East Timor and Indonesia Action Network, the IWW and United Steelworkers (USW) demonstrated in support of the strikers at Freeport’s Phoenix, Arizona headquarters in late October.

The USW, which represents workers at Freeport’s Chino mine in New Mexico, urged the U.S. Department of Justice to investigate reports that the company was making illegal payments to the police in West Papua. In a letter to Justice’s Criminal Division, the union wrote:

The Indonesian police have recently been quoted in the Indonesian media admitting that they accepted millions of dollars from PT Freeport Indonesia to provide security for the miner’s operations in Papua, Indonesia, and the National Police Chief Gen. Timur Pradopo referred to the payments as “lunch money” paid in addition to state allocated security funding, stating “It was operational funding given directly to the police personnel to help them make ends meet.”

Human rights groups estimated that the payments raised salaries of the police near the mine between a quarter and one half. The payments are illegal under Indonesia law, where official corruption is a major problem. They are illegal in the U.S. if not reported. The Foreign Corrupt Practices Act also “bans companies from paying foreign officials to do or omit to do an act in violation of his or her lawful duty,” the union wrote. It called the payments bribes:

Five years ago, the company was investigated for payments allegedly made to the Indonesian military The company reported $1.6 million in payments in 2008 to provide a “monthly allowance” to police and soldiers for security at the mine.

In addition to its labor strike, Freeport faces challenges on a number of other fronts.

The Grasburg mine has been an unmitigated environmental disaster. The disposal of millions of tons of tailings and other mine waste has decimated forests and destroyed an entire river system. Local inhabitants have been marginalized by an influx of outsiders. The company’s human rights and environmental practices have long been criticized by major institutional investors. Norway’s government pension fund, divested its Freeport holdings in February 2006. In 2008, it divested from Rio Tinto, a minority owner of the mine. The deep scars from the mining operation can be seen from space.

Last year, the about 90 Amungme tribe members, who live near the mining complex, filed a lawsuit arguing that Freeport had seized their lands illegally. According to the Jakarta Globe, they are “seeking $32.5 billion in material and non-material damages for the alleged illegal acquisition of its ancestral land” in an Indonesian court.

Despite its poor labor, environmental and human rights record, Freeport sometimes receives high marks from those who monitor “corporate socially responsibility.” Recently, Corporate Responsibility Magazine had named Freeport as the U.S.’s 24th-best corporate citizen. “How is this possible?” asked David Webster, an assistant professor of International Studies at the University of Regina in Canada. “Well, the survey’s methodology seems to pay no heed to human rights performance.  Only human rights rhetoric matters.”

Unsurprisingly, the Freeport mine is a lightening rod for the pro-independence movement in Papua. The company gained its mining permits in 1967, as Indonesia—with U.S. backing—was undermining West Papuan aspirations for self-determination. (While West Papua and Indonesia share a Dutch colonial heritage, West Papua was not included in Indonesia on independence.) At the time, Indonesia was administering the territory under a U.N. mandate brokered by the U.S. in preparation for an act of self-determination (which was a farce when it finally took place two years later). Under these circumstances, many West Papuans view the granting of mining rights by the Suharto dictatorship as illegal and the outflow of mining profits as theft that has left indigenous Papuans impoverished. These grievances have fueled broad sentiment for greater control over these and other resources, and Timika is a hot bed of pro-independence sentiment.

Meanwhile, the U.S. government has staunchly defended Freeport since it first arrived in West Papua. In Jakarta, the U.S. embassy:

has conspired with Freeport management to defeat legal challenges as well as media and Congressional inquiries into human rights violations and other illegal acts carried out by security forces under Freeport pay and direction. In 2002, it conspired with Freeport and with the Indonesian government to limit and delay an investigation of an attack that cost the lives of three teachers, including two from the U.S.

In mid-November, Occupy Jakarta’s general assembly adopted a resolution on Papua. Key points are withdrawal of security forces from the region and an end to violence to against Papuans. It called for Freeport to be brought to “justice for human rights violations, environmental damage and violence towards workers,” and putting the future of the Freeport mine in the hands of its workers and local people.

The Egyptian revolution continues at NYU

Strike at Freeport settled, even as mine’s scars linger