A couple weeks ago, a group of activists working with Rainforest Action Network’s Energy and Finance campaign hit the streets of San Francisco to bring a little truth about Bank of America’s misdeeds to its customers—not in the lobbies of the bank’s local branches, but at its ATMs throughout the city. 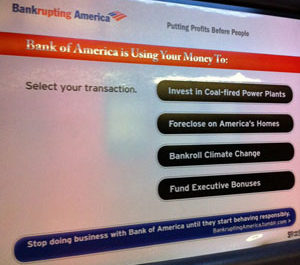 The group designed special non-adhesive stickers that looked exactly like Bank of America’s ATM screen, but with a few important differences, that were then put on all 85 of the bank’s ATMs in San Francisco.

Rather that offering the standard options, the sticker’s new menu options allowed customers to select whether they wanted their money to be invested in coal-fired power plants, foreclosures on homes, bankrolling climate change or padding executive bonuses. At the bottom, there was also a button that said, “Stop doing business with Bank of America until they start behaving responsibly,” and offered the URL of a new blog, Bankrupting America, that is targeting the bank.

Given the positive response to the action, RAN online organizer Mike Gaworecki wrote on The Understory that they have now “made the design available as a high-res PDF. It’s available here. We ARE NOT suggesting you do anything with it.”

It’s time to go on the offensive against racism

What are men doing to challenge and stop gender violence?