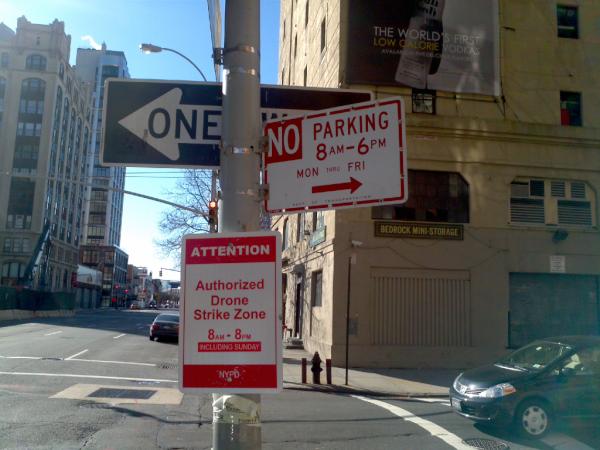 Several weeks ago, a 28-year-old Army vet, who had worked with drones during two tours in Iraq and is now a radical art student in New York, came up with a creative act of protest to raise awareness around the growing use of drones domestically by police forces across the country.

According to an article in last week’s New Yorker, over the course of several nights, the veteran (who remains anonymous) and a few friends posted eleven unusual street signs around New York City, which is apparently investigating using drones as a law enforcement tool.

Near each sign, they also stenciled a quote from a Founding Father, such as a warning from Ben Franklin that seems particularly apropos: “They that can give up essential liberty to purchase a little temporary safety deserve neither liberty nor safety.”

As Avaaz pledged to do as part of a recent petition, activists now need to buy or build their own drones and fly them over the city to back up these signs and make the reality of drones just a bit more tangible to an American public that often seems completely disconnected from the issue.