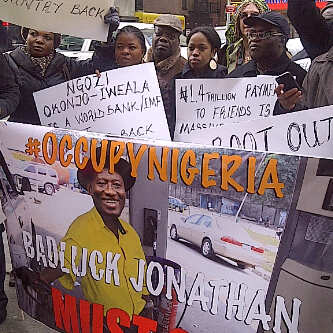 It is tough now to believe: Chidi Nwosu was murdered just a little over one year ago. He was hardly the first prominent Nigerian human rights leader to be assassinated, nor was he the last before the Occupy Nigeria movement of 2012 began taking to the streets, forming a new, nationwide emphasis on the need for sweeping economic and political change in one of the most populated and resource-rich corners of the planet. Nwosu, founder and president of the Human Rights, Justice and Peace Foundation (HRJPF), was a friend and colleague of the secular pacifist War Resisters International—but his death was anything but nonviolent. Tortured in his home while his wife and young daughter were locked in an adjacent room, he was shot in the head and dragged around the house as a symbol of what happens to those who dare take on questions of police misconduct, government corruption, and an end to rule by multinational corporations. It is no coincidence that this killing took place a short time after a major conference had been held (with Nwosu as central organizer), linking the issues and calling for a “total cleansing” of the Nigerian scene.

Fast forward 13 months: Monday, January 16, 2012 was a particularly important day in modern Nigerian history. With the government under increasing pressure based on a week of intensive strikes and street protests, and a wave of repression which included the murder of at least 12 activists by members of the Nigerian military and police forces, the early morning had a quiet beginning; the national labor organizations had called for a suspension of the strike while negotiations took place. Despite little progress at the mediation table, President Goodluck Jonathon—dubbed “bad-luck” by most of the Occupy campaigners—addressed the nation in a late morning broadcast, announcing that the price of petrol would be set at a compromise rate, below what had been charged since the first of January but more than the fixed rate which had prevailed in previous years. By late in the afternoon, several labor leaders asserted that the entire strike was to be called off, while other activists began making plans for continued street actions. Amongst the pressures on the protesters and the regime is the fact that international oil prices were beginning to rise, with the fear that even in the U.S. individual car owners would soon begin to feel the pressure at the pump.

Occupy Nigeria leader and chair of Friends of the Earth International Nnimmo Bassey is calling this ongoing impasse “a smoldering rage.” The strongly united front of government and business is somewhat uncharacteristic of the sometimes-chaotic Nigerian political scene. Anger over back-room deals, and scandalous amounts of wealth in a country with pockets of extreme poverty, has set up a situation which is unstable at best. Writing for Pan-African Pambazuka News, researcher Uche Igwe calls the corrupt politicians and businessmen “Nigeria’s vampire elite.” Likening the Nigerian state to “a giant on a keg of gunpowder,” Igwe suggests that a complete breakdown of government and infrastructure is possible. It is noteworthy that in this same three-week period since the beginning of widespread mobilizations, headlines across the country have been screaming stories of the multi-million dollar shenanigans of Nigeria’s own Minister of Justice (who also serves as the country’s attorney general) Mohammed Bello Adoke, whose recently-discovered international bank holdings far exceed any legally earned income.

Of course some prominent Nigerians have quickly spoken up in strong support of the Occupy and labor movements. Nigeria’s foremost novelist (and author of the most widely read book of modern African literature) Chinua Acebe wasted no time in publicly encouraging the actions, stating that it is the duty of every artist to “side with the people against the Emperor that oppresses.” An ardent and consistent supporter of nonviolent direct action, Acebe has suggested that the challenge now is uniting the culturally diverse 150 million-strong population. And in spite of fears and rumors about what might take place following the price “compromise,” reports suggest that millions of people have thus far taken part in some form of Occupy demonstration.

As of January 19, Occupy Nigeria activities resumed in earnest, with a major march to the Lagos state house of assembly. Rallying at the site where mass protests last week were met with the aggressive use of tear gas, Saharareporters.com reported that no such attacks were unleashed on this week’s actions—which combined a call for a lowering of the fuel rate to 2011 rates with a demand that the military send its soldiers “back to their barracks.” An important feature of the Occupy protests which has also gained recent momentum is the international character of the movement, bringing together Nigerians living outside of the country in numerous solidarity actions. “What we are seeing now is different from past movements,” noted O. Rotimi, New York-based educator and daughter of famed Nigerian playwright and dramatist Ola Rotimi. “It is a world-wide effort bringing together voices of the Nigerian community internationally. It is time that we recognize ourselves as part of the struggle.”

The future of Occupy Nigeria and the mass movement against neocolonial conquest is far from certain. Whether the loose network which has brought people together since the first days of 2012 will coalesce into a force capable of continuing strategic initiatives is an open question. The tactical nature of civilian resistance is based on more than just short-term reaction to the headlines; in addition to a long history of peaceful protest, trainings in nonviolence have marked the last decade of organization-building in Nigeria—including the convening of the 2007 Global Conference on Nonviolence and Peace brought together by civil rights icon and close King associate Bernard Lafayette in conjunction with the prominent Foundation for Ethical Harmony in Nigeria.

One suspects, though, that the deepest inspiration for the uprising stems from the events of the poorly-worded “Arab Spring” (wrongly named both because of its limiting seasonal designation as well as its inaccurate geographic scope, having always included mass actions throughout the African continent). After a year of many advances as well as defeats in North Africa, Egyptian academic Samah Selim noted that the mutual support being forged across borders and ideological lines was “the kind of solidarity which is the life-blood of any revolution.” Speaking last week at a War Resisters League-sponsored event examining the lethal use of tear gas as a global means of general repression through police violence, Selim passionately noted the radical nature of people coming together in public, open spaces. This nonviolent solidarity so graphically exhibited throughout Nigeria bears witness to the revolutionary steadfastness Selim reported upon. “They are the ones who use the violence,” she stated, “and we are the ones who stand our ground.”

Denja Yaqub, a leader of the Nigerian National Labor Congress and supporter of Occupy Nigeria, noted that the solidarity shown in the mass strikes and protests was successful and the beginning of a “collective ability to unite against [a] very tiny clique.” Yaqub, whose blog banner quotes Martin Luther King’s query “What are YOU doing for others?” added that the suspension of the strike should be seen merely as an interim phase designed to save lives and to save organizations from being destroyed.

No revolutionary can precisely determine or accurately predict which last straw will be the one to break the back of any given despot. Many differing and sometimes divergent tactics and strategies and organizational forms may ultimately have to converge before effective actions build into movements which successfully challenge power. The martyrs and the mobilizers all play a role in creating lasting change. The Nigerian movement, which has had more than its share of both, is now poised for something greater than merely minor reforms. In the words of Denja Yaqub, “the revolution is just around the corner… It’s a matter of time, and the time is getting closer.”

How organizers raised over $233,000 in one day to bail hundreds out of jail

Nonviolent Nigeria: the roots and routes of resistance