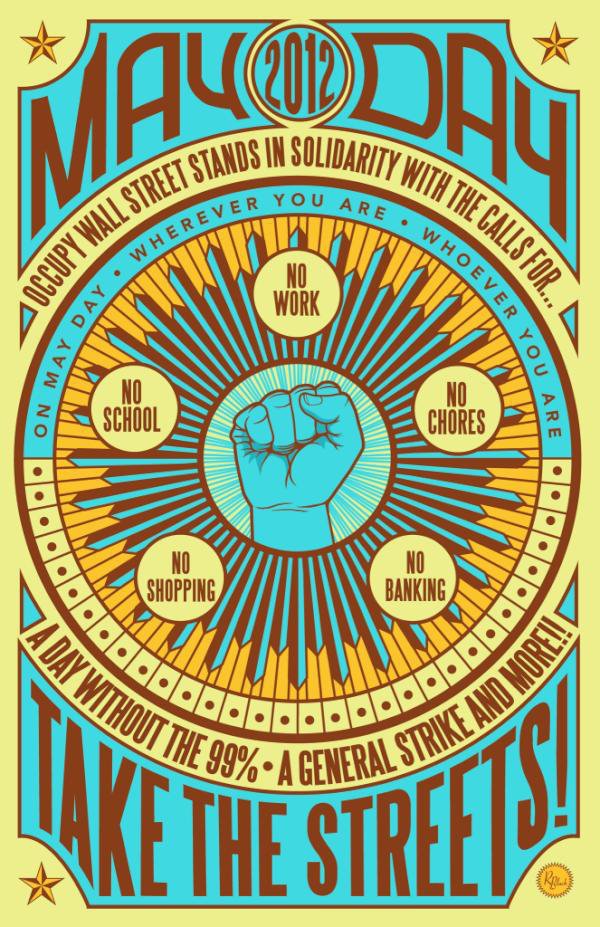 At the General Assembly meeting last night, Occupy Wall Street’s dreamer contingent got a very special valentine: the GA endorsed the Direct Action Working Group’s proposal to call for a general strike on May Day—May 1, 2012. Occupiers celebrated with cheers and Valentine’s Day balloons.

The text approved by the GA is as follows:

May Day 2012 Occupy Wall Street stands in solidarity with the calls for a day without the 99%, a general strike and more!! On May Day, wherever you are, we are calling for: *No Work *No School *No Housework *No Shopping *No Banking TAKE THE STREETS!!!!!

The prospect of an Occupy general strike has been circulating for a while already. One of the several Facebook event pages devoted to it has more than 10,000 attendees. Occupy Los Angeles began calling for a May 1 general strike as early as last November, and Occupy Oakland joined at the end of January. Occupy Wall Street’s Direct Action group tried to take a strategic approach to the idea; though many of its members had little hesitation about calling for it, they took steps to ensure there was consultation, and therefore buy-in, among some of those whose participation would be vital. Since the beginning of the year, they’ve been holding twice-weekly meetings—with as many as 150 people crowded into a church or a union-office basement—which included labor organizers, immigrants’ rights groups, artists and anarchists.

Together, these stakeholders debated what a general strike could even mean in 2012, given the poor state of organized labor, and whether making such an ambitious call would turn into anything other than an embarrassment. “It has to happen on a huge enough scale that retaliation is unthinkable,” a person noted at one of the initial meetings on January 11. While one voice that night argued that “you use this tool to gain specific ends”—the tool of a general strike—another preferred to “not issue any demands, but rather take what is ours.” From these discussions, it was agreed that the more open-ended language of “a day without the 99 percent” should stand alongside that of “general strike.”

These meetings have focused at least as much on what to do during a day without the 99 percent as what not to do. In addition to forming committees devoted to shutting the system down, there are others for mutual aid, art, education and more.

Perhaps one of the most promising aspects of a May Day action is the overlap with the May Day Coalition for immigrants’ rights, which has already been planning actions that day, and which has tremendous mobilizing power around the country—as the massive protests of 2006 showed. At the end of the January 11 meeting, an organizer of laundry workers, speaking only in Spanish, told the Occupiers, “Any campaign you have is our campaign.” The Occupiers, in turn, will have to demonstrate that the immigrants’ concerns are theirs as well.

Everything depends on what happens between now and May. “I’m really excited about how much time we have leading up,” someone said at the January 11 meeting. It’s much more time, after all, than Adbusters gave between its initial call for Occupy Wall Street in July and the September 17 start date. Now, the Direct Action Working Group has already made May Day its biggest priority, and all actions it is planning in the meantime are being thought of as creating a narrative of escalation leading to that day—beginning with yesterday’s Times Square kiss-in. The challenge is to show people, in one form or another, that something like a general strike is even possible, and to practice what taking part in it would actually mean. Above all, perhaps, it’s a challenge to the imagination; as art critic and organizer Yates Mckee says, this is a chance to begin “imagining and dreaming what a city of and for the 99 percent would look like.”

After one of the meetings, an original organizer of Occupy Wall Street looked around at her friends and said, “Look at us! We all have crazy eyes!” It was true; no one looked quite sane. But to call for a general strike in New York City in 2012, and to even begin to follow through on it, probably takes a bit of crazy.

‘Violent flank effects’ and the strategic naiveté of Antifa