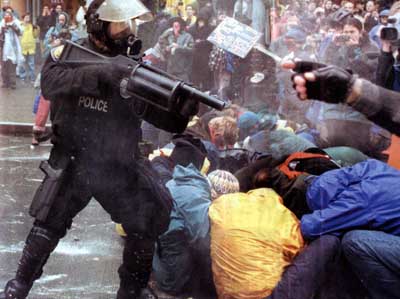 The acrid fumes of tear-gas hung in the air as a young woman, her face swathed in black fabric, readied to heave a newspaper box through the plate-glass window of the Nike Store.

It was the afternoon of November 30, 1999 and the “Battle of Seattle” was on. Tens of thousands of people had traveled from across the globe to the Northwest United States to protest the World Trade Organization Ministerial Conference, which was on track to reinforce the injustice of corporate globalization and the perils it posed to indigenous societies, labor standards, human rights, civil liberties and the environment.

I had been asked by Global Exchange (a San Francisco-based organization that has long been a proponent of fair trade) to join in as a peacekeeper during the multi-day protest. Moving through the increasingly chaotic streets, I spotted the woman with her conscripted newspaper box and, just before she hoisted it through the glass, I trotted over and asked her what she was doing.

For the next half-hour, we had a heart-to-heart.

She shared her anguish at the violence of Indonesian sweatshops that produced Nike shoes. In the light of that injustice, smashing a window counted as nothing. In fact, from her perspective, it was a good thing—it would directly identify the company as a human rights violator and would challenge business as usual. Most of all, it would help panic the powers that be into changing things in the face of this growing unrest.

It has been over a dozen years so I don’t remember verbatim everything I shared with my impromptu conversation partner, but it was something like this.

I let her know that the two of us were in agreement about this injustice and that it must be challenged and stopped. This is why I had traveled to Seattle—and why, for 15 years, I had been part of movements working for justice. To me, though, there was a better way than property destruction to achieve this goal—and the 70,000 people marching that week in Seattle were illustrating it.

Gathered from around the planet, they were dramatizing a growing movement for change using nonviolent people power. These thousands were alerting and educating the public in a way, from my perspective, that violent action would not. Violent action will not panic the power-holders but it will push away the general populace. Power-holders, in fact, love it, because it gives them an excuse to delegitimize and destroy movements. In the end, social change depends not on creating the sense of chaos and social disorder, but on mobilizing the populace to remove its support for such injustice and to exercise people-power for change.

As we talked, she put down the box. She did not hurl it through the window and eventually she melted back into the crowd. Then, when I went off to engage another person poised to hurl a different newspaper box through a window further down the block, someone else scooped up the first one and pitched it through the window.

Bandana-clad activists (estimated at only 100 to 200 people) managed to break enough windows and spray-paint enough buildings to dislodge the primary focus from the police rampage in the morning to the image of marauding anonymous activists wreaking chaos throughout downtown Seattle in the afternoon.

The criminal behavior of the police—in which thousands of peaceful protesters, sitting in the streets outside the convention hall where we engaged in nonviolent civil disobedience, were shot indiscriminately at close range by rubber bullets and blinded for a time by relentless waves of tear-gas (for which the City of Seattle years later paid out financial settlements to some protesters)—exposed the violence that the state will inflict to protect injustice. Now, however, this narrative had to share the stage with a competing one. Hence the frame that ultimately prevailed: “The Battle of Seattle.” After all, it takes two sides to make a skirmish.

In Seattle, an ambiguity was built into the action itself. We were told at a pre-action gathering the night before that the organizers had just decided that the nonviolence guidelines would be in force only until 2:00 p.m., after which they would not apply. And almost to the minute, this is what transpired: the window smashing, the spray-painting, and the clashes with the police began like clockwork in the early afternoon.

The WTO protest was a watershed event, which was immediately noticed by the press. “Protest’s power to alter public awareness,” read the December 3 headline of the San Jose Mercury News, while the December 5 edition of the Los Angeles Times declared, “WTO is Humbled, Changed Forever by Outside Forces.” It definitively put the hazards of globalization on the social radar screen. 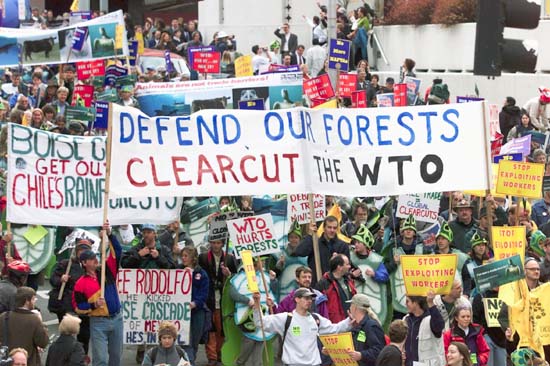 This success was due predominantly, from my point of view, to the nonviolent and creative people power of the mobilization and not to the attention-getting property destruction of a handful of activists. In fact, had the police not engaged in their even more media-genic violence (made all the more glaring by the fact that it was launched, not as a reaction to protest violence, but as a first-strike against peaceful demonstrators), the WTO protest would have likely been assessed very differently.

Unfortunately, though, the wrong lessons have often been drawn from the Seattle mobilization. In the anti-globalization and other movements since then, Seattle has often inspired strategies that provide ample wiggle room on property destruction and even what amounts to street-fighting, enshrined in the now famous “diversity of tactics” principle.

Which brings us to the conversation we are having in 2012 about violence and nonviolence in the Occupy movement.

In sorting out the two tendencies at the heart of the present discussion—“nonviolent people power” and “diversity of tactics”—it is helpful to see how they share at least three points of agreement:

They diverge, however, on the question of how each of these is achieved. From my perspective, enduring social change does not flow most effectively from violence-generated social disorder. Such action is typically seized on by power-holders to destroy movements and it often frightens or alienates the public. This seems to be borne out by much of the recent work of Erica Chenoweth and others that quantify how violent campaigns are often much less successful than nonviolent ones.

Instead, social change (as social movement activist and theorist Bill Moyer writes in his book Doing Democracy) flows from social movement that builds nonviolent people power. “Social movements,” according to Moyer, “are collective actions in which the populace is alerted, educated, and mobilized, over years and decades, to challenge the power-holders and the whole society to redress social problems or grievances and restore critical social values.” In short, this means removing the pillars of support for injustice, including the direct or indirect support of the populace and often other economic, political, cultural, or media pillars. Nonviolent action is more likely to nurture this process because:

But the effectiveness of such nonviolent action often depends on the third point of agreement: the need for powerful action.

Those supporting violent tactics often feel that nonviolent action is not powerful—and, truth be told, it is often not as powerful as it could be. Nonviolent action needs to be commensurate with the injustice one is struggling to change—which means that it needs to powerfully accomplish its goals, including dramatizing the fundamental need for change; illuminating a vision of the alternative; inviting the public to re-think this issue; and offering concrete steps for people to withdrawing consent from the status quo and to support a more life-giving alternative.

The good news is that it can be this powerful.

This power depends on creativity, clarity, strategic planning, training, discipline, execution, interpretation, and follow-up. Occupy itself is a good example of this. When it has maintained a nonviolent spirit, it has been an effective and historic force for highlighting the problem of inequality and laying the groundwork for being a force for change. Its scattered violent actions, however, have been less powerful than its nonviolent ones, because they have often muddied the issue and reframed the conversation from inequality to the violence of Occupiers. This has likely cost support for the movement within Occupy and among the larger populace.

For those of us who are committed to nonviolence in challenging massive and structural inequity, the answer (as George Lakey so eloquently stressed on this site) is not to demonize those who are committed to a variety of approaches, including violent ones. We are called to relentless dialogue with those with whom we disagree—as I attempted to do on the streets of Seattle twelve years ago. Most importantly, we are called to build a movement that demonstrates the power and effectiveness of nonviolent people power.

In the end, this will be more effective than all the arguments in the world.

Rereading the lessons of Seattle for today