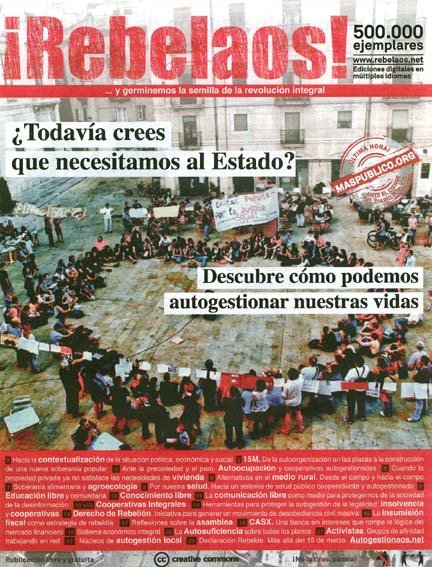 Initiatives promoting self-management are spreading in Spain. The latest one is ¡Rebelaos! (translated, in the imperative, as “Rebel!”), a small publication that has been flooding the streets since last Thursday and preaching a way of life outside the government and economic system.

“We want to present proposals and strategies for social change,” says Enric Duran, one of the members of the Afinidad Rebelde collective, which is responsible for the publication. “Although there is a lot of information about how to live without capitalism, the information is quite dispersed. We worked to gather these ideas and experiences into a roadmap for generating change.” Afinidad Rebelde grew out of a few dozen people from the Cooperativa Integral Catalana, Derecho de Rebelión and the 15M movement. It was born in mid-2011 to publish ¡Rebelaos!, and it will dissolve after distribution is finished.

This is not the first publication of its kind. In 2008, another temporary collective was formed to publish Crisis, distributing 200,000 copies around the country. In it, Enric Duran explained how he “robbed” almost €500,000 from 39 banks. “I deliberately carried out an individual disobedience action towards banking,” he wrote, “to denounce the banking system and to use the money for supporting initiatives which alert us to the systemic crisis that we are starting to inhabit and which intend to build an alternative society.” The article became known all around the country and earned him the nickname “Robin Bank.”

Now, there’s even more demand for these kinds of ideas. The cuts recently made by the government to health care and education are making Spaniards wonder whether, in the near future, they will still be able to count on state resources to maintain quality public services. In Valencia last month, students demonstrated because they didn’t have heating in the schools for the winter, and they were harshly repressed by police.

¡Rebelaos! has the goal of establishing a communication network among people who are committed to change and ready to act, as well as finding collective solutions to social problems. In thematically-arranged articles, there are proposals relating to labor, housing and education.

One proposal, for instance, is for the creation of cooperatives and citizen job centers, following an initiative of the Economic Group of Sol Camp called Marea Roja (Red Tide), which coordinated unemployed people to create new professional projects together and held monthly meetings at the doors of the official employment offices. ¡Rebelaos! also recommends squatting in unused buildings, collectively purchasing spaces and resettling abandoned villages—which in Spain number in the hundreds. These, then, can then be put to new uses, such as education centers and a self-managed health care system such as the one operated by the Cooperativa Integral Catalana in Barcelona. Since last year, its doctors have been working for and are supported by the local community.

Media is another theme in ¡Rebelaos!, especially in light of the recent closure of one of the main left-wing national newspapers, Público. The newspaper’s employees and readers are starting a campaign to buy it and convert it into a cooperative under the slogan “Más Público.” One of the articles explains, “We have the chance to create truly mass media, which is a critical need of social movements.”

One of the publication’s most controversial themes is economic disobedience. This is also advocated by the collective Derecho de Rebelion, which will launch a handbook in few weeks about tax resistance and insolvency as means of recovering freedom. Other collectives, such as the National Association of Unemployed People, have threatened to promote a massive campaign of fiscal disobedience if the government doesn’t immediately halt home evictions and foreclosures, and guarantee a basic income for all the unemployed.

Afinidad Rebelde has printed half a million copies of ¡Rebelaos! thanks to a crowdfunding campaign. They are being distributed in 320 cities all around Spain with the help of hundreds of local collectives and the 15M movement. Last Wednesday, 55,000 copies of the publication arrived in Madrid, and dozens of volunteers are working to make them reach every part of the city. But the initiative has crossed boundaries as well. Volunteer translators are working to spread the word in Portuguese, English and other languages. A collective in Nantes is preparing a version of it for French readers.

As in Greece, the conjunction of self-management initiatives and economic disobedience is seen by activists in Spain as the best way forward. In the coming months, with May’s tax season, there may be a real chance to push the government to change its policies for the better.