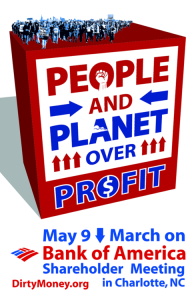 This week, thousands are descending on North Carolina for the Bank of America shareholders’ meeting. The protest comes on the heels of the successful Wells Fargo shareholder event in San Francisco, where thousands of protesters shut down the conference, and the U.S. Bank meeting in Minneapolis, where dozens of homeowners spoke out against foreclosures. A sequence of direct action trainings and spokescouncils will culminate in three marches at 8 a.m. on May 9, which will converge on the doors of the shareholders’ meeting. There, thousands will protest Bank of America’s laundry list of abuses: funding mountaintop coal removal, perpetuating student debt that has now surpassed $1 trillion nationally, laying off more than 100,000 workers in the last few years and, of course, foreclosing on millions of homeowners across the country. In anticipation, the Charlotte City Council has already passed laws criminalizing protest, as well as camping and carrying permanent markers.

Organizers are thinking about much more than just the shareholders’ meeting, however. Just as important as the mass action are the homeowners across North Carolina who are building a grassroots resistance network that will keep the pressure on the banks long after the May 9 action.

A month before the shareholders’ meeting, North Carolinian homeowner Nikki Shelton went face-to-face with an armed, 20-person SWAT team during the first home reoccupation in the state’s recent history. The action, organized by Mortgage Fraud North Carolina and bolstered by Occupy activists, is part of a growing wave of home takeovers occurring across the country, one that has spread from major urban centers all the way to enemy territory: the suburbs of North Carolina, mere hours from the international headquarters of Bank of America.

The foreclosure battle is both physical and psychological in North Carolina. People won’t talk about foreclosures outright; they tend to mention it evasively, as if in code. In the conservative suburban and rural regions of the South, housing developments exploded after World War II and homeownership is a way of life, both economically and culturally. For African Americans, homeownership is a particularly powerful symbol of freedom and upward mobility, and many tell stories of grandparents who grew up as slaves and, after emancipation, saved money to purchase a home for their family.

One fall afternoon in 2010, Nikki Shelton’s 17-year-old son broke the cultural gag order on the foreclosure crisis in a moment of unintentional organizing. Their neighbor, Marcella Robinson, was visibly pregnant and gardening in her front lawn, and Shelton’s son stopped to express his surprise at a pregnant woman doing manual labor. Robinson explained that it was soothing and that she was feeling pressure from being under constant threat from Bank of America and its subsidiary, Countrywide Financial. Shelton’s son told her that his mother, who lived only a few doors down, was going through the same thing. After making that connection, Robinson and Shelton started knocking on doors and learned that many of their neighbors were struggling not only with Countrywide’s adjustable-rate mortgages — a loan so dangerous that Countrywide executives revealed it to their staff only in a meeting in an underground bunker — but also outright fraud.

By the following May, Shelton and Robinson had assembled a group of more than 50 homeowners, Mortgage Fraud North Carolina, and held their first meeting in Shelton’s backyard. They had to meet outside because she and her family had been evicted from the home that Easter Sunday. A year later, the group would break the locks and reoccupy the house.

Shelton believes that the fight over foreclosures will require radical reeducation to completely transform how people think about the mortgage crisis. She’s tired, for instance, of reporters asking her how many mortgage payments she missed. (The answer is only one, in April of 2008.) Reporters never ask questions, meanwhile, like whether the bank illegally foreclosed on her through robosigning (it did) or whether crooked local lawyers and court clerks are aiding and abetting its fraud (they are).

Shelton sees all foreclosures as “fictional orchestrations,” a performance of greed and illegality that requires what she calls collective “conservative ignorance” in order to continue. The banks, lawmakers and the media reinforce the shame and silence that perpetuates this ignorance through intimidation (like the bank contractors sneaking around Robinson’s home taking pictures), violence (like the SWAT team that removed Shelton from her house) and the blaming of victims (like debates about whether principal reduction is a “moral hazard” for homeowners when the $7.7 trillion federal bailout doesn’t appear to pose such problems for banks).

As the efforts of Shelton and Robinson demonstrate, community building and education can spark direct action even in corners of the United States without long histories of housing organizing and where home ownership is deeply entrenched. The combination of large-scale protests, such as what is taking place at the Bank of America shareholders’ meeting, and on-the-ground homeowner organizing can turn symbolic actions into meaningful victories. In Minneapolis, for example, Occupy Our Homes combined a six-month grassroots campaign for the house of a woman named Monique White with a highly successful protest and speak-out at the U.S. Bank shareholders’ meeting. The result: Monique White won her home last Thursday — offering hope of similar victories for Shelton and other homeowners in North Carolina.

“Wall Street was not banking on the American citizens getting educated,” Shelton says. “They were not counting on us saying, ‘I know what’s going on.’ And now that they are starting to realize that we’re getting educated, that’s when the chaos starts.”

Laura Gottesdiener is a freelance journalist and former Democracy Now! producer currently based in northern Lebanon.

Organizing against Bank of America in enemy territory

After a devastating wildfire season on the West Coast, climate activists are busy mobilizing mutual aid, young voters and a just recovery.

Inside the groundbreaking student organizing drive at Kenyon College.

The fate of our rights won’t be determined by Amy Coney Barrett, but by popular struggle

Colombians take on their militarized police

Protesters grieve and demand justice for Breonna Taylor after idictment