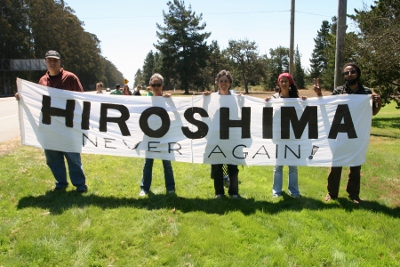 Nuclear weapons have been U.S. society’s plumb line for seven decades. Even when other issues capture our attention and the atomic threat fades in and out of public consciousness, nuclear arms and their sprawling reach — physical, political, cultural, economic, psychological — endure. They are always somewhere in the picture, even if we happen to be looking elsewhere.

It’s this constant but unseen presence that makes a story like one the Washington Post ran recently so jolting, if also so utterly predictable. “The B61 bomb: A case study in cost and needs” sets out the Pentagon’s plans to refurbish the 500 or so B61s in its arsenal. But more importantly it goes on to detail how the U.S. government plans to overhaul the nation’s vast nuclear weapons complex over the next decade, with a minimum price tag of $352 billion. If history is any gauge, it is likely to cost much more.

This news, so far as I can tell, hasn’t nudged its way into the speeches of the presidential candidates. The citizenry isn’t being asked to weigh in on this projected re-run of nuclear politics and all that it implies. While this would be a perfect time to have a reasoned and spirited debate about these plans, this hasn’t been scheduled. Assessing what being a nuclear state for nearly seventy years has meant, mulling on its consequences for us now, and envisioning what it might mean going forward — none of this is in the works. Instead we are put on notice, fleetingly, by the Washington Post.

Democracy is purportedly on display on many fronts, but rarely on the nuclear one. Since the bombing of Hiroshima in 1945, nuclearism has shaped our culture and society in incalculably far-reaching ways but no plebiscite has even been held to sort out if this is the way we want to live. Who of us voted to build and pay for — and suffer the geopolitical, psychological, epidemiological and spiritual consequences of — a globe-circling nuclear weapons regime?

That’s where the decades-old anti-nuclear weapons movement comes in. Soon after the bombings of Hiroshima and Nagasaki, it became clear that the robust and critical conversation that needed to take place about this new technology was not in the cards. Early attempts to have that open and searching dialogue — beginning with the scientists who designed these weapons — were smothered. It was out of the need to open space for a national debate on policies transmuting America into a nuclear national security state with long-lasting impact at home and abroad that prompted the emergence of a new peace movement soon after that system began to take shape. Relentlessly, it has alerted, educated and mobilized the populace to envision an alternative and to throw their weight behind it.

This movement created the conditions for the Partial Test Ban Treaty in the 1960s and the Comprehensive Test Ban Treaty in the 1990s. It rebelled against first-strike weapons that were put online in the 1980s and mobilized people power that moved power-holders off their adamant nuclearist positions, opening the space for a series of arms control agreements struck between the U.S. and the U.S.S.R. in the 1980s and 1990s. And it catalyzed a series of shifts that moved things in the right direction. For example, on September 27, 1990 — 22 years ago today — the U.S. removed the last Pershing II nuclear missiles from Germany. Installing these so-called tactical nuclear weapons nearly a decade earlier had catalyzed a massive response from the anti-nuclear movement in Europe and the U.S. and had prompted the U.S.S.R. to sign the Treaty on Intermediate Range Nuclear Forces. Exactly one year later — September 27, 1991 — President George H.W. Bush announced a series of unilateral initiatives to reduce some of the weapons in the U.S tactical nuclear arsenal, which Soviet President Mikhail Gorbachev responded to with a similarly significant list of reductions. The decommissioning and destruction of thousands of specific kinds of tactical weapons took place over the next decade.

Since these half-measures were taken years ago the prospect for a nuclear weapons-free world has stalled. Although it offered a vision of eliminating nuclear weapons in 2009, the Obama administration has not taken substantive steps in this direction, as Gareth Evans, Australia’s former foreign minister and emeritus chair of the International Crisis Group, underscored in detail this week. This administration, like each before it, is loath to surrender the power that nuclear hegemony confers. While it may weave dreams of peace, it will put its money on the threat of nuclear war, and go ahead and “modernize” the capacity to threaten and wage it. Though the U.S. is a party to the 1970 Nuclear Non-Proliferation Treaty — which requires the five nuclear nation signatories to engage in good faith negotiations to achieve nuclear disarmament — the administration plans to upgrade this system rather than dismantle it.

So we are in the midst of the next phase of the movement for nuclear disarmament, where a series of campaigns across the U.S. are pumping life into the seven-decade struggle. In Kansas City a local coalition is working to stop a new nuclear weapons parts facility. It has organized several dramatic actions and, as part of this effort, a group named Peace Planters has gathered enough signatures to put a measure on the local ballot that would forbid the city from subsidizing any facilities that produce or procure parts for nuclear weapons. At the Y-12 National Security Complex in Oak Ridge, Tenn., where Sr. Megan Rice, 82, Michael R. Walli, 63, and Gregory I. Boertje-Obed, 57, entered the facility in late July and carried out a nonviolent disarmament action entitled Transform Now Ploughshares. And at Vandenberg Air Force Base north of Santa Barbara, California, where missiles designed to carry hydrogen bombs are tested, the largest nonviolent action in 30 years took place earlier this year. A group arrested at the base — including peacemakers Daniel Ellsberg and Cindy Sheehan — will head to court October 15 to face charges for crossing the line there.

These efforts are bolstered by long-term direct action campaigns that continue to organize for a nuclear-free world — including at the Nevada Test Site (National Nuclear Security Site), Bangor Naval Base in Washington State, Lawrence Livermore National Laboratory, in northern California, Los Alamos National Laboratory in New Mexico — that are led by the Pacific Life Community, the Atlantic Life Community, Jonah House, which has been the stalwart center of anti-nuclear nonviolent resistance for 40 years, and a host of Catholic Worker houses across the United States.

For those of us who first came to political activism by tackling the nuclear arms race in the early 1980s, the announcement that the U.S. is online to refurbish and reassert its nuclear might far into the future has a glumly déjà vu feel. At the same time, we know the power of people power movements to change history. Together we can build on this emerging next phase to take action, to stoke alternatives and to prompt a powerful nationwide debate on what, buried in the back pages of the Washington Post, is presented to us as a foregone conclusion.

Why are so many migrants here in the first place?

Standing together to stand alone