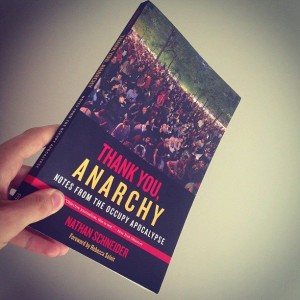 Before Occupy Wall Street was an occupation, before it spread around the world and became a media sensation, before Time declared “The Protester” the Person of the Year, Waging Nonviolence was covering it. Editor Nathan Schneider went on to report about the movement for publications including Harper’s, The New York Times and The Nation; he even inspired a scene on HBO’s The Newsroom. On September 22, Nathan’s definitive new book on the movement will be published by University of California Press, Thank You, Anarchy: Notes From the Occupy Apocalypse.

“Thanks to this meticulous and elegant book,” writes Rebecca Solnit in the foreword, “we know what one witness-participant was thinking all through the first year of Occupy, and what many of the sparks and some of the tinder were thinking, and what it was like to be warmed by that beautiful conflagration that spread across the world.”

As a special offer to WNV readers, you can get a signed, advance copy of Thank You, Anarchy. Between now and Occupy Wall Street’s second anniversary on September 17, all new members and membership upgrades at the rate of $5 per month and above will receive the book in addition to the other gifts they’re eligible for. It’s a great reason to become a member today.

Also, mark your calendar for our upcoming Occupy-related events: September 15 in New York’s Financial District, September 22 at the Brooklyn Book Festival, September 24 at Busboys & Poets in Arlington, Va., and October 2 at the Catholic Worker back in New York.

In the meantime, consider becoming a member today and be among the first to get a signed copy of Thank You, Anarchy!

Lesson plan: ‘The power of comics’