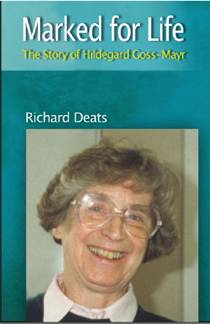 In the October-November issue of the Catholic Worker newspaper, Tom Cornell has a nice review of a new biography by Richard Deats on Hildegard Goss-Mayr, and her late husband Jean. While not known to the wider public, Hildegard and Jean are perhaps two of the most influential peacemakers of the last century. As leaders of the International Fellowship of Reconciliation, they travelled around the world for decades teaching and training people in nonviolence.

Cornell’s reflection on Hildegard is great, and – although I haven’t read it yet – I imagine the book would be a fascinating read for anyone interested in nonviolence, especially from a faith perspective. Here are few nice stories from the review:

Richard Deats recounts the story that Hildegard told that morning to a religion class at that New Jersey high school. The students were all male, working class, polite but skeptical as Hildegard described the nonviolence of the gentle Jesus and his call to nonviolent discipleship. During the question and answer period, a burly student raised his hand. “That’s all fine and good,” he said, “but what do you do when the Russians come marching down your main street? What do you do then?” It was the time of the Red Scare when the government, with media complicity, terrified the American citizenry with this image even though anyone who gave it a moment’s thought would realize that the Soviets could never manage the US Postal Service.

I paraphrase from memory now forty-six years old. “We were deeply afraid as the Red Army approached Vienna, in April 1945,” she said. “The Nazi army in retreat from Russia had burned everything in its path to the ground, everything that they couldn’t eat. It was a path of murder and rape! We had good reason to fear retaliation.” She described the scene as her father described it to her later. She wasn’t there but in another family home in Bavaria. A soldier slammed a rifle butt against their front door several times. Her father, Kaspar Mayr, opened the door and invited the Russians in. The dining room table was set. He invited them to sit and eat. Perplexed, the Russian soldier sat down and ate. Kaspar Mayr surmised from their gestures that they did not expect this reception and wondered what was going on. Then one of the soldiers pointed to a crucifix on the wall and said, “Ah, Christos!” Ah, Christos, that was it! The Russians had their fill and left the house undisturbed and maybe with the inkling of an idea, an idea that Jean and Hildegard spent their lives developing and putting into practice, the radical Christian notion of love of enemies. They introduced nonviolence to Latin America when they brought the late Dom Helder Camara, Archbishop of Recife-Olinda in the impoverished northeast of Brazil the works of Martin Luther King translated into Spanish. Later, with Adolfo Perez Esquivel, they helped establish Servicio Paz y Justicia in Buenos Aires, Argentina.

Richard Deats describes Jean and Hildegard’s part in the preparation for the events that drove the Marcos family from the Philippines and the installation of a democratic government. The Goss-Mayrs had gained the confidence of Cardinal Jaime Sin, Archbishop of Manila. His support cooperation were crucial. The bishops together called for support of the freedom movement and opposition to the Marcos government. Richard Deats, having been a member of the faculty of the Protestant seminary there, had an intimate knowledge of the country. He joined Jean and Hildegard to establish dozens of nonviolent training programs across the country to give the people, whose frustrations had heated to the boiling point, the knowledge and the means to achieve change through nonviolent direct action.

What will it take to ban the bomb?

Marked for Life: The Story of Hildegard Goss-Mayr