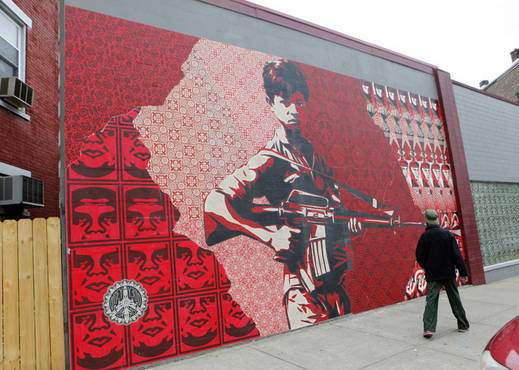 Renowned street artist Shepard Fairey—known best for creating the iconic Obama HOPE poster—caused a stir in Covington, Kentucky last week with the unveiling of a new mural, depicting an Asian child soldier brandishing an automatic rifle. The proprietor of the business who offered up his wall was not pleased and quickly covered it in white paint. According to Cincinnati.com, “He didn’t think his location across the street from an elementary school was an appropriate place for an image of a child soldier.”

Fairey, however, was unaware that his mural directly faced an elementary school. Had he known, Fairey said he might have made alterations. Nevertheless, he defended his work saying, “I felt like it was very obvious that it was about promoting peace and discouraging violence but not everybody agreed, obviously…It’s not hurtful so much as it is discouraging that there can’t even be a discussion about it.”

Surprisingly, though, the school and the city seemed just as disappointed by the business owner’s decision to paint over the mural.

She said she wished the mural could have stayed up so teachers could have discussed it with their students, and she stressed that the city of Covington did not play a part in the decision to paint over the mural.

Kudos to Covington for showing that provactive and political art has a place in small-town American society.

Protests against tuition hikes continue to spread across UC system

The Art of #BlackLivesMatter

As coronavirus opens the door to big changes, the left’s most attractive vision faces pushback