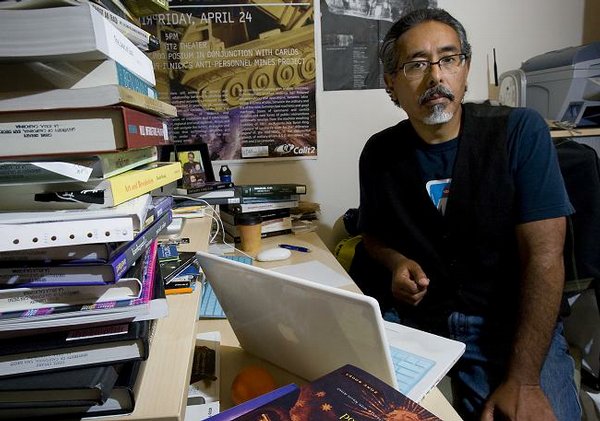 Earlier this moth, the LA Times did a story on UC San Diego Professor Ricardo Dominguez, who led what he called a “virtual sit-in” that targeted the university president’s website. According to the Times:

When protesting students spilled into University of California campus courtyards in March, Ricardo Dominguez took to the streets in his own way — digitally — leading a march to the online office of the UC president.

“Transparency,” hundreds of protesters wrote, over and over again, in the search box of the home page.

The jammed website responded with an error message: “File not found.”

The protesters’ message: Transparency doesn’t exist in the UC system.

It was a virtual sit-in, an oft-used tactic from Dominguez’s academic specialty at UC San Diego: electronic civil disobedience.

Dominguez, who was hailed just months earlier by his university and other major institutions for his work creating the immigrant cell-phone, now faces serious disciplinary measures:

According to Dominguez and a faculty group, the university has launched at least two probes: One to determine whether creation of the phone was a proper use of public funds, the other to see if legal grounds exist for filing criminal charges for the virtual sit-in.

The charges, they said, could lead to disciplinary measures and the revocation of Dominguez’s tenure. Dominguez’s salary was $65,000 before furloughs.

He is also facing attacks from Republican congressmen in his county, who feel that his work is a waste of tax-payer money. But beyond that question, and more to the purposes of this site, I wonder what others think of virtual protest tactics. Keep in mind, this is something Dominguez has been pioneering for quite some time. The Times explained the beginnings of his work in New York in the 1990’s:

With fellow new media artists and social activists, he co-founded the Electronic Disturbance Theater, which developed virtual protest tactics against computer systems across the world. The online protests flood network servers with automatic “reload” requests that can disrupt and slow systems, but not destroy data, Dominguez says.

The group targeted, among others, the Frankfurt stock exchange to protest mining investments in Mexico, and the Mexican government for its military actions against the Zapatista rebel movement. Dominguez likens the protests to thousands of people standing in the middle of the information superhighway, or massing as if they will.

In 1998, for example, the U.S. Defense Department, anticipating a virtual attack from the Disturbance Theater, set up a program to divert the virtual swarm to a nonexistent website, the New York Times reported.

There’s no doubt Dominguez has been able to elicit a response. In most cases, this would be a sign of effectiveness. But victory, that’s another story. What do folks think? Can we ever expect to obtain victory from behind a computer screen? More and more people have been choosing this method of protest (e.g. Second Life and Facebook), likely because it’s low-stakes participation. But the type of virtual protest waged by Dominguez goes a step further, and could arguably be compared to sabotage and property destruction—actions that rightfully raise ethical concerns. Overall, however, my sense is that this is a form of protest worth exploring and if it proves to be a just and viable means of waging dissent then, by all means, it should be considered a tactic within the nonviolent arsenal.

Stephane Hessel — the embodiment of resistance lives on

The rise of virtual protests and what to make of them

A nationwide grassroots movement led by the Gwich’in people may soon reach its long-sought goal: permanent protection of the Arctic National Wildlife Refuge.