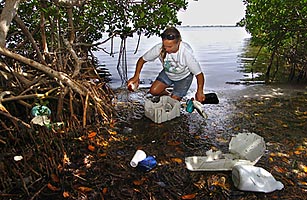 BP is responsible for one of the worst environmental calamaties in the history of mankind, but now it’s not even letting some 4,000 volunteers, including 300 boat captains, in the Florida Keys help clean up the mess. According to Time magazine:

BP (and the Deepwater Horizon’s Unified Command, which BP runs with the Coast Guard and other agencies) has so far insisted on complete control of the cleanup operations. A BP spokesman told TIME that the only appropriate way for interested boat captains to become involved would be to register with the Unified Command’s Vessels of Opportunity program. Never mind that according to BP’s numbers, only a third of the 7,200 boats “under contract” through the program are in active service.

To make matters worse BP and the Coast Guard haven’t let any of the local volunteers begin to organize a preemtive response. Not until oil is within 72 miles, they say. But that is hardly enough time to protect the 180 miles of coastline along the Keys. So, rather than wait for their homes and land to be destroyed, people are starting to take matters into their own hands.

A group called Adopt a Mangrove is assigning kayakers their own mangroves to clean if oil comes. Volunteers are monitoring shores throughout the islands for signs of oil. The Florida Keys Environmental Coalition formed to connect boat captains, scientists, environmental activists and various agencies. [Laura Fox, owner of Danger Charters in Key West] coordinated a cleanup of Man Key, a mangrove island west of Key West (oil is easier to clean off a beach that is in good condition). “It was all women, actually,” she says. “Thirteen women in kayaks, clenching knives in their teeth, cutting monofilament fishing line off the mangroves and clearing trash. We brought 35 bags of trash off the island.”

In addition, others set up a series of town halls, crashed closed-door meetings between city officials and BP representatives, as well as organized discount haz-mat and animal rescue training. This collective effort forced BP to promise it would fund $10,000 for more haz-mat training and hire a local towboat operator to keep an eye out for approaching oil.

Obviously these are small victories, but judging by the attitude inherent among Keys residents, they are ready to keep the pressure on BP.

“I just talked with BP yesterday,” says [Patrick Rice, dean of marine science and technology at Florida Keys Community College]. “I told them flat out, ‘If you come down here and start doing what you’ve done in Louisiana, you’re going to have a revolt. They’ll shut down U.S. 1. You won’t be able to bring any of your contractors in or out.’ “

Is it time to put the Baby Trump blimp to bed?