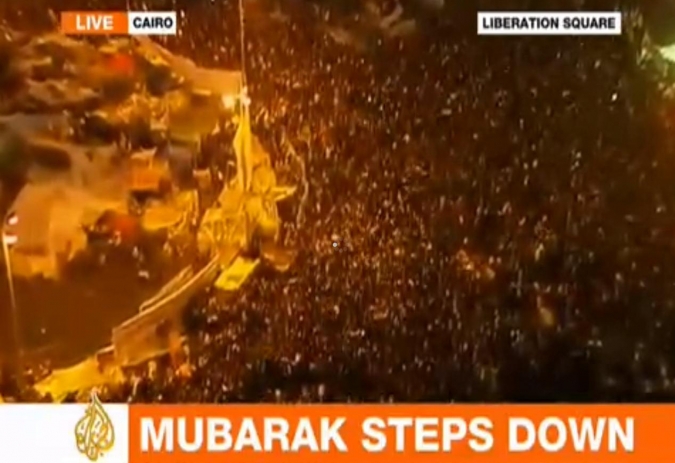 Celebrations are rocking Tahrir Square following the announcement that President Mubarak is stepping down after 30 years of dictatorial rule. 18 days of Egyptian protest and occupation of Tahrir Square forced his resignation and the transfer of power to the Supreme Council of the Egyptian Armed Forces. It remains unclear what role Vice President Omar Suleiman, who made the announcement of Mubarak’s departure after a confusing 24 hours, will have in the immediate future. The pro-democracy movement is ecstatic during this incredible, historic moment that no one could have predicted just a month ago. Not only is this an opening for a New Egpyt, but the future of the political and religious landscape for the entire region of the Middle East and North Africa.

February 11th is a day of milestones; today marks the 30th anniversary of the Iranian revolution, and 21 years ago, Nelson Mandela was freed by the Aparteid regime in South Africa. But those past examples also remind us that this is a beginning, not the end.

In this moment of ecstasy, jubilation is the only response. Victories for justice, freedom, and democracy are few and far between these days. But it must be remembered, as so many protesters are saying so eloquently about on Al Jazeera, building a meaningfully democratic society will require people to continually stand up for their rights. (Let’s hope, for instance, that there isn’t need for another revolution against the military.) It has been difficult to keep up with all the interviews and who to attribute the statements to, but here is a small sampling from a mature, committed revolutionary: “This battle is only the beginning. We’ve gotten rid of Mubarak, now it’s time to get rid of the Mubarak dictatorship.” “We must continue the struggle to topple the whole, corrupt system.” “Unity is crucial at this stage. We need a democratic society based on social justice.”

Today is a beautiful affirmation of the power of ordinary people who, with courage, tenacity, and a commitment to nonviolence, are capable of changing the world. The world will look back on these past three weeks (and longer) to understand the organizing, the risks, and the context that made the Egyptian revolution happen. A price was paid, but Egypt is now free. There is much work ahead and many concerns swirling around, but the sun will rise tomorrow on a different Egypt. To the Gift of the Nile, Good Night!

What happens to the Bernie Sanders movement if he loses?