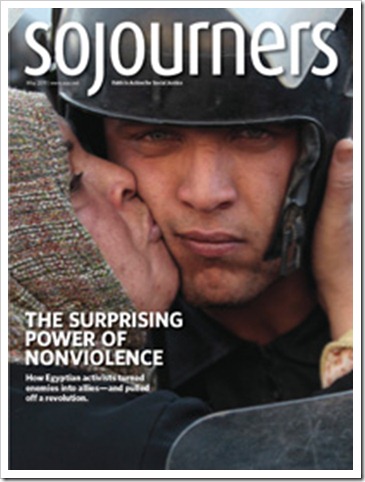 The May issue of Sojourners has several great articles on nonviolence that are worth reading if you have the chance.

In “People Power,” Erica Chenoweth succinctly explains the reasons why nonviolent movements have been significantly more successful over the last century, based off the results from her research on hundreds of violent and nonviolent movements over that period. Her forthcoming book with Maria Stephan, entitled Why Civil Resistance Works, will no doubt be an important addition to the academic study of nonviolence.

Sojourners assistant editor and friend of this site Rose Marie Berger has a great feature called “Nothing Spontaenous About It,” that discusses the extensive effort over several years by organizers and activists in Egypt that led to the nonviolent uprising that forced Mubarak from power in February.

And in “Freedom Fighter,” Sojourners web editor Jeannie Choi has a wonderful interview with Bernard Lafayette, in which he discusses the lunch counter sit-ins, his relationship with Martin Luther King Jr. and his thoughts on nonviolence today. One of my favorite parts is where he talks about how he dealt with the fear of death during the civil rights movement. Lafayette says:

…when we left for the freedom rides, we knew that death was a possibility so we wrote wills just in case we didn’t come back. But you have to consider not how you’re going to die, but how you’re going to live. You have to live for a purpose and your life has to be meaningful, and you have to be doing those things that are most important to you in your life, rather than being wholly concerned about death.

The issue may still be available on newsstands or each of these articles, and a couple others on nonviolence, can be accessed online here.

Why now is the time to connect the pipeline fights