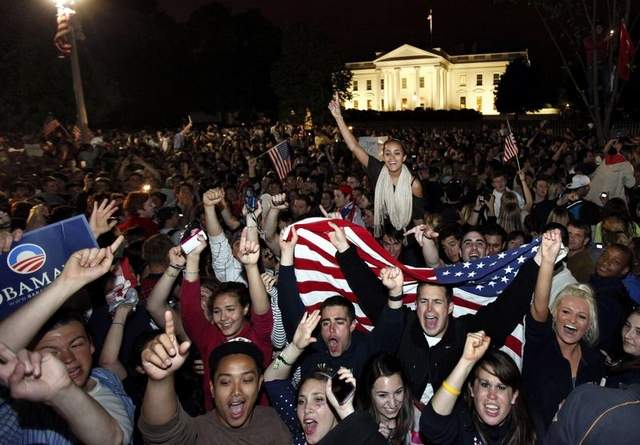 It is not a good time to be a pacifist in the United States.  In fact, it usually isn’t, but with the recent killing of Osama bin Laden and the drunken and not-so-drunken revelry that followed, historical context, international relations, and the long view take the back seat.  As with the events of 9/11 and the ensuing wars of Iraq and Afghanistan, to question – not even dissent from – the legality, efficacy, or wisdom of violence is tantamount to treason (a distinction I don’t find particularly helpful, at least as a Christian anarchist).  But to question the assassination of bin Laden, which is increasingly looking like an execution (but that does not seem to matter to most of us), is to put oneself on the wrong side of justice – at least according to President Obama’s versions of it.

For my part – as so many peace-loving people around the world – the thousands killed during the 9/11 terrorist attacks were tragic and scary.  That sentiment does not matter if I also sympathize with the Afghan or Iraqi people who, too, have been traumatized.  It does not matter if I care about certain adherents of international law that prevent summary executions of people.  There is something wrong with me, says America, that I am disturbed by bin Laden’s death, Obama’s comments, and Americans’ responses.  Again, all of this does not condone anything about bin Laden or al Qaeda – but that does not matter in the age where critical thinking, moral authority, and creative nonviolence are weakness and stupidity at best.

The events of May 1, 2011 held a mirror up to our faces, showing the real depravity – “the banality of evil” to borrow Hannah Arendt’s famous indictment of complicity with authoritarian violence – of who we are as a nation.  I will certainly be labeled any number of grotesque names that one dare not utter in front of grandma, but such is the nature of these kind of events where our true colors bleed through whatever facades we cast upon ourselves.  I have learned more about myself and those around me by how they have responded to the news of bin Laden’s death and the national reactions.  I am heartened, even surprised, that so many others are troubled by the celebrations in the streets.  I find solace that others do not feel more safe that the apparent mastermind of al Qaeda – a claim worth disputing, but, again, such criticality is not welcome in the mainstream political discourse – has been dispatched.

But even the kindred spirits of peacemakers, in the U.S. and abroad – cannot shake the terrifying feeling that I feel on my shoulders and weighing in my stomach.  Sure, the possibility of another terrorist attack exists (but very few of us, I reckon, are actually cognizant of that kind of fear on a regular basis).  But what I find most terrifying is that I now believe justice no longer has a home in the United States of America.  I had long wondered, but now I know.  America – as a nation at its core – believes in vengeance and violence.  There is something fundamentally wrong when the recipient of a Nobel Peace Prize orders and supervised the assassination of an unarmed man who was under indictment by a U.S.Grand Jury on terrorism charges.  As judge, jury, and executioner, both the Bush and Obama administrations, their JSOC cohorts, and the military industrial complex they represented decided a long time ago that someone needed to die for 9/11.

For me, the spiral of violence continues, making peaceful resolution and management (nonviolent options) nigh impossible.  There is no shortage of criticisms and ad hominem attacks on those of us who reject the logic of violence – even if our opponents, like al Qaeda, do not.  Somehow, such a perspective makes us the morally reprehensible ones when all we call for is space for dialogue and critical conversation that puts bin Laden, 9/11, Iraq, and Afghanistan in its proper context.  This is not liberal hogwash of leftist conspiracy but the heartfelt wish of those of us who have friends, family, and loved ones on all sides of these conflicts.  Sure, the causes and effects of international terrorism are necessarily complicated.  And to honestly examine those cause means not just pointing the finger at others but looking at our own prejudices and policies, as a nation.  None of this is easy, but neither was the JSOC operation that killed bin Laden.

I reject that the American habits of violence and imperialism is inevitable, but unless we seriously believe in a fundamentally different way of resolving conflict – and committing ourselves, our resources and our energy to developing alternatives to violence – the war on terrorism is bound to continue.  The popular response of bin Laden’s death, in spite of all the prominence that nonviolence received this past Spring (a deadly blow to al Qaeda-type, violent resistance), reveals how deeply embedded violence is in the soul of America; “it’s as American as cherry pie.”

What if they gave a war and nobody paid?

The cycle of violence continues