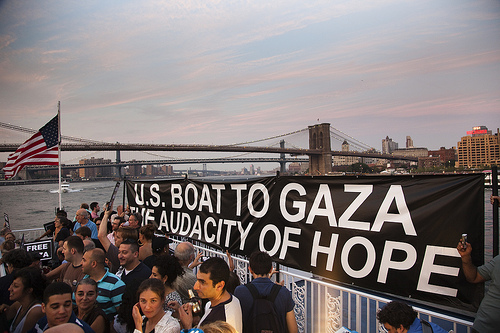 More and more, activists expecting to confront armed state actors – including intelligence officers, the military, and police – should be mindful of the skepticism and propaganda against them that is put forth by the national security apparatus.  This is especially true for activists and humanitarian workers engaging in nonviolent action in the Middle East, namely, Israel.

As the Freedom Flotilla 2 nears Gaza with hopes to break the four-year Israeli siege and blockade of the Palestinian Strip, a hushed anxiety is building while the Free Gaza Movement (and others) waits to see what will happen when the ships meet the Israeli Defense Forces (IDF) off the Gazan coast.  Last year, the Freedom Flotilla was intercepted by Israeli special forces who boarded the Mavi Marmara flying the Turkish flag.  Nine activists were killed in a struggle to prevent the boarding of their ship by the IDF.  Although there are competing claims to the circumstances of Flotilla activists’ deaths, the killings were unequivocally condemned by the UN Human Rights Convention:

The conduct of the Israeli military and other personnel towards the flotilla passengers was not only disproportionate to the occasion but demonstrated levels of totally unnecessary and incredible violence. It betrayed an unacceptable level of brutality. Such conduct cannot be justified or condoned on security or any other grounds. It constituted grave violations of human rights law and international humanitarian law.

What remains clear is that the risk of Israeli intervention and violence toward humanitarian and human rights activists continues to remain high.  As Kathy Kelly reported previously on Waging Nonviolence regarding her participation on the U.S. ship The Audacity of Hope, a public and principled commitment to nonviolence is not a guarantee that all will be well;

There is some risk involved in this flotilla. The Israeli government threatens to board each ship in the flotilla with snipers and attack dogs. A year ago the Israeli Navy fired on the Turkish ship, the Mavi Marmara, from the air, then documented its passengers’ panicked response as their justification for executing nine activists, including one young U.S. citizen, Furkhan Dogan, shot several times in the back and head at close range. It then refused to cooperate with an international investigation.

Of particular concern for the Flotilla should be the conflation of nonviolent resistance with terrorism.  A recent report from The Meir Amit Intelligence and Terrorism Information Center (ITIC)  suggests that IDF be prepared to defend itself against nonviolent activists.  It is somewhat disconcerting to read ITIC’s interpretation of nonviolence and nonviolent tactics to be just a savvy public relations move by activists to embarrass the IDF and coax them into violent struggle: “The use of nonviolent tactics is planned for the upcoming flotilla to the Gaza Strip. In effect, it is liable to be translated into hard violence directed against the IDF.”

While the ITIC concern for IDF safety is not unusual, after all it is what security forces are trained to do, the ITIC recommendations trigger concern for the unarmed participants of the Flotilla.  Beneath the veneer of bureaucratic security reports lies a thinly veiled justification for use of lethal force against unarmed (or even disproportionately armed in the alleged case of violent struggle by activists on the Mavi Marmara) activists.  But from the analysis of ITIC and the actions of the IDF special forces, execution-style killings are an appropriate response to “passive resistance” tactics that include (as reported by the ITIC):

1) Barricading themselves in the various wheelhouses and engine rooms (considered strategic locations) to make it difficult for the IDF to take over the ship.
2) Resisting removal through “going limp.
3) Bringing VIPs onto the upper deck to serve as human shields.
4) Throwing objects at Israeli Navy boats as they approach the ships, or at IDF soldiers.
5) Physical confrontation with IDF soldiers aboard the ships, using cold weapons (there were firearms aboard the Mavi Marmara, although the flotilla organizers deny it).
6) Spreading barbed wire and other obstacles on the decks to make it difficult for IDF soldiers to board the ships.
7) Verbal abuse directed at IDF soldiers and the State of Israel.
8 ) Causing difficulties for Israel after operatives have been detained (non-cooperation, refusing deportation, using legal tools and the media).

Critiques of nonviolence often operationalize nonviolent resistance in an either/or fashion.  If you are not completely nonviolent – which is to say passive, non-retaliatory, uncreative, a stoic martyr – you are considered violent.  While violence and nonviolence might best be understood, from a tactical or strategic perspective, on a continuum, the state cannot conceptualize nonviolence in this way.  Because state actors rarely understand nonviolence, every dissident is considered to be not just potentially violent but to be seeking an opportunity to use violence for its cause.  The state is always looking to use force – as well as an excuse to justify its use of force by blaming its victims, as was the case of the Mavi Marmara.

This is one of the reasons why transparency, training, and a steadfast commitment to nonviolence is probably an activist’s best defense against state aggression and violence.  Consider the recent FBI raids of prominent anti-war activists in Chicago and Minneapolis.  Or the historical cases of police violence used against groups like the Black Panthers.  To be sure, the Black Panthers advocated armed revolution, but many of their members were targeted – or executed in the case of Fred Hampton – when they posed little or no actual threat of violence when targeted.  All of this is to say that the state does not hesitate to use violence to suppress political dissent or protect their vital interests.  Israel and the Freedom Flotilla is no different.  The IDF, as can be seen through the ITIC reports, will exploit any potential act that can be perceived as violent to be regarded as a threat to Israel’s security and IDF soldiers’ safety.

In some ways, the threat of violence coerces one into nonviolence.  From this perspective, it should be clear that nonviolence is employed not just as a tactic to gain momentum for the movement but also can be used to de-escalate the threat of violence and ensure the safety of both activist and opponent.  Obviously, this did not happen on the Mavi Marmara.  Such tragic, unnecessary violence – likely employed by Israel to deter future flotillas – cannot be blamed on the dead.  What can be learned, though, is the utmost importance of methodically and clearly communicating ones’ nonviolent action – in word and deed – may lessen the outbreak of such violence when confronted by an aggressor.  Let us hope that the Freedom Flotilla 2 can remain nonviolent in the face of extraordinary stress, pressure, and intimidation – both for their sake and the sake of the Gazan cause.

What will it take to stop alt-right efforts to ‘unite the right?’

What the midterms mean for the climate movement