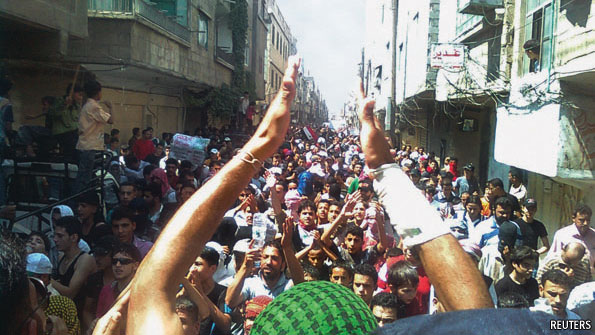 If you are looking for a solid, in-depth analysis of the situation in Syria right now, I’d recommend a recent piece in the Economist, which has some great insights into the protest movement and the strength of Assad’s regime. While the article concludes that it is unlikely that Assad will fall, at least any time soon, it goes on to paint a picture of a pro-democracy movement that is strong and growing.

…Syria’s opposition has gone from being a few scattered groups holding spontaneous, isolated protests in March to become a nationwide force.

More than 100,000 people now demonstrate every Friday and the regime cannot rein them in, though it has closed roads to restive towns, reinforced the borders and restricted access to the internet. Demonstrations have been held in at least 150 towns and villages in all corners of the triangle-shaped country.

…Syria’s opposition is becoming more coherent, as well as more widespread. It is centred on a youth movement based outside the capital. Its detractors are right when they say that few articulate leaders have emerged, no formal structures exist and many of the demonstrations have taken place outside big cities.

But this is no peasant revolt. It has the support of large parts of the Sunni Muslim clergy. University graduates and longstanding dissidents, on the fringes at first, now march alongside day labourers.

The article goes on to argue that many of the regime’s traditional pillars of support – from the economic elite and Assad’s own Alawite minority to the Christian and Kurdish populations – are beginning to wobble, at least in part because the uprising has done significant damage to the Syrian economy. Apparently, business is down by about half, unemployment is up by fifty percent, and billions of dollars have left the country.

And as is often the case, the very visible repression against nonviolent protesters continues to drive more Syrians into the opposition.

Syrians used to look at neighbouring Lebanon and Iraq and conclude that stability mattered more than freedom. But the killing of so many countrymen this year is changing that view. “We have become citizens, when once we were sheep,” says a middle-class Damascene. Fear of the security forces, which once kept millions at home, is ebbing. No authoritarian state can survive a sustained decline in its authority—and the government’s writ is shrinking visibly. The police no longer issue speeding tickets or parking fines. Unlicensed traders in the souks—once chased away—now occupy prime spots. Illegal construction is rampant.

The only group that has apparently remained firmly in Assad’s corner has been the military, and even this crucial pillar of support isn’t as monolithic or strong as it might first appear.

The top brass—mostly staffed by Alawite loyalists—has given no hint of switching sides. And now that they have spilled so much blood, their options are limited. Even so, months of cracking down are taking a toll. In some hotspots troops are short of rations and depend on local people for food. Expanding operations further will be difficult. A number of units are being kept out of the fight because they are not trusted, especially ones filled with Sunnis. Manaf Tlass, a senior commander in the elite Republican Guard and son of a former defence minister, is staying home for unknown reasons.

According to some analysts, only a quarter of the total armed forces of roughly 400,000 is well equipped and ready to fight—and of these, only half, or 50,000 men, is really reliable. Twice that number is demonstrating each week. So far, the regime has been lucky in that the uprisings have been sequential, moving from one place to the next. If the protesters rose up at once, the regime could lose control. That is beginning to happen.

These are all signs that the perseverance of the pro-democracy movement in Syria is paying off. If they can continue to grow in numbers and attract people from across the county’s traditional class, ethnic and religious lines to their camp, Assad can only hold out for so long.

Moreover, with Syria’s economy taking a serious hit because of the protests, the movement may want to consider diversifying its tactics and focusing more on those, like strikes and boycotts, that will increase the financial cost to Assad and his cronies of refusing to give in to the opposition’s demands.

What will it take to stop extrajudicial killings in East Africa?