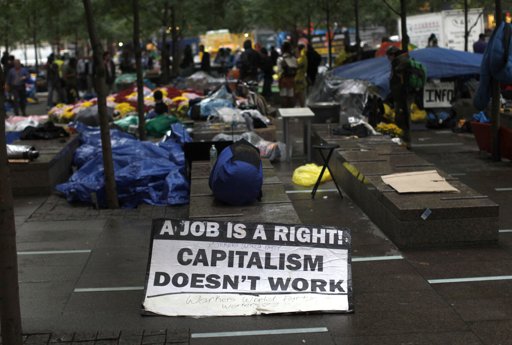 “I am convinced that if we are to get on the right side of the world revolution, we as a nation must undergo a radical revolution of values. We must rapidly begin the shift from a “thing-oriented” society to a “person-oriented” society. When machines and computers, profit motives and property rights are considered more important than people, the giant triplets of racism, materialism, and militarism are incapable of being conquered.”

Dr. Martin Luther King, Jr., “Beyond Vietnam: A Time to Break the Silence”

To be radical—stemming from the Latin radix meaning root—suggests that it is about getting at the heart of a matter. Dr. King cut right through to the source of injustice and over forty-five years later, are we witnessing the rebirth of a radical revolution of values that Dr. King prophesied? Is #OccupyWallStreet and its comrades nationwide “on the right side of the world revolution?” In that bold speech Dr. King gave a year before his death, publicly breaking from the civil rights movement’s acquiescence to the status quo support of American involvement in Vietnam, King warned that “a nation that continues year after year to spend more money on military defense than on programs of social uplift is approaching spiritual death.” Has the United States, by spending upwards of $3 trillion on wars in Afghanistan, Iraq, Yemen and Libya and maintaining over 1,000 overseas military bases in more than 50 countries, reached a moral, economic, political and spiritual tipping point?

#OccupyWallStreet is well into its third week of camping out at Liberty Plaza. On October 1, The New York General Assembly—the “official” spokesgroup of #OccupyWallStreet—released a document, “Declaration of the Occupation of New York City,” naming its reasons for the occupation. A brief glance at part of the manifesto gives a snapshot of the state of the union.

We, the New York City General Assembly occupying Wall Street in Liberty Square, urge you to assert your power.

Exercise your right to peaceably assemble; occupy public space; create a process to address the problems we face, and generate solutions accessible to everyone.

To all communities that take action and form groups in the spirit of direct democracy, we offer support, documentation, and all of the resources at our disposal.

Thousands peaceably assembled in more than 500 cities nationwide is a phenomenon that demands to be noticed.  The loosely-connected but well-coordinated and steadfast occupation of public spaces are something this nation has not seen since the 1960s.  Ordinary people are continuing to awake to the power of collective nonviolent action.  But do we really know what we’re in for if we are serious about getting the kind of deep, structural changes we want?

The celebratory fervor surging in America’s Left—even in the face of police overreaction and brutality—may risk mistaking the trees for the forest.  Large gatherings—protests, rallies, occupations like these—are a show of power and a shot of energy to waning movements.  #OccupyWallStreet is breathing life into a debilitated Left and worn-out Americans.  But as it stands, #OccupyWallStreet is a symbol of resistance and represents the potential of revolutionary action that can transform Wall Street and company.  It has not yet moved into the kind of active resistance—boycotts, work stoppages, noncooperation, tax refusal, disobedience, blockades, etc.—that has strategic pressure points and staying power that forces change. Even the 700+ arrests of demonstrators in New York—an amalgamation of state repression, activist courage, and social media savvy—is not yet the kind of resistance needed to take down corporate power.  But none of this is to undermine the incredible success, energy, building momentum an ongoing creativity and commitment of #OccupyWallStreet.  The movement is exactly where it needs to be as it attracts thousands, if not millions, of supporters before its propelled into its next stage of nonviolent social change.

A sobering analysis of the protracted struggle ahead—the risk and sacrifice and courage it will continue to demand—can prepare us for the long haul. A warning to us all: the oligarchs (and, perhaps more importantly, its cadre of ideological supporters) of the corporate state will not go gently into that dark night. It will go kicking and screaming, unashamed and uncaring of how many lives it brings down with it.

At its core, #OccupyWallStreet and other progressive movements—the peace movement’s plan for a Washington, D.C. occupation which began yesterday, the environmental movement’s Stop the Pipeline, a whole host of social, economic, and environmental justice groups organizing protests in Chicago for the NATO-G8 summit in May 2012—are protesting and revolting against empire and its deadly consequences, the brunt of which is born most by the poor, marginalized, dispossessed and the earth.

Invoking “empire” is sure to elicit a knee-jerk reaction of being “too revolutionary,” not only from detractors of #OccupyWallStreet, but maybe even from some its ardent supporters in the mainstream Left. Consider some of the more vocal “demands” that have surfaced around these nationwide occupations (it must be noted that no “official” demand(s)—for better or for worse—have been issued by #OccupyWallStreet; see Mark Engler’s summary of the demands issue):

Demands such as these seem radical—revolutionary even—but from the perspective of global capitalism, they are not. The demands are oriented toward reforming the less noble parts of American democracy and stabilizing an economy that works for the 99%. John Nichol’s reporting for The Nation quotes a number of mainstream liberals—congressional leaders and union presidents—indicating growing support for #OccupyWallStreet among certain segments of business leaders and politicians. But lest we be deceived, be wary of such support. Consider how support for the occupation is framed:

“It’s clear what this movement is all about. It’s about taking America back from the CEOs and billionaires on Wall Street who have destroyed our nation’s economy. It’s about creating good jobs. It’s about corporate America treating its workers and customers with honesty and fairness and paying its fair share to stimulate the economy,” —Teamsters President James Hoffa

“We have been inspired by the growing grassroots movements on Wall Street and across the country. We share the anger and frustration of so many Americans who have seen the enormous toll that an unchecked Wall Street has taken on the overwhelming majority of Americans while benefiting the super wealthy. We join the calls for corporate accountability and expanded middle-class opportunity.” —Joint Statement by Co-Chairs of the Progressive Caucus

Nicholas Kristoff’s op-ed in The New York Times that simultaneously celebrates #OccupyWallStreet and affirms capitalism is revealing of how political liberals are characterizing the protests: “if a ragtag band of youthful protesters can help bring a dose of accountability and equity to our financial system, more power to them.” But there is a problem—global capitalism cannot be reformed to work for the 99% and that is the nature of empire: it does not share power, especially the multinational corporations. In this current historical milieu, empire means global capitalism and its stalwart supporters in the power elite—governments, corporations, religious and education institutions, and the militaries of the world.

The scholarship of Michael Hardt and Antonio Negri has been invaluable in contextualizing empire outside of the traditional nation-state framework by situating power in the intersections of globalization’s multinational corporations, constitutional entities (domestic and international polities), and democratic spaces (the United Nations, NGOs, etc.). That is, empire today is more than just America. It is deeper, more pervasive—touching every part of our lives. The reach of global capitalism and the institutions that support it, justify it, and defend it are powerful indeed—and, important to note, not totally evil.

At the height of the Roman Empire, the seat of power and authority was centrally located—“all roads lead to Rome.” The empire of global capitalism—which is much more amorphous and porous in a predominantly post-modern society than its antiquated predecessors—resists centralization. Wall Street is a symbol of global capitalism. No doubt, there are very real manifestations of empire’s largess in Manhattan’s business and cosmopolitan districts: luxury condominiums, extravagant restaurants and shopping, an onslaught of media-driven consumption, advertisers technologically painting the streets and the skies with commercials. But behind the image of Wall Street are people and institutions that are engaged in power relations to protect the vital interests of global capital. An ideology has been created out of these power relations that is so powerful, so dominant, that even as the #OccupyWallStreet protests unfold, it is near-impossible to name it. Maybe that is why the movement has been so reluctant to making demands. How do you demand the end of empire? Really. How does one realistically make that demand without sounding absurd and without being a hypocrite? That’s the point: you can’t. But it must be done.

The question, then, is one of vision—of dreaming—that #OccupyWallStreet must consider: How far are we willing to go? And is the support from the power elite of union bosses and politicians complementary to that vision—will they join us in that paradigm shift away from empire and global capitalism into something new, something unknown, something that is being formed as we speak? These protests are not about handouts or specific policies, even though debt relief and ceasing cuts to social spending would undoubtedly make life easier for all. Rather, #OccupyWallStreet is about a paradigm shift of how power is conceived and consolidated in politics, economics, social relations, and society in general. It is about King’s revolution of values: a comprehensive shift away from racism, militarism, greed and poverty to a vision of community, economic and environmental justice, equal rights and responsibilities across racial, gender, class, sexuality, and religious differences. Indeed this is a revolution—but the real struggle is just beginning.

*Part Two will be a more in-depth look at global capitalism’s imperial ideology and what #OccupyWallStreet may face as an anti-imperial movement against it.